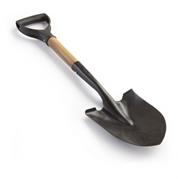 ﻿ “And you shall have a spade among your weapons; and it shall be, when you will ease yourself outside, you shall dig with it, and shall turn back and cover your excrement; For the Lord your God walks in the midst of your camp, to save you, and to give your enemies before you; therefore shall your camp be holy…” Deuteronomy 23:14-15

There’s a colloquial expression in English – “Don’t [choose your favorite term for defecate] where you eat.”

A possible source for this sensible teaching is this week’s Torah portion, Ki Tetze. Moses instructs the men that in addition to carrying weapons, they are all supposed to carry a shovel, and when they need to relieve themselves they are to do it outside the camp, and bury it and cover it. The reason given is that God walks in the camp, so the camp needs to be kept clean and holy.

Naturally this is also good advice from a hygienic perspective – keep the germs associated with excrement far away from you eat, and it will help keep you healthy. This is advice that is still very current and important to follow. Many health problems have been caused by food supplies contaminated by human waste.

That concept – “don’t crap where you eat” – has come to have a meaning similar to “don’t shoot yourself in the foot.” Take care not to do things that are self-destructive, that will harm you, because you are careless. Take precautions to protect your best interests.

I am furious that the Netanyahu government recently announced the approval of over 1,000 housing units in the West Bank, in disputed territory. After months of effort on the part of US Secretary of State John Kerry we finally have Israel and the Palestinians sitting down again to try and negotiate a peace agreement, and as if to say, “well, we’re not really serious about peace” the government announced major construction projects in the territories.

It doesn’t matter whether the building is in places that will almost certainly be part of Israel in any future peace agreement. The announcement looks like ill will, and the rest of the world, including our greatest ally, America, condemns us again, and for what? Yes, it has some domestic political benefit. So Bibi is telling the world his coalition politics are more important than peace and more important than world opinion.

A deal with the Palestinians is of tremendous strategic importance to Israel. The ongoing occupation of the West Bank has cost Israel billions of shekels in cash and more than that in harm to our standing in the world. Having good relations with Europe and America is of vital strategic importance to Israel. Our economy is driven by high-tech and tourism. Pissing off our customers could cause grave harm to our economy. Every time the government does something like this it is giving ammunition to the BDS crowd.

By announcing more building in settlements a few days before scheduled peace talks, Netanyahu’s government is putting a big stinking turd on the dinner table. We are harming our own interests.

Fallacy of the Proportional Response