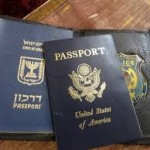 The Israeli press has been in a stir the last few days over the “Israeli” Nobel Prize winners who haven’t lived here in decades — taking it as a sign of Israel’s “brain drain” problem, whereby many of our best and brightest leave for greener pastures, often in the United States, because Israel either treats them like crap or pays them a fraction of what they can get elsewhere.

The phenomenon is known (somewhat disparagingly) as “yerida,” which means “going down,” the opposite of the term used for people who immigrate to Israel, “aliyah,” which means “going up.” A very high percentage of Israelis — over half — have considered moving overseas for financial or other reasons.

In this week’s Torah portion, Lech Lecha (which happens to be my bar mitzvah parsha, so I’m partial to it), Abraham sets out on his spiritual journey, leaves Haran, goes to Israel.  God makes all sorts of promises to Abraham — I’ll make you a great nation, I’ll bless you, I’ll make your name great, etc., — and despite all those promises not long after arriving in Israel there’s a famine in the land, and Abraham has to leave for Egypt in order to make a living.  This could sound familiar to those who have to leave Israel because of the challenging financial situation of living in a place where salaries are low, and to make up for it taxes are high and the cost of living is high.

But the difference between Abraham and the recent Nobel Prize winners is that Abraham came back.  He left Israel for a few years while the famine was in the land, but came back as soon as he was able.

And maybe this is the real model for Jewish life.  Like Abraham, I heeded the call of “lech lecha,” go, leave your home, move to Israel.  But I did keep my American passport.  So far I haven’t had to leave Israel to make a living, but I’m also ‘keeping my options open.’  And since I work for an American company, in a way I get to have the best of both worlds: I can leave Israel “virtually” to make a living, while still living here in this amazingly powerful spiritual center of the universe (at least for Jews).  I think it’s a great idea for every Jew in the world to have two passports — an Israeli one that demonstrates his love of and connection to Zion, and whatever passport he happened to be born with, or whatever passport he needs to support his or her family.

A Visit to the Greek Patriarch