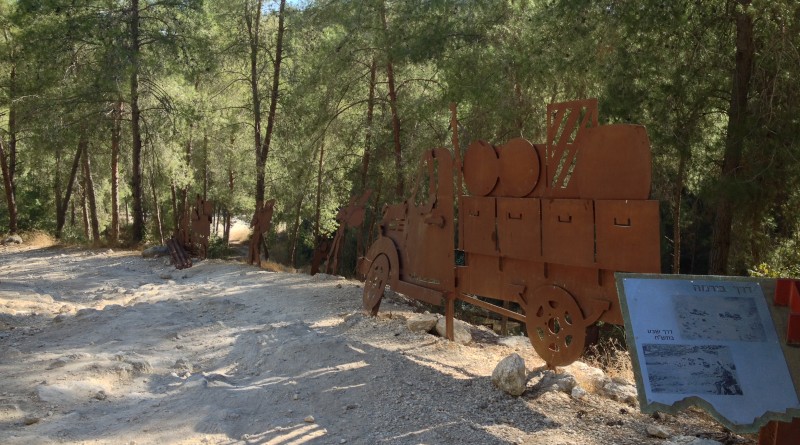 The Burma Road. In late May of 1948 Jerusalem was under siege.  The residents did not have enough food, water, or medical supplies.  Arab Legion forces had managed to seize Latrun, and deny the Jews access to the highway to Jerusalem.  The Arabs not only controlled Latrun, they had well fortified control of the road further up as well.  The remains of convoy trucks that were knocked out by Arab gunfire can still be seen today on the Tel Aviv – Jerusalem highway. Mickey Marcus, an American Colonel who became the first Israeli general in nearly 2,000 years led the effort to build an alternative route to Jerusalem: the Burma Road, named after the famous route over the Himalayas.  The movie Cast a Giant Shadow, starring Kirk Douglas, is an excellent film that includes the story of this road.

Today’s run took me up this historic road.  Today it’s peaceful, scenic, a lovely place for a hike.  65 years ago building the road must have been hell – the unrelenting heat in June, sniper fire, the sense of desperation to get the road built before Jerusalem surrendered.

I decided I’d try taking my bike and riding back down to the car.  I was a little nervous about this plan – I wasn’t sure if the Burma Road itself would really be suitable for a bicycle.  I locked the bike at the finish point near Beit Meir and drove back to the Armored Corps Museum at Latrun where I parked the car, and was out on the trail by a little after 8am.

The trail starts out winding around the Trappist monastery at Latrun (established in 1890).  Just past the monastery the trail takes you a monument in honor of the 7th Armored Brigade, which fought in the Battle of Latrun – and every war since. The trail then crosses some agricultural fields before climbing a hill near Neve Shalom, a Jewish-Arab coexistence village. From their website: “”Waah-at i-sal-aam” / Ne-vé shal-om” is Arabic and Hebrew for Oasis of Peace: an intentional community jointly established by Jewish and Palestinian Arab citizens of Israel. The village is located midway between Jerusalem and Tel Aviv-Jaffa.”  It’s a wonderful idea – the sad commentary is that it should be unusual for Jews and Arabs to live together.

Just past Neve Shalom, 2 miles from Latrun, the trail connects to the original Burma Road. After a few miles through the woods it comes to one of the most famous sections of the road, the Serpentine Trail.  There are sculptures there that commemorate the convoys that saved Jerusalem using this road.

The trail continues on the Burma Road through Eshtaol Forest and past a spring before reaching highway 38, the road to Beit Shemesh.  Once I crossed the highway I felt like I was now getting into the vicinity of Jerusalem – only another couple of days on the trail and I’d be at my house.  I took a break in the park there, where there was also water available.  This particular park is called “Jeep Road National Park.”  Not the most creative, but it is descriptive.

From here I had covered over 2/3 of the day’s distance – 7 miles out of 10, just 3 to go – but the last three miles were a serious climb, over 900 feet. Not an outrageous gradient (the trail up Grouse Mountain in Vancouver, Canada climbs 2,800 feet in 1.8 miles), but still enough to let you know you’re working harder. About a mile and a half from Beit Meir the trail goes past a couple of more military monuments, describing the battles in 1948 for these particular hilltops. One of the monuments is for the Palmach, the elite fighting force of the Haganah, the pre-state Israeli army.

The road was very rugged, steep, and rocky in this section – I would not have wanted to go down it on my mountain bike.  Fortunately I saw a dirt road across the way that looked in much better shape, and Google Maps satellite view confirmed that it went through, so I decided I’d take that road back.  It worked out great.  Was much faster riding down than running up! I stopped at a café in Neve Shalom for lunch – some very good hummus.  Was back at the car and heading for home by 2pm.

The start of Day 22 — the monastery at Latrun

The sign warns of danger, archaeological dig. But the water tower doesn’t look THAT …

The Jewish-Arab village of Neve Shalom

Map of the Burma Road.

Crossing highway 38, near highway 1 — now it feels like I’m getting close to Jerusal…

A memorial to fallen Palmach fighters near Beit Meir

Stopped for lunch in Neve Shalom.