I decided this time I’d try something different for transportation, and bring the bicycle and ride the bike from the finish back to the car at the start. So I found a place to leave the bike at Ben Shemen forest and then drove to El’ad and parked the car.

The most interesting thing on the trail was right at the very beginning: the Mazor mausoleum.  The mausoleum is Roman, 3rd century.  It’s the only Roman era ruin in Israel still standing from foundation to roof.  Who it was created for is unknown.

After the mausoleum the trail parallels highway 6 most of the rest of the way to Ben Shemen, crossing the highway twice.  There’s a little variety, but not a lot.  Some of it was spent walking through forest, much through exposed areas, including agricultural areas. It goes through an industrial park with a large Teva factory. Towards the end the trail goes through Tel Hadid, which is a 2,800 year old farmhouse, but there wasn’t a lot left to see.

At the end, at the Ben Shemen Forest parking lot, there was a cart selling coffee.  I enjoyed a cafe hafuch before hopping on the bike to ride the ten miles back to where I left the car at El’Ad.

Started hiking next to highway 444

This tunnel is the way the trail crosses Highway 6

The light at the end of the tunnel?

Motorcycle riders — first time I’ve encountered that on the trail.

No day on the trail is complete without a sheep sighting.

Highway 6. I’ll be glad when I get away from the highways again.

Was pleased that I could get a latte at the finish.

At the end of the trail for today at Ben Shemen Forest, near highways 443 and 6. Now…

In Praise of Jerusalem

Women of the Wall, Fighting for the Torah 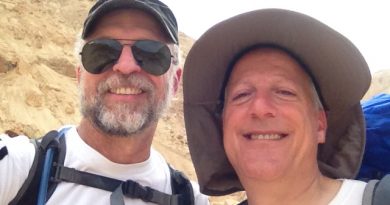