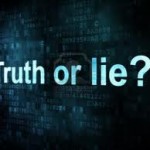 The German philosopher said that it is always wrong to lie — even to a murderer at the door looking for a victim.  As described in an essay by Tim Mazur:

The philosopher Immanuel Kant said that lying was always morally wrong. He argued that all persons are born with an “intrinsic worth” that he called human dignity. This dignity derives from the fact that humans are uniquely rational agents, capable of freely making their own decisions, setting their own goals, and guiding their conduct by reason. To be human, said Kant, is to have the rational power of free choice; to be ethical, he continued, is to respect that power in oneself and others.

The Torah in general is in favor of telling the truth — “do not bear false witness” is one of the ten commandments.  The rabbis in the Talmud interpreted not bearing false in a way similar to the famous oath for jurors — to tell the truth, the whole truth, and nothing but the truth.  They took it even further than telling the truth: they forbid even standing next to someone if it would make it appear you agreed with what he was saying if in fact you did not. There are many other prohibitions in the Torah against deceitful behavior, such as having dishonest weights or measures.

But Judaism’s prohibition on lying is not as iron-clad as one might assume from the preceding discussion. In this week’s Torah portion, Vayera, God himself fudges the truth.  When told that she was going to get pregnant, Sarah laughs and says “After I am grown old shall I have pleasure, my lord being old also?”  But when God asks Abraham why did Sarah laugh, he leaves out the part about “my lord being old also.”  God himself obscured the truth.

The rabbis understand from this that the prohibition against lying is not absolute: that it’s OK to bend the truth for purposes of “shalom bayit,” peace in the home.

That, of course, is a “slippery slope” — it becomes easy for people to make excuses to themselves, that they are lying for the sake of “shalom bayit,” when in fact they are lying because it affords them some benefit.

But despite the slippery slope problem, we understand that certain “lies” are OK — if someone asks “how are you?” they don’t necessarily really want to know, and telling them “fine” — even when you feel your life is dissolving around you — is considered acceptable.

This is one of the things I like about Judaism — we don’t generally posit “moral absolutes.”  We understand that life and the world are not completely black and white.  That rules have exceptions.

The challenge is make the moral decisions even when navigating the gray areas.  To weigh the competing values and do the “right” thing, not the self-serving thing, even when you could come up with excuses.