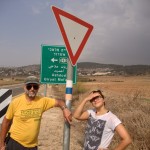 Day 26 on the trail started with a ride on the motorcycle to Ein Kerem; I parked the bike right under an Israel Trail marker in the center of town, just where I left off last time.  The trail goes through Ein Kerem and joins with a trail that goes around Hadassah Ein Kerem Hospital, the most advanced hospital in not only Israel, but in the entire Middle East.  My youngest daughter was born there, and when we need an emergency room it’s generally where we go, so it’s a familiar landmark.

The trail then goes past the moshav of Even Sapir, founded in 1950 by immigrants from Kurdistan. From Even Sapir the trail climbs 900 feet to Yad Kennedy, the Kennedy Memorial, dedicated on the 4th of July, 1966, with US Supreme Court Justice Earl Warren in attendance.  Kennedy visited Israel twice, in 1939 and 1951.  On his second visit he said “”Perhaps the greatest change of all I found in the hearts and minds of the people, For unlike the discouraged settlers of 1939 they looked to the future with hope. I found a revival of an ancient spirit.”  The “official” trail doesn’t actually go all the way to the monument, but I decided to make the brief detour.  I frequently ride my mountain bike up to the monument, so I wanted to go past it on my Israel Trail hike as well.

From Yad Kennedy the trail descends 1,000 feet through a wooded area to Nahal Refaim where it crosses under the Beit Shemesh – Jerusalem train tracks.  Leaving Nahal Refaim the trail makes a fairly steep 600’ climb to Ein Kobi, the ruins of a 2,000 year old settlement in the Judean hills. From Ein Kobi the trail goes along some relatively flat agricultural roads for a few miles before reaching highway 386 between Tsur Hadassah and Bar Giyora.  386 goes right to Ein Kerem, so I decided I’d try hitching a ride.  It took much longer than usual to get a ride, I was waiting well over half an hour before someone finally stopped; conveniently he gave me a ride all the way back to where I was parked.  Today’s outing took about 4 hours.

My daughter Katherine accompanied me on Day 27.  We rode the motorcycle to where I left off the week before near Bar Giyora.  With only 125cc and two people the bike was struggling up some of the hills and it took a while, but it was a pretty ride.  Today’s run was almost all downhill – we descended from an altitude of 2,392’ at the start to 738’ at the finish.  About a mile and a half in the trail goes by the tomb of Sheik Ahmad El-Hubani’s tomb.  I couldn’t find any information on this sheikh other than its name.

Not too far from the tomb the trail goes by the ruins of Horvat Durban.  An article in Eretz magazine describes it

Horvat Darban acquired its name when a porcupine (darban in Hebrew), digging itself a burrow in the southern slope of the ruins, exposed a potsherd bearing an imprint stating “for the king.” It dated from the time of King Hezekiah (705-701 BCE). Archaeologist Yohanan Aharoni subsequently dug at the site and found pottery from the Persian period (538-332 BCE).

Another mile or so on and the trail goes by moshav Mata, which looks like it would be a very cool place to live, very much out in the country, but not too far from civilization. Leaving Mata, the trail goes through a date grove at the bottom of wadi, which looked like it would be a nice place for a break, except we weren’t ready for a break yet.  The date palms are at a spring, Ein Mata, where there are some more ruins Horvat Tanor, estimated to date from the Crusader period.  I’m sure the “Home Sweet Home” graffiti is a more recent addition!

Next we had a short but steep climb to some more ruins, Horvat Hanot, which was an ancient caravansary.  There are some Byzantine era mosaics in one of the ruins, covered by sand for protection, which you need to sweep out of the way if you want to see the mosaic.

From there the trail goes down what is labeled “Ceasar’s Road.”  The road Hadrian built in 130 to help bring troops in to crush the Bar Kochba revolt certainly was in this area, but the steps on the trail most likely were NOT part of the Roman road.  Romans didn’t build steps on their roads – the steps were probably from a later period, and designed to serve pilgrims, not soldiers.  But it was still scenic and interesting.  After crossing highway 375 Katherine and I stopped for a break at the site of an ancient olive press where there were some picnic tables where we could sit. After crossing the highway again we had a brief stretch in the woods before coming out into an open area behind Kibbutz Netiv HaLamed Heh, named in honor of 35 Haganah soldiers killed when their convoy, attempting to resupply Gush Etzion, was attacked in the War of Independence.  From the kibbutz it was another easy three miles until we reached highway 38, where my wife and another daughter picked us up and brought us back to Bar Giyora where we had brunch at Bar Behar, a nice café with a great view. Was a little over four hours on the trail, mostly jogging at an easy pace.

On day 28 my wife drove me back to where we left off on highway 38 across from Tel Azeka.  She drove around to the tel (which she tells me was surprisingly hard to find and poorly marked) while I ran up a short, but very steep, section of the trail to get to the top.  Azekah is an ancient site, first mentioned in the Bible in the book of Joshua, where it says he defeated the Amorite kings.  Its most famous mention is in the context of the fight between Saul and the Philistines, when David killed Goliath with a slingshot.  Azeka would have been where Saul and company prepared to battle the Philistines coming from their home in Gaza.  The trail to the top of the Tel from the parking lot (not steep, and pretty short) has inscriptions from the Bible along the trail, quotes from that battle or the preparations.  Azekah is also mentioned in a couple of sources outside the Bible – the Assyrian king Sennacherib described the town’s destruction, along with neighboring Lachish, in his recounting of his military campaign against Judea in 701 BCE.  There’s something very powerful about being at a place that is mentioned in the Bible, corroborated in other sources, that is 2,700+ years old.  Somehow makes the stories in the Bible more tangible and real.  Saul of course would have been over 300 years before the battle between Hezekiah and Sennacherib, but the geography certainly fits the story.

From the top of the view there’s an excellent view of Emek HaEla, the valley I was running next to all day on the previous day on the trail, noted for vineyards and a satellite station.  On a clear day you can easily see Gaza and the Mediterranean; today was too hazy.

Today’s run was much more strenuous than I thought it would be.  Even though it starts and finishes at more or less or the same elevation, it climbs to the top of a ridge that parallels highway 38, and goes up and down with the hills along the ridge – so in the 11 miles, there were over 2,000 feet of climbing and 2,000 feet of descending – mostly not steep, but still a lot of up and down.

Leaving Azeka the trail goes through a forest with scattered ruins and picnic areas.  It joins a marked trail called “trail of the wells and cisterns,” and there are numerous examples of both along the trail.  By the junction with route 353 there was an unusual play structure/sculpture including a couple of life-size and life-like sheep.  A group of motorcyclists were sitting at the tables in the shade.

About 3.5 miles in the trail passes by Kibbutz Srigim (also called Li On).  Too bad it was early in the day to stop for a beer – they have a microbrewery on the kibbutz, which was founded in 1960.

A little further on the trail comes to the Masua Observation Point.  Masua means torch the name of the site comes from a letter that was found at Lachish that read “We watch for the torches (masu’ot) of Lachish according to all the signs provided by our master, for we cannot see Azaqa.”  There is an architecturally interesting tower with stained glass at the site, along with some picnic tables.  I stopped to admire the view and take a break.

Leaving Masua the trail becomes more exposed.  About 6.5 miles in it passes some more ruins, Khirbet Tzura.  Couldn’t find any information on these ruins, other than it may have been a farm.  Another mile down the trail it comes to Tel Goded, where there was an IDF group that looked like they were on a camping trip.  Tel Goded is identified with the biblical Moreshet-Gat, home of the prophet Micah.  There are a lot of Bar Kochba era caves in the area but I didn’t come across any – they were probably over near where the soldiers were camping.  Leaving Tel Goded, the trail drops sharply down to highway 38, and follows the highway for a while, looping behind Kibbutz Beit Guvrin, founded in 1949 by former members of the Palmach.  I stopped for the day at the gas station next to Roman amphitheater and across the road from the entrance to the national park, a fascinating place we’ve visited several times.  Lauri was waiting at the café there, where we had lunch before heading home.

Rode the scooter to Ein Kerem and hitched a ride back

The Kennedy Monument, built in 1966. I frequently ride my bike up here. It was a sli…

I did see a fox today

Seemed like a pretty random place to have a swing set

That’s Yad Kennedy on the mountain in the distance. I ran to tthe top from the other…

At the start of day 27 on the Israel Trail, near Bar Giyora. Simon Bar Giyora was on…

Horvat Darban acquired its name when a porcupine (darban in Hebrew), digging itself a…

The trail goes right by an entrance to the moshav

There’s a beautiful mosaic there which is covered with sand for protection. If you w…

The sign says this is "Ceasar’s Road," and the explanation says it was buil…

Whoever installed the, the steps are very old.

remains of an ancient cistern

Not sure why the Romans left columns strewn about the countryside

A reconstructed olive press, right next to 375.

We took a break next to the olive press

The Ela Valley is becoming known for wine.

Kibbutz Netiv Halamed Heh, named after 35 Palmach soldiers killed during the War of I…

Across the road from Tel Azekah

Post trail brunch at Bar Behar next to Bar Giyora

Tel Azekah, site where Saul, David, & co. may have camped before fighting Goliath…