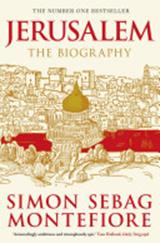 Anyone who lives in Jerusalem – or who is fascinated by this fascinating city I get to call home – would be well-advised to read this book by Simon Sebag Montefiore.

The book is, as the title suggests, a biography of Jerusalem – told through the stories of many of the fascinating characters who have either ruled over the city, lived in the city, or in some way had a major influence on the city over the last 3,000 years, starting with King David.

Besides all the great historical figures you would expect to find in a book about Jerusalem – King David, Herod, Jesus, Hadrian, Justinian, Saladin, Baldwin, Suleiman, Allenby, Ben Gurion, etc., — there are many less well-known figures who are fascinating in their own right. Lots of great tidbits about the city, lots of great quotes. For what must be one of the most religious cities in the world, the elite in Jerusalem has apparently generally had a complex and lively sex life, many details of which are also shared. A few tidbits I enjoyed:

I have many more passages I highlighted, but that gives a good sample. The book is well-written, meticulously researched, and definitely a fun read. And of course living here, we keep adding on to the legend that is the city at the center of the world.