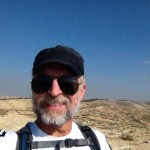 I find when doing a day on the trail – especially a long day, as this one would be with a bike ride back at the end – I’m often too tired to get any work done when I get home, so I decided I’d get up early, put in a couple of hours on the computer, and then head out.  Once I was ready to go, I was faced the question of what route to take to get Meitar.  The most direct route – and according to Waze about half an hour faster – was to take Highway 60 all the way through the West Bank.  Some Israelis don’t like to take “shortcuts” through Palestinian territory because they feel it’s somehow symbolic of the “Occupation,” or using someone else’s land somehow.  Some Israelis don’t like taking shortcuts through Palestinian territory because they are worried about security.  We read about incidents of stone-throwing – and worse – on a fairly regular basis.

I decided to go ahead and take the direct route. As much as I’m opposed to the occupation and would love to see the Palestinians have their own state, me inconveniencing myself isn’t going to bring them any closer to a state.  The security situation has been reasonably quiet lately, I’d be traveling in broad daylight and all in areas solidly under Israeli security control.  Still, I have to admit it felt somewhat “adventurous” deciding to take that route instead of going around and staying in Israeli territory.

There would have been a faster way, but I missed a turn, so as a result had some extra driving to get my bike to the point where I planned to finish, at the Forester’s House in Yatir Forest.  The road driving up there, 316 going north from 31, is definitely the most poorly maintained road big enough to have a number that I’ve driven on in Israel.  There were potholes that I was sure were going screw up the alignment on my car. By the time I got the bike stashed and got back to Meitar it was nearly 11am.  I was definitely getting a much later start than I would have preferred.

I parked at the north side of Meitar, near some new construction, and within a kilometer or so spotted my first marker: I was back on the trail. Once clear of the immediate vicinity of the moshav, the trail enters Meitar Forest.  Most of today would be spent in either the Meitar Forest or the Yatir Forest.  About a mile in at the top of a hill is an old guard station.  This was very close to the border with Jordan from ’48 to ’67.

The trail leaves the forest and goes through some fairly barren terrain for about three miles.  I told myself “get used to it.”  The Negev is going to be a couple of hundred miles of barren terrain.

About five miles in I came to the top of Mt. Hiran, which had an amazing view.  In fact someone had scrawled some Hebrew graffiti on the rock where the marker for the hill is: איזה נוף!  (What a view!).  And it was indeed quite a 360 degree view.

Next landmark was a microwave radio tower near the edge of a forest.  It looked like it would have been a perfect spot for one of the RF Repeaters a company I co-founded in 1983 made (Peninsula Engineering Group).  The tower was halfway to my destination, so I decided to break for “lunch,” which consisted of a granola bar, raisins, and nuts.

I was now running along the edge of Yatir Forest.  Yatir Forest is a fascinating place: who would have thought you could successfully plant a forest at the edge of the desert?  It is, in fact, the largest planted forest in Israel, covering 30 square kilometers, home to four million trees, as well as a few vineyards and a reservoir. The forest is also home to a few different ecological and environmental studies; those interested can check out the Yatir Forest Research Group.

Not far from the tower I came across the only other people I saw all day: a Bedouin family collecting firewood, putting it into a trailer they were towing behind their big black SUV. I was struck by the juxtaposition: collecting firewood is one of those things that poor people do to get by, and have been doing as long as there have been people.  Yet here there were doing it in a very “capital-intensive” way with a trailer and an SUV.

From the ruins the trail climbs for another mile or so through the forest before reaching the Forester’s House, which is sort of a center for Israeli forest rangers. I took another break at a picnic table there, and then hopped on my bike for ten mile ride back to Meitar.  There is an access road that parallels the trail, and it was net downhill, so the ride back wasn’t too bad.  I did make it to the car well before dark.

Since I drove highway 60 last week, I wasn’t too worried about driving it this week.  I also decided to get an earlier start because this was going to be a longer day – 12.6 miles, over 20km, and with a big hill – a big hill I’d have to ride my bike up after running 20km.

I drove straight to my destination, Tel Arad.  They let me lock my bike up inside the building.  From Tel Arad the drive to Yatir was a preview of what I would be doing some hours later on the bicycle: the trail looked kind of rough, so I decided I’d ride the bike back on the road.  Seemed far enough in the middle of nowhere I didn’t expect much traffic.

I was back at Yatir and ready to get on the trail reasonably early, a little after 9.  The trail starts out on dirt roads going through the forest.  Before long the view opens up and there are some vineyards, source of the grapes for the Yatir Winery, considered one of the better small wineries in Israel.

It was a pleasant steady but not too steep uphill in the forest for about five miles to Kibbutz Har Amasa.  The path makes a right turn, and continues climbing along an ancient Roman road, that had been part of the road connecting Jerusalem with the Negev.  Pretty cool to be running along a road that carried Roman soldiers once upon a time.  Another mile brought me to the top of Mt Amasa, halfway to Tel Arad with some great views, and a good place to take a break.

From the top of Mt Amasa I could see an incredible expanse of desert … and I had a feeling of “here we go,” as desert was going to be my hiking/running home for another few hundred miles before I get to Eilat.  Good think I like deserts.  We’ll see how I feel about them when I get to Eilat.

The trail continued on the Roman road for a while, and started heading downhill.  Not too steep, but the road was very rocky, so progress wasn’t as fast as it would have been on a better road.  About a mile along I came across a couple of Bedouin kids herding sheep, with a handsome white donkey.

About 8 miles in the trail goes quite close to a very large and very noisy quarry. I had to wonder with all the desert around they had to choose a route that goes right by the quarry?  Was not the most scenic thing.

Just past the quarry there was an ancient well with a Byzantine-style rosette.  About a mile past the quarry the trail reaches the Bedouin village of Drejat.  The trail skirts the edge of the village, doesn’t really go into.  It also goes through a dump, which also was not so pleasant.  From here it was a relatively flat three miles to the archaeological site of Tel Arad.  Enroute I passed right through the middle of a Bedouin encampment, where there were a few dogs that didn’t like my presence.  I had to bend over a grab a rock and threaten to throw it to get them to leave me alone.  The encampment was permanent enough to have a solar power installation!  I got to Tel Arad around 1 and took another break before getting on my bike.

The bike ride was fun. Traffic on highway 80 was very light, about one car every 3 to 4 minutes. The only hard part was the climb to Har Amasa: 784 feet, 2.8 miles, 5.2% grade.  Kicked my butt.  But from the top it was mostly downhill, and on a lovely, deserted, paved road through the forest.  Very pleasant to ride on.

I stopped at another ruin, Hurvat Anim.  I stopped and said the afternoon prayers in the ruins of a synagogue that was in use for 1,200 years – from the 4th century BCE to the 8th century CE. An easy ride from there back to the car.

It says "What a view!" And it was indeed an impressive view.

The Forester’s House in Yatir. http://www.kkl.org.il/eng/tourism-and-recreation/fores…

After running 9.5 miles to get here, I had to ride my bike back. Fortunately there w…

This must be a pretty damp spot if they planted eucalypus.

Har Amasha, A kibbutz in the proverbial middle of nowhere.

Remains of an ancient Roman road that ran from Jerusalem and Hebron to the Negev.

At the top of Mt. Amasha. Welcome to the desert.

The kid watching the sheep offered me a donkey ride…I turned it down.

The agricultural fields are getting green.

Not so nice that near the Bedouin town of Drejat the trail follows a garbage dump.

I had to make threatening gestures with a rock to the dog to backdown.

Even the Bedouin have solar power now!

The bike ride back to the car was reasonably pleasant — not too many cars. But one h…

The road goes more or less straight up the hill.

Remains of an ancient synagogue that was in use from 400 BCE to 800 CE. I stopped and…

I Shall Not Hate