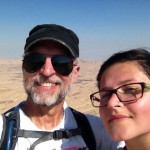 Day 36, February 17, 2014
For these two days I had a special treat: My daughter Katherine came with me. By now, I’m feeling like a regular commuter on Highway 60 through the West Bank. We got a reasonably early start, and were at Be’er Efe ready to get on the trail by about 9.  Day 37, through the Makhtesh Hakatan, was one of the best days on the trail so far.

Logistics in the desert are definitely more complicated than up north.  In general I don’t think it’s a good idea to leave your car in the middle of nowhere in the Negev – too high a chance it will get stolen or broken into.  But in this case, the trail started right at a junction where trucks were continually coming and going from the quarry, so I figured there was enough traffic it would probably be safe.  Whether my logic was correct or not, I don’t know, but the car was fine.

Today’s run was mostly a fairly steady gentle uphill.  Net elevation gain of almost 1000 feet, but 1800 feet of climbing with the ups and downs.  The trail went along a dirt road for a couple of miles near the start, which made for easy running.  About 4 miles in we saw a group of hikers, and a little later we saw a second group.  Compared with how few people I’ve seen on the trail lately, it felt like “Grand Central Station.” There was also a helicopter doing some very low flying in the area. A little further on, at 4.5 miles, the trail went up a short but steep trail to get to the top.

From the top of that hill there was a long (4.5 miles) relatively boring stretch along a dirt road on the top of the plateau.  Not much to see.  VERY barren.  The thought crossed my mind that I should have put together a playlist with “moon” themed songs…”Walking on the Moon,” “They Put a Man on the Moon,” etc.  At 9.5 miles in though,near the Zafit Industrial Zone, there was finally something that broke up the monotony: an enormous conveyor belt that stretches over 18km to carry potash from the Dead Sea to the railhead.  You can read about it and see some more pictures here. It was in operation when we ran by, making a fair amount of noise even though it wasn’t actually carrying anything.  If it wasn’t running it would be a good spot for a break in the shade it provides.  In operation though, not so much.

From the conveyor belt it was only another mile and a half to where we finished on Highway 25, a major road between Tel Aviv and Eilat.  We looked around the Roman-era ruins of Meizad Tamar at the finish before heading back to the car.

We tried to catch a ride on Highway 25, but no luck, so we ended up jogging an additional 2.5 miles to the junction with road 258, which is the road where the car was.  258 is a very small road without much traffic.  But I have found you get picked up MUCH faster on those small roads.  Interesting the psychology of that.  In any event, we got a ride within five minutes, from a Russian guy who works in the industrial park at Zafit.  He VERY kindly gave us a ride all the way to our car, which took him about 10 miles (round trip) out of his way.

We drove on to Dimona, passing Israel’s nuclear reactor in the distance, which is officially for “research” purposes.  If Israel does have the 100 or so atomic bombs it is rumored to have, the fissionable material came from the reactor we saw from the road.  A HUGE swath of desert near Dimona is fenced and monitored as a closed military area.  We checked into our hotel the Hadass Desert Inn.  Nice place, recommended. We had dinner at Miznon, a vegan restaurant run by the Black Hebrews community. The Black Hebrews are a fascinating group – they are African-Americans who claim to be descended from the ancient Israelites.  Their leader is something of a cult figure, and they practice polygamy among other things.  They have been accepted by the Israeli government and have received permanent resident status, and some are getting citizenship and serving in the IDF.  Even the kids who were born here though speak English with heavy American accents.  Was funny sitting there listening to people talking about Rihanna and football.

I organized a cab driver to drive us to the start and pick us up at the finish.  Even though the start was on a busier road than yesterday’s run, I didn’t feel comfortable leaving my car there.

Our driver, Uzi, was sort of a “Jewish trail mother.”  He wanted to make sure we had enough water – 5 or 6 liters apiece.  And he suggested picking us up at 7am, “it’s a long hike.”  But he was great.  We now know all about his family, his daughter, the dental tech in the IDF and his son the locksmith in Chicago.  Saw pictures of the lot on Facebook…gotta love this country.

So he did pick us up around 7, and by 730 we were actually out on the trail.  Today’s outing was 23km, 14 miles, with a lot of up and down; 3,400 feet of climbing and 3,200 feet descending.  But it was tougher than that sounds, because there were also LONG stretches of flat – the hilly parts were quite steep, and on Maale Eli, it seemed almost straight up.

The trail starts out with a quick climb to the top of a hill, which was completely barren with beautiful views. From there it descended on a moderate grade for about two miles down into Ein Zafit (“Ein” means spring).  We took a short detour up the canyon.  It was quite scenic and there were some pools with water in them. On a hot day would be a great place for a cooling dip if the springs were still flowing.

Coming out of the canyon there was a short steep part and then a steady climb through more barren terrain for about three miles (I have the feeling the word “barren” is going to be getting a workout on the section of the trail from here to Eilat), at which point it arrives at an incredible view point: the edge of the small crater, Makhtesh Hakatan. It really is an incredible geological formation.  We stopped at the edge of the crater to admire the view and take a rest.  There were two guys nearby with tallis and tefillin, saying their morning prayers…they had clearly camped for the night right there at the edge of the cliff.  Seems like a bit of a windy spot.  We finished our snack break and were back on our way before they finished.  One of them was doing the whole trail, had been on it for over a month.  His friend was just along for that day’s expedition.

From the edge of the crater it was a fairly steep and rugged descent for about two miles, and then it flattened out some.  We decided to take a detour to go out to “Satan’s Mouth,” a natural exit from the crater at its low point, 187 feet below sea level (the rim is at 1500 to 1700 feet).  There were some interesting rock formations at the exit.  You could also see some branches stuck about 20 feet up in the air on some power lines – an indicator of how high the water gets during a flood.  Would not want to be caught there at such a time! The Israeli water authority has some wells there, which makes sense – the bottom of the crater would be closer to the water table.

From Satan’s Mouth – which is at about 8 miles in – it’s a steady 3.5 miles gentle climbing up a wadi until reaching Ma’ale Eli. The scenery gets very impressive as you get close to Ma’ale Eli – sheer cliff walls looming over 1,000 feet above the edge of the bowl.  I kept stopping to take pictures – I couldn’t believe how vertical the trail was, it looked like it went straight up the cliff, and it practically did. It climbs 1,000 feet in 7/10ths of a mile. There were several places where there were handrails, and a few where there were large “staples” pounded into the rock to give you something to grip as you hauled yourself up, with a drop of a few hundred feet on either side. I would not have wanted to have been doing that with a full backup, it was challenge enough with a day pack.  When we finally hauled ourselves to the top we were rewarded with a magnificent view across the crater to Satan’s Mouth.

There’s no cell phone reception down in the crater; now that we were up on top, there was, so we called Uzi and arranged to have him come get us. He would pick us up at the highway, which was another mile and a half of flat hiking away. There’s an army base right there at the edge of the crater, but we didn’t see a lot of activity.

Uzi actually drove his cab down the dirt road to pick us up, but I made him wait while I jogged the few hundred meters out to road. I wanted to start the next segment on the road, and I have been VERY strict about making sure I am covering every single step between Lebanon and Egypt…no skipping anything, not even a few hundred yards.

It took us a little over 7 hours for today’s hike.  Uzi was impressed – it’s the fastest he’s seen anyone make it, and I’m not a “kid.” Despite the fast time, we didn’t feel rushed.  We enjoyed the scenery and took a few breaks.  The difference in time is because we did run in most of the easier sections.

Today’s hike was definitely one I would repeat.

I find it pretty cool to know that in the last year I’ve covered over 450 miles on the Israel Trail.  It’s been an awesome hobby.

Saw more hikers in the last two days than I had seen for many sections on the trail.

This helicopter kept buzzing us.

Dinner at Miznon, a vegan restaurant run by the Black Hebrews in Dimona

At the top of the Makhtesh HaKatan (small crater). Not an impact crater, a crater-li…

Note how high up you can see branches: water got that high during a flood.

These seem to be water wells at the bottom of the crater.

A Visit to Rachel’s Tomb