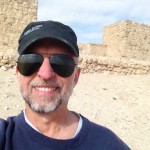 Well, by now I feel quite comfortable with “commuting” on highway 60 through the West Bank to get to the area around Arad.  I guess it’s all just a matter of familiarity. I got a reasonably early start, as I wanted to spend some time exploring Tel Arad before getting out on the trail.  It was definitely worth seeing.  The site was first settled 6000 years ago.  Most of the ruins are from the first and second temple periods.  It includes the only Judean temple discovered to date.

Today’s run was pretty easy.  Not too far, not too vertical, relatively easy terrain. Only took me about 3 hours.  It was a relatively boring section. Definitely NOT one that I would repeat for the scenery.  It was mostly flat and agricultural until nearing Arad, when the trail climbed a wadi and got a little bit more scenic, but still not anything special.  I continued through the town out to the old landing strip where I planned to start the next day.  It was nice going through town and stopping for coffee.

I had a cab pick me up at the landing field. Was about NIS 80 to get me back to my car at Tel Arad.  I stayed in a B&B, “Hannah’s” which was perfectly acceptable.  Reasonably priced, NIS 250, had internet, etc.  The desert is definitely cheaper than the Galilee.

Arad is a pretty sleepy little town.  Large population of Russians.  I was amused that they have a Restaurant Putin in town.

Today was my first real desert day.  I decided to follow the advice in the Jacob Saar book about taking a shortcut that trimmed 9km and one hill from the trail.  It was going to be over 10 miles already to get to the next place where I could get off the trail.  It didn’t look like the landing field would be a secure place to leave the car, so I left the car at the B&B and took a taxi to the start.  Got a reasonably early start, was out on the trail by shortly after 8.

The landing strip is covered with old tires – obviously no planes can land there anymore.  Seems a pity that it wouldn’t be in use, I don’t think there are any other airports near Arad.  The section near the landing field was fairly heavily travelled by cars heading to a Bedouin camp; the trail followed a dirt road.

After about a mile the trail rejoined the official Israel Trail, and continued for about another mile along the top of a plateau before reach the edge of a wadi where it started a long descent.  The rest of the day was pretty much all downhill, a descent of about 1,500 feet (500m) but the terrain became much more rugged so my pace was often held back by the terrain.

The trail went down the bottom of the wadi, Nahal Kanfan – and I was reminded of the need to be vigilant about the weather in the desert in the winter.  These places would see flash floods in the winter.  While I was making my down along the bottom of the wadi there were a few Bedouin with their flocks of sheep and sheep dogs on the ridges above me.

I mostly like to run with music on the trail; when I got away from civilization I took my earphones out to appreciate the “silence of the desert,” but it wasn’t that silent.  I could hear planes and helicopters in the distance; birds around the few trees; and one of the shepherds was either singing or yelling at his sheep, I couldn’t quite tell.  If it was singing, I was picturing Randy from American Idol saying, “it didn’t do it for me, man, was kind of screechy.”

In the bottom of the wadi the scenery got quite interesting – large smooth boulders shaped by erosion.  After coming out of the area of the large boulders it was pretty easy going along the wadi.  About 7 miles in, near the intersection with Nahal Hemar, I saw a camel standing by itself, seemingly unattended.  I moved closer for a look, and could see the camel was tied to a bush, so I assumed the owner must be nearby.  I was relieved.  I had been thinking about the obligation to return a lost animal to its owner, and was wondering what the hell I was going to do with a camel until its owner came to collect it.

The trail continued in the wadi; at about 9 miles in it came into the area of a large quarry.  There was one spot with holes for explosives in a cliff and a warning sign to stay well back from the cliff due to falling rock. The last mile or so was on a dirt road with large trucks carrying rocks zipping by.

One thing I’ve noticed is that if you try and hitch a ride you get picked up MUCH faster when you are in the middle of nowhere than when you are on a busy highway.  I was only there about 5 minutes before I got a ride all the back to Arad.

A former landing strip just outside of Arad

For a small country, Israel sure has a lot of empty space.

The trail was quite rugged going down the wadi

I saw this unattended camel, and wondered if I should try and fulfill the commandment…

Today’s run finished about midway between Arad and Dimona. Also known as "the m…

A Visit to Sderot

Devarim 5767 – go up and possess the land; but what about the inhabitants?