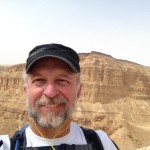 Didn’t get the earliest start today, but it didn’t really matter as I was only doing about 12 miles. Given the distance – an hour and a half drive now – this is probably the last one I’ll do as a “day trip.”  Lauri was my driver for the day – which I really appreciate, as the logistics in the desert are much more complicated than they were further north.  We got back to where I left off on the trail a little before 10am, and I hit the trail while Lauri drove back to Dimona to find a café where she could sit and work while I did the segment.

On the initial climb away from the road you get a good view of the nuclear power plant at Dimona, “officially” for research purposes, but common knowledge it’s where Israel produced the fissile material for the nuclear weapons it has never acknowledged having. I think I may not have been supposed to take a picture of it, but you can find others on the internet, and you can see it from the road, so it’s not like it’s much of a secret.

After about an hour of easy jogging, about 4 miles in, I reached Meizad Zafir, a Roman-era fort.  I found myself wondering who a Roman soldier had to piss off to get assigned to such a remote and inhospitable place.  The absolute middle of nowhere, no water, barely any plants or wildlife.  Very harsh duty indeed.  Hope they got some kind of “hardship pay.”

Leaving Zafir, it was pretty easy going for another few miles, a gradual descent along the side of a canyon with a steeper descent reaching Nahal HaTira.  Along the way I had one of those “gee, it really is a small country” moments.  I saw a hiker coming up the other way with full backpack, and when we said “Shalom” to each other it was obvious we both had heavy American accents, so we switched to English and started chatting.  Turns out that it was someone that I didn’t know, but with whom I had lots of friends in common.  Definitely a big overlap in our social circles.  Running into someone like that out in the absolute middle of nowhere is one of those experiences that just seems to happen a lot more in Israel than in anywhere else I’ve lived.

Nahal HaTira pleasant wadi, green, some flowers.  Being winter, this was about as green as the desert was going to get. A little further on I passed a group of hikers from Finland.  Took my lunch break under a very nice big tree, one of the most comfortable rest stops I’ve had in the desert so far.  At about 7.5 miles in I got to Ma’aleh Palmach, the Palmach Ascent.  Apparently the Bedouin felt that this section of the cliff was impassable, but back in the 40s the Palmach decided they wanted a route out of that canyon, and they blasted a path.  It’s passable now, but very steep, very rugged, and there a section where there’s a metal ladder pounded into the side of the cliff to take you straight up.  Very dramatic, and some great views.  Just don’t look down if you’re afraid of heights – which is something that’s true for several of the sections of the hike in the Negev.

I sat and caught my breath and took a short break and admired the view at the top of Ma’aleh Palmach.  From there the trail went past Ein Yorke’am, but I didn’t even bother going to the spring – there were busloads of kids on a tiyul, and the guidebook said you wouldn’t want to get in that water anyway. Shortly past the spring the trail came out on road 206.

There was an additional 3 mile segment that went across the road and then back down to the road, so I decided I’d go ahead and do that today, so that for next time I would be as far along as possible.  However, I hadn’t really read the guidebook about the next section, so I got rather a big surprise.  After going through a tunnel under some train tracks running to the phosphate plant at Oron, the trail went up “Snapir Hagadol,” “The Big Fin” which is a pretty accurate description.  It was like a giant shark’s fin.  Straight up.  Very rugged.  And I was NOT at all psychologically prepared for it. A climb of 400’ in 4/10 of a mile.  At the top there was group after group of school kids.  I’ve NEVER seen so many.  I bet altogether there were a thousand kids out there.  It was like Grand Central Station in the desert.  They weren’t all on my section of the trail – some were off to the side, some were in other areas, but there were several on the trail that I had to navigate my way around.  After a couple of miles the trail came back down the hill and finished near the Oron plant.  Was about 3:20 in the afternoon when I got back to road where Lauri was waiting to give me a ride home.

The trail scrambles right up the rocks.

i heard a loud explosion and saw this cloud; looks like it was from the direction of …

The only green in the desert is down in the wadis.

A little hard to see, but this crack in the rocks was VERY deep.

Wadi Hatira ahead; going down Ma’aleh Yemin (Yemin Ascent), although if you’re doing …

Small country syndrome: hiking in the middle of nowhere and encounter a hiker going t…

There were a bunch of Finnish tourists hiking the trail. One of them

Ma’aleh Palmach. The Palmach blasted a path up. It goes more or less straight up.

When I said “straight up” I wasn’t kidding.

One of the scariest sections of Ma’aleh Palmach: very narrow, hundreds of meters drop…

The area and Ein Yorkeam is very popular for school field trips.

This feature is called הסנפיר הגדול, the big fin, for obvious reasons. Another one of…

Another 20km closer to Eilat.

A not so happy Hanukah