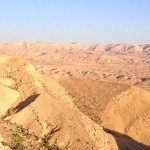 This day was not only the most difficult day I’ve had on the trail, it was the most physically demanding thing I’ve done since I climbed Mt Whitney in one day 15 years ago.

I had debated for quite a while how I was going to do this section.  The first 12 miles is, according to the guidebook, the most difficult section of the Israel Trail, the “Karbolet,” which means “cox comb.”  Very steep and very rugged.  The guidebook cautions hikers to start very early in the day so they can be sure to be down at the Mador night camp before dark.  So here was my dilemma: I really prefer just doing this with a day pack, not the full backpack and camping out.  But to do that I’d either have to hire a jeep to come pick me up at the camp, or do another 9 miles to Sde Boker.  I thought about it a long time, but eventually decided I’d just do the whole thing.  I’m in good shape, I jog when the terrain is cooperative, I can generally make it in about half the time the people with full backpacks take.  I figured if I started at first light, at 6am, I’d have 13 hours of sunlight available, and I should certainly be able to finish 22 miles or so within that time – especially since the last 9 miles are pretty flat.  All I had to do was beat the backpacker times by 3 or 4 hours and I’d have plenty of time to finish the trail.

And it did work out that way. In order to get such an early start we (Lauri was my driver again, and one of our kids came along for the ride) stayed in Dimona the night before, at Hadass Desert Inn, where I stayed before.  We were up at 5 and I was actually out on the trail and on my way at 6am.

I was starting from where Lauri picked me up the time before, and was following a GPS trail someone else made, which didn’t actually re-join the “official” Israel Trail for about 2 miles on a route around the phosphate plant.  I had read the plant was very noisy, so I was glad that it wasn’t in operation this day – probably closed for the Passover holiday already.  When I got to the intersection with the Israel Trail, I initially went the wrong direction on the trail, and added half a mile to what was already going to be the longest day on the trail.  I felt pretty stupid about that.  Even with GPS you can get turned around or “outsmart yourself” sometimes.  Once I got back going in the right direction, I started the climb up to the Karbolet.  This was even steeper than the Big Fin – 500’ climb in 4/10 of a mile.  Felt like straight up.  Once on the top it was very rugged for a few miles, up and down, up and down, very rocky – in fact much of it was hiking along solid rock – and it was tilted at an angle.  It was along an escarpment to the left with a vertical cliff to the right – which means for a several miles I was hiking/jogging tilted to the right. Which given my political inclinations, I thought was kind of funny!  The views were breathtaking – along a knife edge of a cliff with the Makhtesh HaGadol, the Great Crater on my right side.  I was glad I got up there so early in the morning, it was stunningly beautiful in the early morning light.  I would see occasional groups of ibex on distant ridges or far below in the crater.

After a few miles of that, it got a little easier.  There was a big descent and then a climb right back up to the top of Mt. Karbolet, where I took a break and admired the view.  It was 10am; took me four hours to make 10km, much slower than my usual pace on the trail, which is 5km/hour or so.  Someone had left a note under a rock from some other hikers (in Hebrew). Basically said “enjoy the awesome view, was fun hiking with you…”

From Mt. Karbolet the trail had about another mile going up and down to a few other peaks overlooking the Makhtesh, and then it started a descent into Nahal Afram.  I thought the hard part of the day was over.  Man, was I wrong!

Turned out the Karbolet itself was a little easier than I expected, but getting down Nahal Afram was a LOT harder than expected.  Ran into a couple of hikers who were heading the other way, we stopped and chatted about the trail for a few minutes.  They said there were a few steep sections on the way down.  Rather an understatement.  There were several sections that had the metal handholds hammered into the rock.  There were several places that SHOULD have had those handholds and didn’t.  There were several places where there were small pools of water, presumably dry most of the year, but full of water now, that I had to navigate around.  In some cases it was pretty difficult and involved putting myself in some precarious positions.  I was seriously glad I did not have a full backpack.  Passed another group of hikers heading the other way, this one about half a dozen people.  Compared to what I usually see on the trail, that’s like “rush hour.” Took one fall on the way down, torqued my shoulder a bit, but fortunately don’t seem to have done any real damage.

Finally got down to the bottom of Nahal Afran around 1pm, and from there the going got a little easier.  I took a break for lunch.  The temperatures were getting hotter, and there wasn’t much in the way of shade.  I sort of huddled under a bush that provided a little bit of shade, sort of picturing Jonah and his bush at Nineveh.

From here on the trail was mostly flat, but it was still slow going for a few miles.  I took a shortcut.  Instead of following the Israel Trail to the Mador Night Camp I took a black trail which skipped the night camp and rejoined the Israel Trail, cutting probably 4 or 5 km off my day.  Since I wasn’t spending the night there I didn’t see much point in going down to the camp and back.  The first few miles were slow because it was a large flat rocky expanse.  Running on pieces of flint is not very easy.  Much of the way there was no path, just the occasional path marker across an expanse of flint.

Eventually there was a trail which made the going somewhat easier.  After another hour or so, about mile 15 or 16 I came to an area that was a huge graffiti field – people took the dark flint and wrote things and made pictures on the lighter colored sand.  I spent a few minutes wandering around reading graffiti.  Saw one political piece: “Stop Capitalism!”  My reaction was, “Yeah, right.  The alternatives work so well…”

By now it was 3pm, it was hot, I was tired, and I was running low on water.  About 3:30 I made it to the junction where the Israel Trail heads off to Akev; I was taking a different route from here to get to Midreshet Ben Gurion.  On my next jaunt I need to get back to this spot to rejoin the trail. I took me about another hour and a half to get to Midreshet Ben Gurion, about 7km.  There was a large hill at end, a climb of 600 feet, which may not sound like much, but when you’re hot, tired, out of water, and have already covered 20 miles, it was a challenge.  I wasn’t making great time getting up that last hill.

I got a hold of Lauri on the phone and tried to arrange to rendezvous with her on a dirt road, but she had a hard time finding where I was talking about, so I ended up having walk about another mile further than I would have if I had made a beeline for Sde Boker.  So much for trying to find shortcuts. But we connected around 5:30, after over 11 miles on the trail.  I had carried 4.5 liters of water and over a liter of Gatorade, but it wasn’t enough – for that distance/heat/difficulty I should have had at least another liter or two.  Was a good lesson to receive early on in the desert crossing.  Then again, I won’t have any other days as difficult as this one was. But it was a great day.  Awesome views and with the distance covered, a real sense of accomplishment.  I’ve now spent 39 days on the trail; probably about another 13 until I get to Eilat.

At the start near the Oron Phsphate factory, 6am

The first of several "straight up" sections.

The trail goes right along the edge. Given the angle, I was walking tilted to the ri…

The top of Mt Karbolet. Arrived here about 10am. 4 hours to cover 10km…not my usua…

Some hikers left a note under a rock to some other hikers — basically, "enjoy t…

Still some water in pools…some of them were very difficult to get around.

In some places the rock formations look like abstract sculpture.

There was a huge field of graffiti made from dark stones. I wonder if the people who…

At the end of the trail section; from here the trail goes up Akev. I continued to Sd…

One last hill, when I was really too hot and tired and low on water to enjoy another …