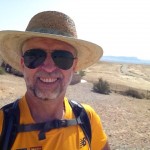 When I tell people I’m doing the Israel Trail in sections, they often ask “how do you deal with getting back to your car?”

I think I’ve now covered all the possibilities.  This trip was the first time I actually did a “round trip” on foot. So in terms of getting from the finish back to my car I’ve now run, rode a bike, taken a train, a taxi, a bus, hitchhiked and had someone drive me.  No boats or helicopters yet, but there’s no more water until I get to the finish and helicopters are pricey.

My last time on the trail, Day 41, we bailed about 9km short of our goal, the town of Mitzpe Ramon.  We were very low on water and my hiking companion was feeling pretty worn out.  I got someone to pick us up.

But that meant that on this day I had get back to that point to start the day.   As I mentioned in the blog last time, my Israeli friend who picked us up was sort of like “crazy American, why be so stringent about it?” But I’m bound and determined to be able to say that my feet carried me the ENTIRE length of this country, and that means no shortcuts.  I tried to find someone with a jeep to give me a ride out there, but no luck.  So I ran there and ran back. So my day was 18km longer than it would have been if I had started where I had originally planned to start for this trip.

I got up early and was on the road for Mitzpe by a little after 6am.  With a stop for coffee enroute I pulled into the parking lot at Desert Shade Eco-Lodge a little after 830.  Took me an hour and a half to get to the “start,” where I took a brief break, and turned around and ran back.  Along the way back I ran past one of those ubiquitous “stay out firing range” signs.  I think for the first time I actually heard sounds of firing coming from the direction of the firing range, and it sounded like artillery, not small arms.

I was back at Desert Shade, 18km down, by noon.  Stopped for a lunch break, and continued on my way.  There’s a gas station with a café around the corner, so I got a frozen coffee beverage – nice thing about 25km days, you can justify pretty much any amount of calories you want.  The first 11km total were a pretty gentle climb, about 130m (400’).  The trail goes along the promenade above the crater.

I decided to cut a few kilometers off the trip by not following the official Israel Trail all the way out to field school.  Instead I took a green trail from the promenade straight down into the crater.  The drop down into the crater is steep and rough – 300m (900’) in 2 km (1.2 miles).  Was pretty slow going because the trail was so rocky.  Saw some very cute baby ibexes.  They did a better job of navigating rough terrain than I did.

Once down at the bottom of the crater I saw the first other hiker I saw for the day, a young woman in shorts (not the best hiking attire IMHO – long pants provide both protection from the sun and protection from spiky plants) taking pictures of a bush.  I said hi, but I guess she wasn’t feeling talkative.

About 15km from my start the trail crossed Nahal Ramon, where there was a large acacia tree providing some welcome shade. Was a good place for a break.  About 3km further along the trail climbs “Shen Ramon,” Ramon “Tooth.” I’d been watching the landmark from some time, it rises steeply from the makhtesh floor.  It was quite a steep climb, but short – 130m in 1km – 400 feet in half a mile.  By the time I got to the top I was ready for another break.  The day was getting pretty warm.  Fortunately since I was able to restock water in Mitzpe I still had plenty of water.  The view at the top was spectacular.  The peace and quiet of the desert, however, was regularly disturbed by F16s buzzing by at an altitude not much higher than where I was sitting 100m above the makhtesh floor.

There’s an even steeper descent on the other side of Shen Ramon going down – 160m in 1km. By now I’d covered 20km, it was pretty hot, and I was getting pretty tired.  After another two km I had a choice to make: take the “easy way” out – 500m to the road, and then walk along Highway 40 to get to my end point for the day, Gevanim; or the “hard way,” another one of those steep, short, 100m climbs up the “Ammonite Wall” with a 100m descent on the other side to end up at the same place.  It had been a long day.  It was hot.  I was tired.  I was very tempted to “wimp out,” and take the easy way, but I decided I’d rather do the climb than walk along the highway.  Walking along highways is not great fun.  So after another short breather I turned left on a green trail and once again scrambled up 100m climb in 1km.  On the way up I passed the only other hikers I saw on the trail all day – a Canadian couple from Montreal.  They assured me it was only another ten minutes to the top.  Which was good, because I was starting to run out of steam.

Ammonites are an ancient form of marine life, related the nautilus.  I didn’t actually see any along ammonite wall, although I did pick up what probably was an ammonite shell earlier in the makthtesh.  Not what you expect to find in the middle of a harsh desert – sea shells.  But there are some around from the days when this area was under water.  From the top I could see my destination below – a very welcome site indeed.

As I was going down though, I started to get a little worried about how long it would take me to get a ride – it seemed like there was only one car every fifteen minutes or so. I got down to road around 5.  It had been a long day, and I was tired and ready to relax.

As I had worried, it took a while to get a ride.  But after half an hour or so I got picked up by a nice young couple with an 11-month-old baby. They are also hikers, so were sympathetic.  They insisted on giving me a ride all the way to my car.  I described Desert Shade to them, and they were interested in checking it out, and they got into a long conversation with one of the employees there, so maybe I made a nice connection for them as well. I was too tired to stop and visit with the owner Ziv – I just wanted to head home and have a shower and dinner.

The next section on the trail will be another backpack section – two days, crossing across the Negev from the side served by highway 40 to the side served by highway 90.  Will probably get Lauri to drive me.  Not sure yet if I’ll be able to do it before it gets too hot.  I’ll be watching the weather.  If I get a couple of days with the high temperatures no more than 30C (86F) I’ll give it a whirl.  Otherwise it’ll wait until fall.

“Wikiloc Map http://www.wikiloc.com/wikiloc/view.do?id=6895140
I did 9km more than on the Wikiloc map because I had to run to the starting point from Mitzpe … was a long day.”

In Mitzpe Ramon. Had to run 9km to get back to my starting point.

You often see these warnings about "firing zones." Today I actually heard …

You don’t expect to see sea shells in the middle of the desert. I think it may be an…

I parked my car at the Desert Shade Eco-Lodge, which is also the home of the Rujum Wi…

Shen Ramon (Ramon Tooth). I climbed it later in the hike.

Saw lots of baby ibex on this trip. A few times they just froze when I came near, st…

I only saw three other hikers on the trail all day. This woman taking pictures in th…

Another one of those relatively straight up climbs. I’m used to them by now.

Highway 40 and my finish for the day.

There were very few cars on the road — it seemed like one every five minutes. I was…

Women of the Wall, Fighting for the Torah