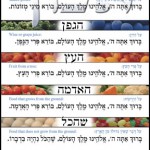 A few days ago someone posted a question on Facebook: if you are eating food that is not kosher, should you still say a blessing?

Most traditional rabbis will instinctively say “no.”  After all, eating non-kosher food is a sin, and you shouldn’t say a blessing for doing a sin. There is also a general principle that you should not fulfill a miztvah (commandment) by doing a sin.

But I thought it was an interesting question, and decided to do some research, which I wrote it up in the form of a teshuva, a Jewish legal opinion which you can read at this link: “Reciting a blessing over non-kosher food.”

My first point of research was to discuss it with a few people.  The initial response of the people I spoke to was at odds with the rabbinic “instinct.”  I discussed it with both my 13-year-old daughter and my wife — both of whom are quite knowledgeable Jewishly — and both of them felt you should say a blessing.  My daughter Devorah’s logic was “why add the sin of not saying a blessing to the sin of eating unkosher food? And besides, maybe pausing to say a blessing will remind the person not to eat unkosher food.”  Lauri felt that you would still want to thank God for sustaining you.

Reviewing the sources, it turns out there is some support for those who say you say the blessing.

Even though the Shulhan Arukh, the single most authoritative source of Jewish law, says you do not say a blessing on food that is not kosher there are other rabbis who disagree.  One rabbi, the Tashbetz (Spain, 14th c.) uses the same logic as Devorah: if you are already sinning by eating unkosher food, don’t make it worse by neglecting to say a blessing!

On a practical level, in a typical meal some of the food eaten will be kosher, so a blessing definitely should be recited over the food items that are kosher.

If you want to see the full logic, go to the paper.  For those who just want the bottom line, here it is:

While we of course want to encourage all Jews to follow a kosher diet, we need to acknowledge that we live in an age when many Jews do not follow all the commandments all the time (was there ever an age when they did?).  There are traditional families that have a custom of keeping a kosher home and eating whatever they like when they eat out.  There are people on a path toward greater observance who are not yet fully observing the laws of kashrut.  We wish to encourage such people in their desire to observe the commandments. It would be a mistake to put barriers in their path.

The God Who Hates Lies