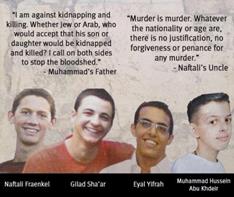 I don’t remember what I said that caused it, but early this morning as I was getting ready to head out on a bike ride I said something that caused my wife to respond “wow, you’re a little grumpy this morning.”

Yeah, I was grumpy this morning. I’m probably not the only person in Israel feeling grumpy today. It’s been a hell of a week.

On Monday we got the news that the bodies of the three kidnapped Israeli teenagers, Eyal Yifrah, Gilad Sha’er, and Naftali Frenkel, had been found. It was no longer a kidnapping – it was murder.

The three boys were buried side by side on Tuesday.

Wednesday morning we woke up to the news that a 16-year-old Arab kid, Muhammad Hussein Abu Khdeir had been murdered in Jerusalem. There is no final conclusion yet, but the evidence increasingly points to it being a revenge attack by Jews.

Wednesday afternoon there were riots, and three fires burning around Jerusalem. I rescheduled that evening’s interfaith Torah study at Emmaus because I was worried about problems getting there.

There were more riots yesterday, both Jews and Arabs committing acts of violence, calling for revenge.

I’ve been going to the Hartman Institute’s summer Rabbinic Seminar, enjoying first rate learning with friends and colleagues from the US and around the world – appropriately enough, the theme for this year’s seminar is “war and peace.” Wednesday night we had a discussion with Yossi Klein Halevi, author of “Like Dreamers: The Story of the Israeli Paratroopers Who Reunited Jerusalem and Divided a Nation.” Yossi said he had gone downtown to participate in a Tag Meir (“light tag”, a response to “Tag Machir,” price tag, attacks on Arabs) demonstration calling for peace, and when he got downtown he saw a group of young people who had taken memorial candles and organized them in a way that they read מוות לערבים, “death to Arabs,” and he had to leave – he just couldn’t be out in public at that time, and I know how he felt.

Yesterday I watched a video of Rachel Fraenkel, mother of one of the slain teens and a Torah scholar, eulogizing her son. Her eulogy is in Hebrew, but you don’t need to understand Hebrew to feel her pain; you can see it here. When she said תנוח בשלום ילד שלי, “rest in peace, my child,” I lost it and started crying. No parent should have to say such words, and especially not under such circumstances. I don’t know how she managed to keep herself together. I almost lost it eulogizing my mother, I can’t imagine what it would be like to eulogize a child.

And then I was aggrieved by things friends were posting on Facebook. Both Jewish or Israeli friends and Muslim friends. People that I know to be good people posting things or making comments that were not at all comforting and not at all helpful. I’m not even talking about calls for revenge, etc. There are plenty of things like that floating around cyberspace right now, but thankfully, not much in my social circles. But even in my social circles there was plenty that bothered me. Jewish friends posting articles about Palestinians celebrating when they heard the news that the teens were dead, saying, “see, we’re better than that.” A Muslim friend who posted a collection of hate-filled praise of the Arab kid’s murder, and calling it “mainstream Israeli response” (it’s not). I hate hate hate the smug, self-satisfied gloating of “we’re better than they are.” There are people filled with hate on both sides, and there are good people on both sides. As long as we persist in the whole “us” versus “them” mentality we are perpetuating stereotypes that make it easier for hate and violence to blossom.

The same exact mentality leads to:

We also got the sad news that a leading light in the Jewish world, Rabbi Zalman Schachter-Shalomi, passed away. Reb Zalman was one of those amazing figures able to breathe new life into an old religion. Shaul Magid wrote in an obituary

A tireless organizer and spiritual architect, Schachter-Shalomi single-handedly created a new form of Jewish practice and spirituality known as Jewish Renewal, founded on the idea of Gaia consciousness: the notion that the earth is a living organism and that human civilization needs to construct religion to frame its responsibility to the planet. He developed a theory of eco-kashrut that incorporates environmentalism and animal rights as an integral part of Jewish dietary practice.

I never had the merit to meet Reb Zalman personally (I had hoped to, and now, alas, never will), but his writings and his students have inspired me. May his memory be a blessing.

I also have friends who’ve been struggling with various crises, mourning for a deceased parent, business problems, relationship problems, family health issues. And I have a few issues of my own…so if I was a little grumpy this morning, I guess it’s understandable why. The world has not seemed a friendly place this week.

There have been a few bright spots in an otherwise dismal week.

I am against kidnapping and killing. Whether Jew or Arab, who would accept this his son or daughter would be kidnapped and killed? I call on both sides to stop the bloodshed.

Murder is murder. Whatever the nationality or age are, there is no justification, no forgiveness or penance for any murder.

The people hurt most directly call for peace, not revenge.

I know I’m not the only one troubled by what people have been posting on social media. Last night, feeling pained, I posted the following to Facebook:

That post has already received over 60 “likes” and a long string of comments. There are a lot of good people out there who share my pain at the negativity being put out there by many.

Last night I went to an interfaith gathering – Jews, Muslims, Christians – in Beit Jalah, a suburb of Bethlehem in the West Bank (well, at the entrance to Beit Jalah, one of those places that both Israelis and Palestinians can safely get to. We were talking about “neighbors” and “neighborhood.” We all hope to be good neighbors to each other. And the Palestinians came despite the current situation making it more difficult for them – the leader of their group had to take a 30km detour to go home because the IDF closed a road he can normally use.

So by now, you may be wondering, what does this have to do with killing Balaam?

This week’s Torah portion is all about the story of Balak, king of Moab, and Balaam, the non-Jewish prophet, and their attempt to curse the Jewish people. Balaam consistently said he can’t curse the Israelites unless God tells him to. Balak gets very frustrated with him, and they make numerous attempts.

Why numerous attempts? Psalm 30:5 says “His anger lasts only a moment. His favor lasts a lifetime.” The midrash says

And no one has ever been able to fix precisely this moment [that God is angry] except the wicked Balaam, of whom it is written: He knows the knowledge of the Most High. Now, he did not even know the mind of his donkey; how then could he know the mind of the Most High? The meaning is, therefore, only that he knew how to fix precisely this moment in which the Holy One, blessed be He, is angry.

The idea being if Balaam tried to curse the Israelites at that exact moment during the day when God is angry, he would have been able to accomplish his goal.

There are many people on both sides of the conflict – Jews and Arabs alike – trying to call down God’s anger on the “other.” Calling for revenge. Calling for punishment (not just of the perpetrators, who should be punished, but of entire societies).

If Balaam knows when that moment of God’s anger is, then it’s time to kill Balaam. We don’t need to get God’s anger involved in this conflict. The anger of people is quite enough. We don’t need anger from God or anyone else. We need compassion, love, and peace.

Liars, Thieves, and Hypocrites at the Chief Rabbinate