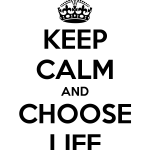 I call on heaven and earth as witnesses today that I have offered you life or death, blessings or curses. Choose life so that you and your descendants will live. …Deuteronomy 30:19

There are some verses in the Torah that always jump out at me — and this is one of them.

A few years ago I wrote about a very similar verse that appears in parshat Re’eh, “Behold, I set before you today a blessing and a curse;”  (Deuteronomy 11:26), asking why would anyone choose a curse?  Of course, the reason is some people have a hard time telling the difference — a short term blessing can turn out to be a long term curse.  It all depends on time perspective, as in people who take drugs to dim the pain of some crisis, but long term it destroys their lives.  It looked like a blessing at the time, but turned into a curse.

But what about choosing death?  Isn’t self-preservation so deeply ingrained that everyone would always choose life?

The recent suicide of Robin Williams was a shock to many of us.  How could someone with so much going for him, so much talent, seemingly so much to live for end up choosing death?

It’s a little easier to understand how someone who has a terminal illness and is in great pain might decide it’s better to just call it quits. But Robin Williams was not in that kind of situation, so how do we make sense of it?

The truth is, he was in that kind of situation, in a way.  Severe depression causes pain that is every bit as real to the person suffering from it as anything physical.  It can leave the person feeling just as hopeless, just as ready to say, “it’s easier to just call it quits now.”

Sometimes depression can even rob the sufferer of the sense that anything can be done about.  While it’s true that some people do not respond to any kind of treatment for depression, for many others medication, therapy, and/or new treatments such as Deep Transcranial Magnetic Stimulation can provide at least relief if not a cure.

If you know someone who suffers from severe depression, who talks about suicide, don’t ignore it.  The American Foundation for Suicide Prevention has a list of warning signs and suggestions on things to do, that you can read here.

A few years ago after spending time talking with a congregant who struggled with such severe depression I wrote the below prayer.   If you suspect someone is so depressed that he or she may be suicidal, reach out to them.  You might be the light and love that gets through to them.

Prayer for those with depression
By Rabbi Barry Leff

to those who struggle with depression and despair

Shine your light to the dark corners of their souls

to await the dawn that follows the night

Help them to see the love that is around them

Bless them and those who care for them