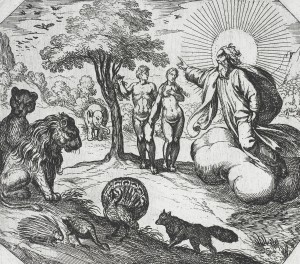 “And the LORD God said: ‘Behold, the man is become as one of us, to know good and evil; and now, lest he put forth his hand, and take also of the tree of life, and eat, and live for ever.’ Therefore the LORD God sent him forth from the Garden of Eden, to till the ground from whence he was taken.” …Genesis 3:22-23

What does it mean to be “God-like?”

The rabbis in the Talmud maintain it’s being compassionate:

Rabbi Hama, son of Rabbi Hanina, said: What does the Torah mean when it says: “You shall walk in the ways of the Lord.” (Devarim 13:5) Can a person really walk in the shadow of the Divine Prescence? Rather, it means that you should imitate the ways of God. Just as God clothed the naked, as it says: “And God made garments of skin for Adam and his wife and clothed them,” (Bereshit 3:21) so you shall clothe the naked. Just as God visited the sick, “And God appeared before Abraham [after his circumcision],” so you should visit the sick; just as God buried the dead, as it says: “And God buried Moses in the valley,” so you should bury the dead; and just as God comforts the grieving, as it says: “After the death of Abraham, God blessed Isaac his son,” so you too comfort the grieving.

The Torah itself, however, tells us that what makes us “like God” is knowing the difference between good and evil. And God apparently wasn’t so keen on the idea: He expresses divine displeasure after Adam and Eve ate from the Tree of Knowledge. He sounds grumpy when he says “’Behold, the man is become as one of us, to know good and evil.”

Does religion really help us distinguish between good and evil?

The rest of the world looks at ISIS and sees pure evil – people who want to impose their world view on others, people who are not shy about beheading infidels and others that disagree. Yet I’m quite certain that amongst themselves the ISIS people believe they are doing good – burning with holy fervor to truly establish God’s reign on earth.

I’m a religious person. I pray daily, I keep kosher, I observe the Sabbath and holidays. I pay attention to the ethical commandments, and in some small ways am trying to help the evolution of Jewish ethical thinking, at least in the framework of business ethics. I wasn’t always a religious person – for most of my life I was secular. I find that religion has helped make me a better person, more compassionate, giving more to charity, etc.  Some might say I still have a long way to go…but at least I’m working on it!

So it comes as a great disappointment to me that there is an inverse correlation between a society’s religiosity and its overall caring and compassion.  The most caring, compassionate, and least violent societies are also the least religious.

As a region, Western Europe has created what to many of us seems to be the most advanced society on the planet: very low levels of violence; solid safety nets for the disadvantaged members of society; economic systems that allow for individual incentive to make money without having the insane levels of income inequality seen in America and in banana republics.

Western Europe was also the home of the Enlightenment, the 17th century movement that transformed the world by emphasizing reason over religion and tradition. The most secular countries in the world are the ones actually coming closest to having societies that are most in line with what many of us religious people like to think of as religious values – caring, compassionate, non-violent.

America is “more religious” than Europe – fewer atheists and more people who attend church every week – and it is also far more violent and has much greater income inequality.

The parts of the world that seem to be “most religious,” wanting to create countries ruled by religion, are the worst – corrupt, immoral, and intolerant. 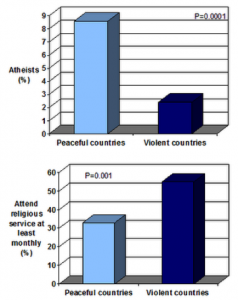 An interesting article on “Epiphenom: the science of religion and non-belief” finds that atheist nations are more peaceful than religious nations. You can read the article here. The author combined results from two different studies – one from the World Values survey that looked at atheism and church attendance by country, and the other Vision for Humanties “global peace index.”

For those of us who like to think religion is a good thing, the results are depressing. There is a clear correlation between religion and violence. The most peaceful countries are the most secular.

I don’t have an explanation for why. But it’s something that should be cause for soul searching in every religious community.

If knowing good from evil is what makes us like God, why is it that secular people apparently are more “God-like” than religious people?

What's happening in Sheikh Jarrah is not fair

A shameful day for America