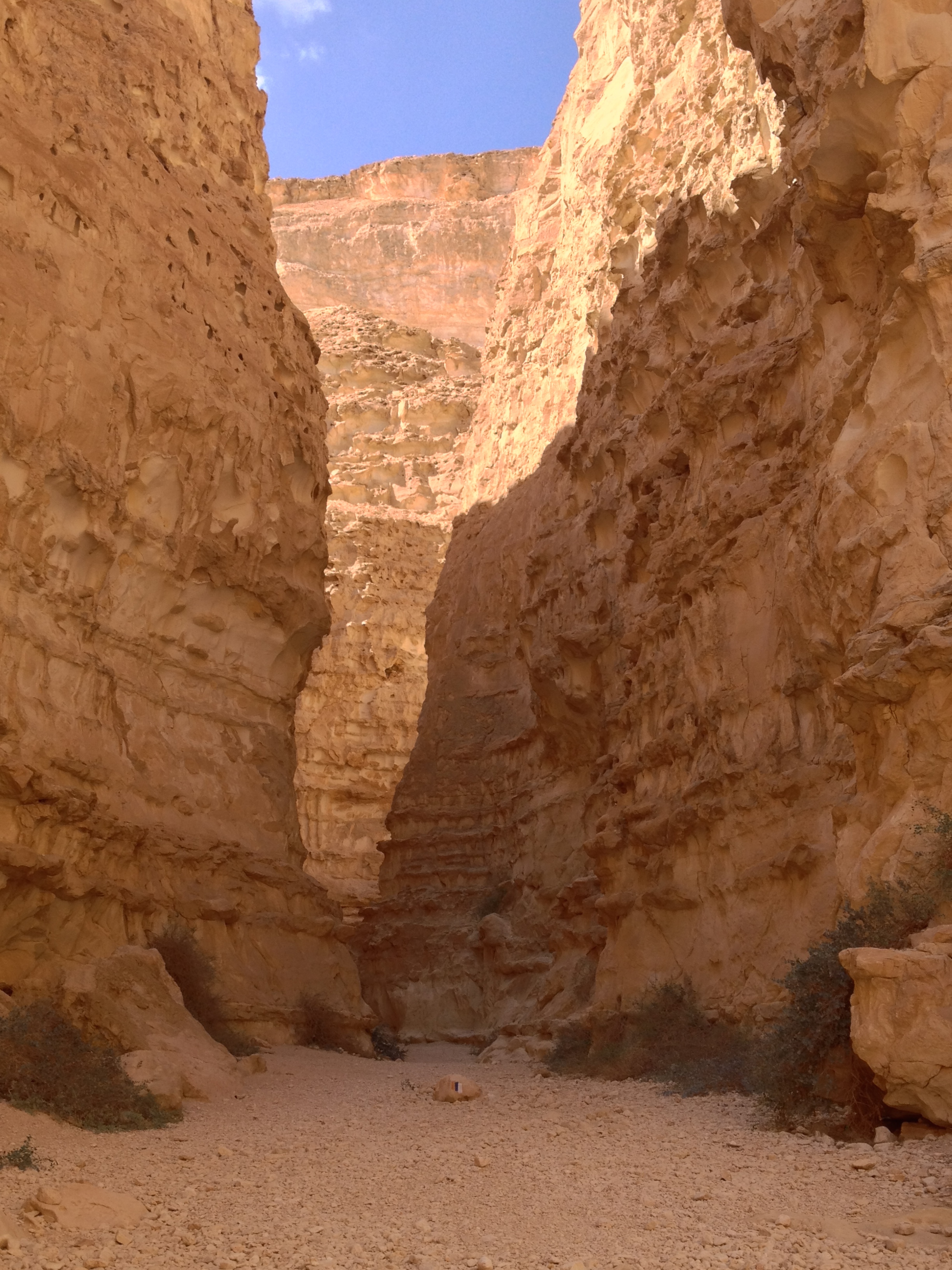 Barak Canyon is one of the most impressive sections of the Israel Trail.  The topography reminded me of Petra — narrow, sheer vertical cliff walls. It’s really a special place.

I had decided I would do this section just as a day trip.  It makes sense to do the next two as one chunk.  In retrospect, that was not a good idea.  Made for way too long a day.  I left home at 0530 and didn’t get home until almost 11:30pm.

I have a tendency to forget stuff when I go places.  I created a checklist to help with packing for long trips.  Maybe I should have a checklist even for day trips.  This time what I forgot was my sunglasses. After all, you don’t need sunglasses at 530am when it’s still nearly an hour until sunrise.  I remembered it when it was too late to turn around.  Just one of those little aggravations.  But maybe it was “gam zu l’tovah,” also for the best.  I did find some cheap sunglasses at a gas station, and in some ways they work better than my expensive Ray-Bans for trail — they fit tight enough not to slide down my nose once the sweat is dripping.

My last day on the trail I crossed Wadi Barak and finished in Paran (named in honor of a place n the Bible where Ishmael is said to have lived; the current location has no known actual relationship to the Biblical Paran, which was said to be near Sinai).  So I backtracked a bit and started at where the road to the Barak night camp intersects Highway 90.  Including a stop for coffee (decaf – with the Yom Kippur fast coming up I’m weaning myself off caffeine) I was getting on the trail at 0830.

The night camp is a few kilometers up the road. When I saw my first Israel Trail marker of the day at the camp it felt like seeing an old friend.  It had been two months since I was on the trail, much too long a gap.   I made pretty good time on the 9km total to the entrance to Barak Canyon, did it in about an hour and a half, jogging the whole way.  Wadi Barak gets it’s name from a mistranslation.  There’s an interesting explanation (in Hebrew) on Wikipedia.  The name of the wadi in Arabic was “Alabrik,” and there’s a similar word in Arabic that means “brilliant,” so they chose “Barak” which means lightning and has a similar sound.  The only problem is the actual Arabic word really means “kettle” or “tea pot,” so what they really should have named it in Hebrew is “Kumkum.”  I think “Barak” sounds better! 😉

Wadi is the Arabic word for a dry riverbed; the Hebrew word is nahal, and that’s the way the signs are labeled, “Nahal Barak,” but the terms are used interchangeably.

Once entering the canyon area, the walls start closing in, gradually at first, but then suddenly there’s just a narrow crack in the rocks, not a lot wider than person.  The lighting in the narrow part of the canyon is somehow very pleasing to the eye — it’s subdued and easy on the eyes, and yet you can see the brilliant sky and light reflected on some of the peaks above.  It’s also pleasantly cool down in the canyon.  The topography reminded me of Petra, except without the impressive carved buildings, tourists, donkeys, and souvenir vendors.

Climbing up the canyon is quite an experience.  There are hand/foot holds carved into the rock.  One stretch had a knotted rope you can hold on to as ascending.  Further up there’s a sheer wall with a ladder you have to climb.  The ladders is made of cables with metal rungs, so it’s not a solid ladder.  The bottom of the rock curves in, so the ladder is dangling, which is a little unnerving.  I took a pleasant lunch break in the shady canyon.  “Lunch” is perhaps a bit of an exaggeration.  I can’t really eat much when I’m working out that hard.  So “lunch” was half a bottle of Gatorade, a Clif bar, and some raisins and cashews.  I have found the hard way that if I eat too much on a hike I get indigestion.  That’s one reason for the Gatorade — a way to relatively easily get some “fuel” into my system.

From the top looking back down at the canyon it just looks like a gash in the earth.

From the top of the canyon it’s about 6km to the next site of interest, Vardit Canyon.  Most of it is pretty boring, going across the “fields of flint” that the Negev is full of.

During the entire day I did not see a single other hiker.  The only wildlife I saw were a couple of birds and two antelope.  It was on this stretch, however, that 3 dirt motorcycles went racing by.  I occasionally ride dirt bikes; I saw tire tracks in some places I never would have gone.  They were a little noisy, but it was just the one interruption and they were gone.  I didn’t mind, although it would get pretty tedious if they were a lot more common.

it’s hard to see these canyons from above.  The trail started going down, and I found myself wondering “so where’s the canyon?”  It seemed like I’d be back down to the level of the bottom of the wadis without getting into a canyon.  It just took longer to get to the entrance that I thought.  This time it was a descent into the canyon instead of a climb.  Descending is MUCH scarier.  At the start of the descent it’s a free-form scramble down a cliff face, holding on to iron handles that are pounded into the cliff.  This was a longer and more vertical stretch than most of the places that have those handles for support.  Not long after that came what had to be one of the most nerve-wracking things on the trail.  Another one of those metal ladders, this one going over the edge of a steep drop off, where there’s no way to see what’s below you before starting.  It drops you into a pit, which was dry this time of year.  I’ve seen reports of the pit being filled with a foot or two of water in the winter, which could make for an interesting time.  If it was much deeper than that I don’t know what you’d do if, like me, you electronics such as a phone/GPS with you.  Not a good idea to go swimming with your iPhone.

Even though Vardit is similar to Barak — narrow, vertical, etc., — I’m not sure why, but aesthetically somehow I liked Barak Canyon a lot better.

Coming out of the canyon you come into Wadi Paran, and have about 5km until the junction with Wadi Tzihor, and then another 5km to the highway.  Took another break at the junction, the sun was already starting to get low on the horizon, so I was able to find some shade by sitting up against the edge of cliff.  These last ten kilometers are pretty easy.  Flat dirt roads.  It was about 430 when I got to the road.

That’s when the next adventure started.  It took me 2 1/2 hours to get back to my car.  I figured I’d just hitchhike; turned out to be less reliable than usual today.  I got one ride pretty quickly, but they only took me about a mile to Tzihor Junction, the intersection of Highways 40 and 13.  I was taking 13 toward Paran, they were continuing south on 40.  Pretty quickly I saw that almost ALL the cars were just going on 40.  In half an hour only 2 cars went past me on 13, and neither stopped.  I was starting to get a little worried.  And I was definitely tired.  No buses on that stretch of road and a cab from Mitzpe Ramon would have cost a fortune.  So I was researching whether I could find someone who could pick me up and give me a ride when a car pulled over.  Instead of just offering a ride, however, the driver wanted to discuss a problem — he was very low on gas and had no idea where there would be a gas station.  I suggested Highway 90 is the best bet.  I didn’t remember if there was a gas station at the “101 Inn” near 13 and 90, but if there wasn’t for sure people there would be able to tell him where the nearest gas station is. So I got a ride back out to the main highway.

I assumed–wrongly–that it would be easy to get a ride on the busy road.  I tried for about half an hour, and decided to get some ice cream.  As I was having my ice cream I saw about 4 buses go by heading north, and spotted a bus stop a few hundred yards down the highway.  So I figured I could take a bus to Paran and walk the rest of the way.  I got back to the bus stop, and with some help from my wife checked the bus schedule and found it would be another hour before the next bus.  Not wanting to wait an hour I went back to the inn, and asked someone in the little convenience store there if she knew if there was someone around who could give me a ride.  Turned out there was someone heading my direction, so I lucked out.  I got back to my car a little after 7.

Drove for about half an hour and took  break for dinner at Aroma, and got back on on the road.  Of course with such a long day and early start, I was really tired, and had to pull over and take a nap.  It was 1130pm by the time I got home.  Should be about six more days on the trail until I reach Eilat.  Hopefully around the end of November.

Sunrise over the Dead Sea at Ein Gedi on my way down.

Barak Canyon is in that gap in the distance. Was about 9km from the Highway 90 to th…

Taking a break at the entrance to the canyon.

Barak Canyon is a beautiful place. The topography reminded me of Petra.

Looking down into Barak Canyon.

After reaching the top of the canyon there’s a long empty plateau, about 5km worth.

I did not see a single other hiker all day, but did see this three dirt bike riders.

At the top of a plateau, heading down for Vardit Canyon.

I came down this wall. Down is much creepier than up. The descent into Vardit Canyo…

There was no way to see what was below before descending the ladder. It goes down in…

Leaving Vardit Canyon it was 10km of flat and relatively boring to Zihor Junction, th…

This was some apparatus from the Israeli Hydrological authority. Probably measuring …

Finished the day at Highway 40. Had the hardest time I’ve had getting back to my car…

Sunset over the Arava.