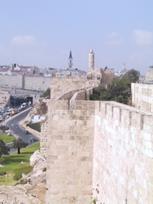 My brother and sister have both told me in the last few days that their friends who know I’m living in Israel have asked how we’re doing. They read about the terror attacks, etc., and are worried about our physical safety.

Physical safety is pretty low on the list of things I’m worried about right now. We have bigger problems that worry me. I could have written four or five pieces about the things bothering me right now, but I don’t have time, so I’ll provide this condensed version with my views on what’s going on in Israel right now.

A lot of what I have to say is critical of Israel, so I want to put it in context. I love this country. I love the people, I love the history, I love the meaning, I love the scenery, I love the weather. There are a lot of things Israel does right. We’ve absorbed immigrants from all over the world. We have a universal health care system that works. We have good higher education available at an affordable cost.

But, man, a lot of things are screwed up right now.

Security is an issue. The terrorist attacks are unnerving, even if I don’t feel personally threatened. I have criticism of the Palestinians too – anyone who could walk into a house of prayer with axes and guns and murder people at prayer is just disgusting. I don’t have words for it. The fact that so many Palestinians celebrated those deaths appalls me. The fact that the Jordanian Parliament had a few minutes of silence in honor of the terrorists who were killed appalls me. But I also know there are many good people among the Palestinians who are disgusted by such acts, so I don’t believe in painting an entire people with the same brush.

My government’s response to the attacks is horrible. Instead of calming things down, they are putting fuel on the fire, in several ways, all of them stupid and/or immoral.

The mayor of Jerusalem Nir Barkat, announced a “crackdown” on residents of East Jerusalem. Everything from illegal building to parking tickets and traffic violations are going to be treated severely. The government has proposed 20-year sentences for throwing stones, and they have demolished the homes of terrorists.

Why destroy the home of a terrorist? Can you really assume if it was a 23-year-old living at home, the parents could have stopped him? Anyone who thinks so has not raised kids. An angry young man will do what he wants to do, nothing will stop him.

The leaders of the security establishment have said such actions do not act as a deterrent. In fact it breeds more terrorists. If your house was destroyed because your older brother committed a terrorist act, how do you think that would make you feel towards the government that did such an action?

The right wing faction thinks that to stop terrorism we just need to hit the Palestinians harder, but that idea is mistaken. The other day I read a passage by Saint-Exupery about the civil war in Spain in 1936, and it’s equally true here:

…But a bombardment turns against the bombarder! Each shell that fell upon Madrid fortified something in the town. It persuaded the hesitant neutral to plump for the defenders. A dead child weighs heavily in the balance when it is one’s own. It was clear to me that a bombardment did not disperse – it unified. Horror causes man to clench their fists, and in horror men join together.

Adding further fuel to a difficult situation, right wing ministers have chosen this time to assert their right to go up to the Temple Mount, which the Palestinians consider a provocation. The police chief has pleaded with them NOT to do so. By asserting this right, they risk moving the conflict here from a political conflict to a religious conflict, which will just make things that much worse. Yes, I agree everyone should have a right to visit the Temple Mount. But I also think you have to use common sense and avoid actions that will raise tensions at a tense time.

And then there is the misguided “Nation-State Bill” that is working its way through the Knesset. Israel’s Declaration of Independence declared that Israel will be a “Jewish and democratic state.” Ever since the country’s founding, Israel has struggled with the tension between being Jewish and being democratic. This misguided bill, should it become law, would place the weight on “Jewish” over democratic. In any case where Jewish and democratic conflicted, “Jewish” would triumph. The exact version to be presented to the Knesset hasn’t been finalized, but early versions of the bill would downgrade Arabic so that it would no longer be an “official language” of Israel. The bill would serve to further marginalize and discriminate against Israel’s non-Jewish population, 2 million people, about a fourth of Israel’s population. And it would likely also be used to further discriminate against non-Orthodox Jews, as when it comes to defining “Jewish” the government always ends up caving in to the ultra-Orthodox.

Israel’s President, Reuven Rivlin, a right-wing politician himself, has criticized the bill. I have to say, I’ve been impressed with Rivlin lately: he has been speaking as the president of all Israelis, not just the Jewish ones, condemning racism, etc. He said in a recent speech (relative to the proposed bill):

The formulators of the (Israeli) Declaration of Independence, with much wisdom, insisted the Arab communities in Israel, as well as other groups, should not feel as the Jews had felt in exile.

The bill ironically is contrary to Jewish values: the Torah charges us to have one law for both the Jew and the stranger. Judaism is inherently democratic. This bill does NOT represent the highest ideals of Judaism.

Steven Pinker’s book, “The Better Angels of Our Nature: Why Violence has Declined,” makes the point that government’s monopoly on violence has served to reduce violence overall by breaking the cycle of revenge killings. But what happens if the government itself is part of the revenge cycle through discriminatory practices? Instead of being the solution, it becomes part of the problem. Pinker said:

A Leviathan [Hobbes’ strong central government] can civilize a society only when the citizens feel that its laws, law enforcement, and other social arrangements are legitimate, so that they don’t fall back on their worst impulses as soon as Leviathan’s back is turned.

It’s a difficult time in Israel. I believe we face greater dangers than terrorists and greater dangers than Iran. If we lose our moral compass – if we give in to the human desire for revenge against those who would harm us, if we become just another Middle Eastern country where the “strongest tribe” bosses over the other “tribes” we’re doomed in the long run.

So we keep working and praying for this country to live up to the great ideals of the Jewish religion. May we soon see the day when Israel is truly recognized as a “light to the nations” because we live up to grandest universal visions of the Torah and the rabbis.

The Benefits of Jet Lag

A Visit to Gush Katif