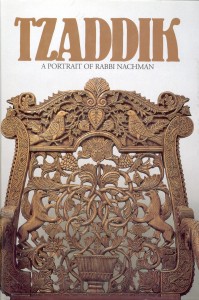 Many Jews who used to look to the East for spirituality – Buddhism, Taoism, etc. – have discovered Jewish mysticism and eagerly study kabbalah and chasidut. I count myself among that group. Yet there are some topics in chasidut that are “challenging” for the typical liberal Jew, and one of those is the role of the tzaddik. The tzaddik (“saint,” or especially righteous person) is more than just a rabbi. The tzaddik is the leader of his community, often called “the rebbe,” and his followers turn to him for everything. The Israeli film “Fill the Void,” gives a good representation of the role of the tzaddik: people turn to him for money, for advice (on subjects big – marriage – and small – which oven to buy), and they ask him to pray for them.

My chavruta (study partner) and I have been studying chasidut, specifically the teachings of Rebbe Nachman of Breslov (19th c. Ukraine). We recently studied one of his teachings on the concept of the tzaddik from his central work, Likutey Moharan. It’s a very appropriate teaching for this time of year, the week before Passover as it’s connected with Moses and redemption.

R. Nachman says that it is important to connect your prayers to the “tzaddik hador,” the “saint” of the generation, the great righteous man of your times. The tzaddik hador is like Moses who is like the messiah. Likutey Moharan I:2 teaches

And everyone must direct his prayer, that he should tie himself to the Tzaddikei Hador/righteous saints of the Age, because every Tzaddik Hador is an aspect of Moshe Mashiach (Moses-Messiah), as we have found, that the tzaddikim call each other “Moshe,” as in [the saying of the sages]: “Moshe, you have said well.” And Moshe is an aspect of Mashiach (Messiah), as is written (Gen. 49:10): “Until Shiloh comes” — this is Moshe (Zohar I 25b) Mashiach (Onkelos, Rashi). And each and every prayer that everyone prays, is like a limb of the SheKhINah/Divine Presence, which are limbs of the miShKaN/Tabernacle, which no Israelite was able to put up piece to piece, each one in its place, except Moshe alone. And therefore it is necessary to bring and tie all the prayers to the Tzaddik Hador, as is written (Exod. 39): “And they brought the Mishkan to Moshe,” and he knows how to put up piece to piece and make it a complete structure, as is written (there, 40): “And Moshe set up the Mishkan.”

Many of us who are drawn to chasidut tend to skip teachings such as this one. We are troubled by the concept of the tzaddik. For many of us, one of the things we like about Judaism is the idea that we don’t have intermediaries such as Catholic priests; everyone has their own relationship with God and can approach God directly. Thus we are troubled by the idea of asking a rebbe to pray for us. We don’t connect to customs such as sending a dead rabbi a fax with requests (the late R. Menachem Mendel Schneerson receives over 700 faxes a day). We may have the idea of a “rebbe,” but by us a rebbe is just the rabbi we would go to for advice on spiritual matters. We don’t “connect our prayers” to our rabbi.

I was thinking about this teaching though, and wondering whether there is something we can learn from it. I believe there is.

We’ve taken the idea of the Messiah and changed it from a semi-supernatural being who will change the world to our collective efforts to fix the world (there’s a book called “There is No Messiah and You’re It” which explains the concept). Why not do the same thing with the idea of the tzaddik?

Why pray to a tzaddik? It’s well known in the Jewish tradition that prayers for others are more efficacious than prayers for yourself. Even though she’s a righteous woman and prophet in her own right, Miriam isn’t cured until Moses prays for her. It’s the prayers of the fathers that get God to open the wombs of the mothers. The Talmud asks R. Yohanan, whose prayers were proven to be effective, why he didn’t just pray for himself. His answer was “the prisoner cannot let himself out of prison.”

It’s not that we pray to a tzaddik the way some Christians pray to saints; we’re not asking the tzaddik to directly perform a miracle for us. Rather we ask the tzaddik to pray for us, because God may listen to his/her prayers more than he listens to our own.

Ideally though, you shouldn’t have to ask the tzaddik to pray for you. If you are part of the community, the tzaddik prays for everyone in his/her community and hopefully has seen you and knows what you need and prays for you without being asked.

Another one of the roles of the tzaddik is giving advice, and this is also something that makes a lot of people uncomfortable. There’s a teaching in the Talmud that says, “no one in this generation knows how to give rebuke, and no one knows how to accept rebuke.” I’d say the same thing is true of advice. People give advice when no one asked for it, and people fail to ask for advice when they could use it.

Why can’t we each be a “tzaddik?” Why can’t we each take on those roles for each other? Pay attention to your friends and when they are having trouble of whatever sort – health, money, relationships – pray for them. Be there with “sage advice” when it’s needed and asked for.

You might feel you’re not righteous enough to act as a “tzaddik.” But we’re all sinners, each and every one of us. No one is perfect. Yet very few of us are completely evil. We all have good spots, good deeds we’ve done. As R. Nachman teaches, focus on the good. Bring your goodness to your prayers for other people. Pray from the part that’s good. Strengthen the side that’s good, and who knows, maybe over time you will become a real tzaddik, and Lord knows the world needs more tzadikkim.