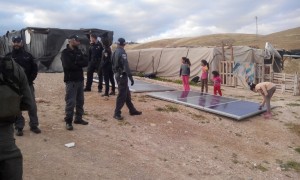 This week Jews all over the world celebrate Passover — the celebration of our liberation from oppression in Egypt.

One of the central messages of the holiday is, “don’t become an oppressor yourself.” The Torah commands us, “do not wrong or oppress the stranger, for you were strangers in the land of Egypt.” This commandment is so important that with some variations it’s repeated 36 times in the Torah.

With that message in mind, the actions of the IDF in the Bedouin encampment of Khan Al-Ahmar two days before Passover are especially heartbreaking.

Khan Al-Ahmar is a community of about 100 people living in tents and huts near the West Bank settlement of Kfar Adumim. Many of the families living there were originally from the Negev, but were displaced during the 1948 war. They have been living in their current location since the 1950s.

The living conditions in Khan Al-Ahmar are exceedingly modest. The encampment is “off the grid” — unconnected to power lines. Over the past few years the residents managed to acquire 13 solar panels (not enough for much more than lights). Some were donated to the ramshackle school built of mud and tires – a school that serves all the Bedouin children in the area. Some were purchased by the residents, and some were donated by a European aid agency.

On Wednesday, April 1 (sadly this is not an April Fool’s joke), two days before Passover, the IDF confiscated the solar panels.

The Israeli Civil Authority governing this small enclave wants to demolish it, but the High Court of Justice has ruled that it cannot be demolished until the residents are provided with alternative housing. Whether or not the residents want to move is irrelevant to the authorities.

The Civil Authority said that, in the meantime, no changes can be made to the structures. Since no permits were sought for the panels (and such permits would have been denied in any case) they were confiscated.

What’s the logic of that?

How does making life miserable for people who live under Israeli military authority help Israel in any way?

Just in time for Passover, the Israeli government is acting like Pharaoh, being gratuitously unkind for no reason other than because they feel like it and they have the power.

Yalkut Yehuda (20th c. Russia/US) teaches that Pharaoh withheld straw from the Jewish slaves not just to make them work harder (he could have simply increased the quota) but to crush their spirits. By not providing straw, Pharaoh added uncertainty to the lives of the Jews. Even if they met their quota one day, they didn’t know whether they’d be able to find straw and meet their quota to avoid punishment the next day.

The Israeli government apparently confiscated the solar panels with the exact same intent: to crush the spirits of the Bedouin living in Khan Al-Ahmar. The residents don’t know what else the Israeli government may decide to confiscate or destroy. Israeli policy toward Arab residents of Area C in the West Bank is aimed at making life sufficiently miserable for the residents that they will choose to relocate to Area A, which is under complete Palestinian control. That would make it easier for Israel to annex all of Area C, 60% of the land in the West Bank.

Rabbi Arik Ascherman of Rabbis for Human Rights, when called to the scene of the solar panel confiscation, quoted Rabbi Samson Rafael Hirsch’s Commentary to the Torah:

“Do not ‘wrong,’ Do not ‘oppress’…means to be illegally deprived of material or spiritual possessions…[thus, the full implication is] – Neither by words nor by deeds shall you hurt a stranger…[and] here the admonition against differentiating against strangers is directed primarily to the state as such. It is not to practice any discrimination and injustice against strangers because they are strangers… The main point is not to limit where s/he can live, or taking away his/her hold on his/her possessions.”

When Israel is accused of behaving “like Nazis” toward the Palestinians, it’s easy for us Israelis to ignore the charge. Such an accusation is so blatantly wrong – there are no “death camps” in the West Bank or Gaza – that we don’t even have to give it consideration.

But if they accused us of acting like Pharaoh – especially this time of year – it would sting a lot more, because it is closer to the truth.

Unlike Pharaoh, we have the Torah to teach us that what we’re doing is wrong.