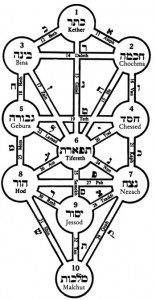 Today is the first day of the Counting of the Omer, the period between Passover and Shavuot.

An omer is literally a sheaf of grain. The Jewish calendar fixes the holiday of Shavuot (also known as the “Feast of Weeks” or Pentecost to Christians) as 50 days after Passover. The holiday of Shavuot is when the first grain offering from the new crop (the “omer”) would be offered in the Temple. Judaism has supplanted the agricultural roots of these two festivals with deeper spiritual meaning. Instead simply being a celebration of Spring as many pagan holidays around the vernal equinox do, Passover celebrates freedom and the Exodus from Egypt. Instead of simply celebrating the harvest, Shavuot is the day we commemorate Moses receiving the Ten Commandments from God on Mount Sinai.

In a way, Shavuot is the purpose of Passover. The reason God liberated us from slavery wasn’t just so we could hang out at the mall and play with our electronic devices. It was so that we could receive the Torah and refine ourselves as people and a nation, dedicate ourselves to serving God and making the world a better place.

The period between Passover and Shavuot is therefore a bridge between our becoming free and the purpose of that freedom. It’s a time for spiritual preparation for the revelation to come.

Kabbalah teaches that God interacts with the world through channels called “sefirot.” There are ten of these channels; the upper three are so lofty that normal humans can’t access them. Our awareness and interaction is with the seven “lower” sefirot. The Kabbalists teach that there are 49 aspects to our personality, reflecting the seven lower sefirot times seven, each sefirah repeated within each sefirah. The seven lower sefirot are:

The kabbalists by reflecting on “the trait of the day” we work on refining ourselves, improving ourselves. So this spiritual practice is sort of a mash-up of kabbalah (mysticism) and mussar (ethics).

I’m going to try (“bli neder,” without making a vow) to post something every day during the 49 days of the omer on the personality trait of that day. Other people have done similar things; there are different ways of understanding the sefirot, so this would be my interpretation.

Go to Day One – Chesed of Chesed.

2 thoughts on “Kabbalah and the Counting of the Omer”