When we made aliyah (moved to Israel) eight years ago, I wasn’t expecting to be involved in a civil rights battle. Human rights yes, but civil rights? It’s greatly ironic, but I find myself in Israel fighting for religious freedom – for Jews of all things. It is indeed a crazy world we live in.

The Jewish world is incredibly diverse. It’s not just that some people are “more religious” than others; there are different ways of expressing being religious. There are the ultra-Orthodox (Haredi) who practice a religion that is for the most part frozen in time a few centuries ago – a world where men and women pray separately, women are second-class citizens, not allowed to read from a Torah scroll, lead services, or serve as clergy. There are committed Reform and Conservative Jews who are also “religious,” but their custom is to allow men and women to pray together and to allow women all the same religious privileges that men have, including reading from Torah scrolls. There are committed Orthodox women pushing the boundaries of what’s acceptable in the Orthodox world by reading Torah in groups composed of just women. It’s not new for different communities to have different religious practices – that has been the case in Judaism for thousands of years, although the differences between different communities now is greater than it has ever been in the past.

One thing on which all agree: the Western Wall in Jerusalem is the holiest place in Judaism. It’s not part of the Temple – that was completely destroyed by the Romans in the year 70. It’s part of the retaining wall that Herod the Great built to support the mount on which the Temple stood.  Ever since the destruction of the Temple this has been the place toward which Jews direct their prayers. Jews who make the pilgrimage to Israel traditionally put a note with a personal prayer in the cracks of the wall. That’s a custom not limited to Jews; the Pope put a note in the wall when he visited Jerusalem.

Unfortunately, instead of making the Western Wall a national park, the Israeli government made it an ultra-Orthodox synagogue. Anyone who wants to pray there has to follow the ultra-Orthodox customs. Meaning women can’t read from a Torah.

After a series of court battles, women finally have won the right to pray together publicly, leading their own prayers, wearing prayer shawls and tefillin (despite ultra-Orthodox opposition). One thing remains forbidden however: reading from a Torah scroll.

In theory, it’s OK for women to read from a Torah there. The rabbi in charge of the Western Wall however, has foiled women by declaring that no one can bring their own Torah to the Wall (the excuse being that some might get mixed up with ones owned by the administrator of the Wall, or some might go missing) and he refuses to allow women to use one of the 100 Torahs that are available for men.

This month a group of men engaged in an act of civil disobedience. We formed a minyan on the men’s 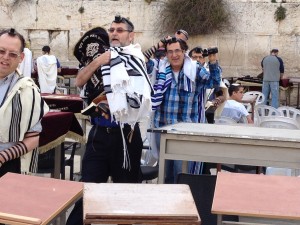 side, and of course we were able to borrow a Torah to read from. But when we finished our reading, we opened a small gate in the wall, a woman stepped in, took the Torah from us, and brought it back to the women’s side so they could read from it there.

It took a while before anyone noticed. We were singing and dancing on the men’s side as far as anyone else knew we still had the Torah there. But after a while someone did notice, and all of a sudden I found myself literally “fighting” for the right of women to read from the Torah. As ultra-Orthodox men were trying to push through the gate to get to the women’s side I was part of a group of men trying to hold them back. As a few managed to push through, I also found myself on the women’s side, not using my very rusty Tae Kwon Do skills, but just placing myself in between the men and the Torah – and occasionally wrestling with some ultra-Orthodox guy trying to get past me.

It was a bit of a melee, but short of a riot. My tallis got temporarily lost in the shuffle; one friend got pushed by a Haredi guy and hit his head; another was kicked by a Haredi man while he was laying on the ground where he’d fallen.

One Haredi guy was very upset – he claimed it was a “private Torah,” his own personal Torah, not one belonging to the Kotel. I still didn’t let him get past me. Of course, if it was a personal Torah, why is he allowed to bring one in, but women aren’t? The rule as was told to us is there are no private Torahs at the Wall at all.

One of my favorite moments was when Rabbi Susan Silverman jumped in front of a Haredi guy and yelled “Isha!” (“Woman!”) to remind him of where he was…he all of a sudden looked shocked and retreated, lest he touch a woman.

Pretty shortly after the physical confrontation broke out the police came, and wonder of wonders, defended the women! They kicked the men out of the women’s side (I was one of the last to go after the ultra-Orthodox had been removed) and allowed the women to continue reading from and dancing with the Torah.

The women finished their ceremony welcoming the new Hebrew month of Iyar, and the Torah was respectfully handed back to the men’s side and the waiting ultra-Orthodox Jews who reclaimed it.

The fact that the holiest site in Judaism is run as an ultra-Orthodox synagogue is but one of the many ways in which Jews don’t have religious freedom in Israel. As a Conservative rabbi, I cannot officiate at a state-sanctioned marriage in the land of Israel. So friends who want me to lead their wedding have to have a civil marriage elsewhere first (there is no civil marriage in Israel, either). In other parts of the world, Jews worry about the intermarriage rate; in Israel intermarriage is against the law. You can’t do it here. Which most of us find a rather too radical solution to the problem.

To a casual visitor, Israel looks like part of the Western world – we have a booming economy (recently joined the Organization for Economic Cooperation and Development, the OECD), we have the second most vibrant high-tech center in the world outside Silicon Valley, modern infrastructure, etc. But beneath it we also have a religious bureaucracy patterned more on Iran than on America or Western Europe.

Today we made a fight for religious pluralism. My wife and one of my daughters were on the women’s side wanting to join in the celebration with the Torah. I physically defended their right to do so.

We had a victory today. We made a point. But the battle is far from over.

PS. My friend who got pushed and hit his head, Charlie Kalech, was subjected to the further indignity of being arrested. He went to the police to file a complaint against the Western Wall Heritage Foundation employee who hurt him, and instead the police arrested him for disturbing the peace by giving the women a Torah. They “generously” allowed him to seek medical treatment, although they insisted he come back for further questioning later in the afternoon. Talk about blaming the victim. You can read about it in Haaretz.

In Praise of Jerusalem

7 thoughts on “Women of the Wall, Fighting for the Torah”