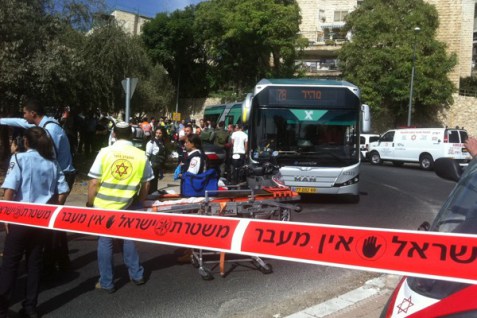 This is an updated version of an article that first appeared in the Jerusalem Post.

It’s hard to get any work done when you’re hearing sirens and helicopters overhead, checking the news every ten minutes, and updating Facebook every five seconds.

There have been two terror attacks near my home in Jerusalem in the last week. We heard the gunshots “neutralizing” the terrorist in the attack yesterday (Saturday, October 17, 2015).

We live on the “frontier” – in the southeast corner of Jerusalem, just on “this” side of the Green Line. From our windows, we can see the hill near Ramat Rachel where the Israeli and Jordanian positions faced each during the Six Day War. We walk and run up there almost daily. My wife’s chatted with Aziz, a shepherd from Tsur Baher who grazes his flocks in the Ramat Rachel olive fields and remembers the fighting.

Jews don’t go to Tsur Baher much, but Arabs from there visit our neighborhood to shop and go to the post office. We often see women in hijabs taking driving lessons on our street.

Earlier this week I was in Liechtenstein, a small, beautiful, and extraordinarily peaceful country in the central European Alps, nestled between Switzerland and Austria. It’s so peaceful it disbanded its army in 1868; there’s only been one murder in the last 15 years.

When I “checked in” on Facebook from the Frankfurt Airport enroute to Jerusalem, friends wished me a “safe journey” home. I wasn’t worried about the journey – but I was worried about what I was coming home to.

It sure wasn’t Liechtenstein.

The morning paper told of the previous day’s four terror attacks in Jerusalem, which injured five people. One of those seriously injured was a 13-year-old boy, out riding his bike.

Our 14-year-old daughter usually rides her bike or walks to school. This morning we drove her.

Last Tuesday (October 13, my first day back from Liechtenstein) I’d hardly finished my coffee when the sirens started. About a mile from our home, in Armon HaNatziv, two terrorists using knives and guns tried to hijack the #78 bus and kidnap the passengers. Two Israelis were killed and many were injured.

Our middle daughter usually takes the bus to and from school.  Tomorrow we’ll drive her.

And then yesterday, on Shabbat, our “Shabbat peace” was interrupted by the sounds of gunfire, followed a few minutes later by the sound of sirens. A vigilant person out for a walk noticed someone suspicious looking, and told the police. They found the suspicious looking person and asked him for ID, at which point he pulled out a knife and tried to attack the cops, who shot him.

This took place on a road I cross to get to the synagogue. It took place just outside the back door of a friend’s house. Other friends saw the sheet-covered body of the terrorist on their walk to shul.

Some peoples’ response to hearing a terrorist attack was foiled on the route to shul might be to stay at home. My response was “I need to get to shul.” Besides, I figured, correctly, there’d be police all over the place so it would be safe.

The more closely the violence comes to touching us, the more we think about getting out of town – at least for a while.

Everyone in our family has two passports — one Israeli, one American. My wife and I can earn a living from anywhere with an internet connection. We don’t have to stay here.

This morning my wife asked, “When would it be bad enough that we’d leave?”

Our oldest daughter, who’s doing her National Service, said, “Leave? If it got as bad as Syria, OK — but not before.” (She has a scooter – she can drive herself.)

My wife, on the other hand, was shaken by the (erroneous, as it turned out) report of a terrorist attack at Ikea. To her, that’s crossing an emotional redline.

On the Ikea-Damascus spectrum, I side with our daughter. Israel is home. We can’t abandon our friends who aren’t as portable as we are, and we knew this was a crazy place when we made aliyah.

We lived here for a year during the start of the Second Intifada. In fact, we had box 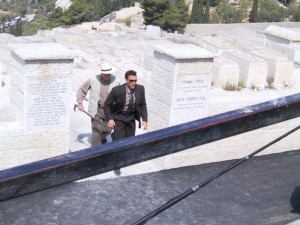 seats for the opening shots:  we were up on the Mount of Olives, being extras in a Jean-Claude Van Damme movie, when the fighting broke out on the Temple Mount. They had to suspend the filming of the violent action movie because of the sounds of real gunfire.

One of the reasons we came here was so that we could help, in whatever small ways, the process of bringing peace to this place and creating a utopia for the Jewish people in the Middle East.

I work with Rabbis for Human Rights, our kids are active in Kids for Peace and other interfaith groups, my wife marched in support of the interfaith Yad l’Yad School attacked by Jewish arsonists…

It’s not much, we know. But if we left we’d be doing even less.

Despite the stress, I remain hopeful. I still believe the vast majority of Israelis and Palestinians, Jews and Arabs, want the same thing:  two nations living securely side by side.

“Though he may tarry, I believe with complete faith in the coming of the Messiah.” I believe the same thing about peace – but I’m not holding my breath waiting for either. Especially not as long as Abbas and Netanyahu are in charge; neither seems serious about making peace.

In the meanwhile, something resembling normal life goes on. We can even laugh about the absurdity of the situation – about the Magnum bars, umbrellas, nunchucks, and selfie sticks that have taken the place of Iron Dome in this very personal war on terror.