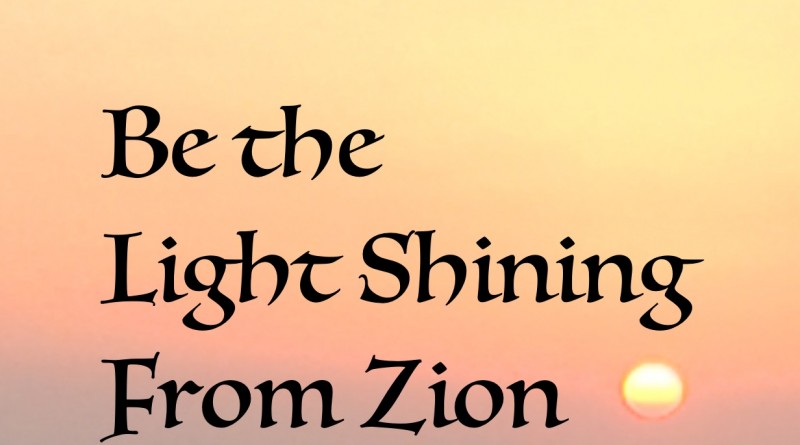 Or chadash metzion ta’ir v’nizkeh kulanu meheira l’oro, may a new light shine forth from Zion, and may we speedily merit its light.

Every day I say the same words of prayer that I have said literally thousands of times before. And yet despite – or perhaps because – of that familiarity different things jump out at me on different days. That’s part of how the fixed liturgy works. The words may be the same every day, but we’re not. We’ve seen different things, done different things, so some words connect and resonate on certain days and others don’t.

This morning I got to the line in the morning prayers where we say “may a new light shine forth from Zion, and may we speedily merit its light” (that line is less stilted in the original Hebrew) and it had special intensity. These feel like dark times in Zion. Hate seems to be on the rise. There has been a wave of terror, Palestinians attacking Jews with guns, knives, and cars, including a few events very close to my home. A peace loving friend of several friends of mine was killed. And then we also have Jews behaving badly. An innocent bystander, a refugee from Africa, was lynched by an angry crowd when he was mistaken for a terrorist. A colleague from Rabbis for Human Rights was attacked by a Jew with a knife when he was defending the right of Palestinians to harvest their olives near Jewish settlements.

So I think that darkness was weighing on me when I came to that line this morning, and I added a prayer of my own, “please God, send that light, we need it.”

And I realized with a start, I am that light. Or at least I’m trying to be a part of it.

Mahatma Gandhi said “Be the change you want to see in the world.”

I would paraphrase it “Be the light shining from Zion.”

I think another reason that line of prayer jumped out at me this morning is because of a thought I had yesterday. I flew from Israel to America yesterday, the start of a month here in the “old country.” As I was driving through the typical American suburban scenery on the way to my motel I was struck by a thought that it would be boring to live in such a place. I know it’s a great life for many, and so there is absolutely no criticism there. But for me, compared with living in Jerusalem, the center of the most important issues to effect the Jewish people in 2,000 years…well, there’s no comparison.

And it’s not because there are no battles to be fought in America. There are. This is an important time for America. There are wildly different visions for the future of America being offered by the current round of candidates for president. The nation is becoming very polarized. A generation ago neither Donald Trump nor Bernie Sanders would have been considered viable candidates for president. Both are too extreme. Yet they are viable candidates. America may be asked to choose between radically different visions for the future.

Even though I also have a vision for America, the battle seems too remote. America is such a big country it feels impossible for your average person to make much difference. You can vote. You can even volunteer for the political campaign of a candidate whose views represent yours. But I never got a feeling in America that I could be an effective agent for change.

But in Israel it’s different. It’s a small country. It’s a new country. It feels so much easier to be able to have an influence. To do something that matters.

So today instead of cursing the darkness, I want to give a shoutout to the light. Praise my friends who are part of that new light shining from Zion. This is personal, so I’m not praising every organization that does something good. This is about people I know.

First and foremost in my mind is Rabbis for Human Rights (RHR). The organization’s work is incredibly holy. Bringing religious teachings of Judaism to the work of defending the rights of the “other.” Palestinians, refugees, poor people, we have lots of categories of “other.”  Rabbi Arik Ascherman, the colleague mentioned above, literally had his life on the line a few weeks ago defending the “other.” All of the staff work tirelessly and effectively. The board members volunteer huge amounts of their time to support the organization. My volunteer work with RHR helps me feel I’m contributing in some small way to the light shining from Zion.

Then there are my good friends Rabbi Susan Silverman and Yosef Abramowitz. Susan’s light shines on the issues of orphans and refugees. She is so offended by the way the Israel treats refugees from Africa, it’s a force to behold. And her other great passion is adoption; she created “Just Adopt” to help solve the crazy problem that there are tens of millions of children who need homes and millions of people who would give them homes and why can’t we put the two together??

And then there’s her husband Yosef, not content to save Israel, he’s working to save the planet from the hazards of climate change by working to break our addiction to oil with clean solar energy. He is literally a “light from Zion” with the work his company energiyaglobal is doing, especially in Africa.

Sari Revkin’s organization, Yedid, is on the front lines of promoting social and economic justice in Israel. They bring light to many people living in the darkness of poverty.

Two of my daughters, Katherine and Devorah, are strong supporters of Women of the Wall, working for the rights of women to pray at the Western Wall, which is really a much broader struggle – it’s part of the fight for freedom of religion for Jews in Israel. And I’m proud to be one of the male supporters of Women of the Wall along with my friends Charlie Kalech and Alden Solovy.

One of my other volunteer activities is working with the Schechter Rabbinical Seminary, the Conservative Movement’s rabbinical school in Israel. The traditional understanding of “light” as in the the prayer that started this discussion is “Torah,” and SRS is working to bring the Torah of a pluralistic vision of Judaism to Israel and the world.

Comedians Yisrael Campbell and Gary Rudoren shine a different kind of light from Zion, the light of comedy, and Lord knows we all need some light moments living in Israel. And my wife, Lauri Donahue, is also sharing the light of comedy with First City Improv.

And then there are my journalist friends, especially Jodi Rudoren (NYTimes) and David Brinn (Jerusalem Post) sharing with the world as accurate a picture as possible of what’s really happening in our corner of the Middle East.

I do a few other things to try and be a part of that light shining from Zion, interfaith work, teaching, and writing, but I feel my accomplishments are very modest compared with my friends. But even a small candle can go a long way in a dark room.

I realized after I asked God to shine Her light from Zion that we don’t have to wait for God to “shine a light from Zion.” There IS a new light shining from Zion. We just have to help the world to see it! I feel honored and blessed to have so many friends who are contributing to that light.

My apologies to my other friends in Israel working to shine a light from Zion that I didn’t mention here. There are too many of you! 😉

How to tell your dictionary comes from Israel