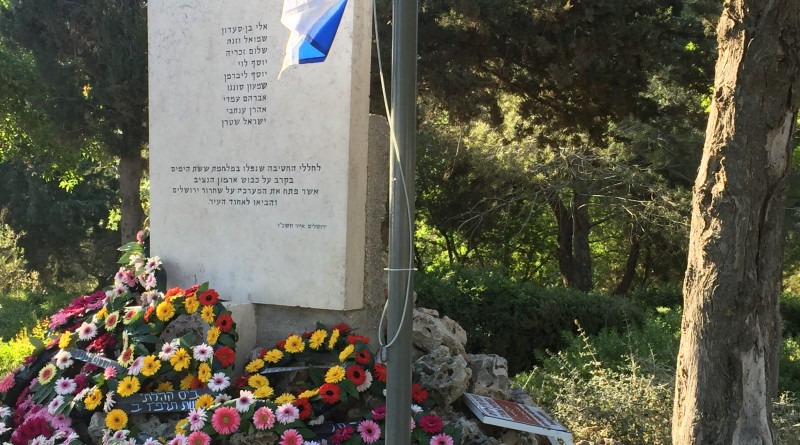 Today is Yom HaZikaron, Israel’s Memorial Day, although a better translation for zikaron would be “memory.” We remember those who made the ultimate sacrifice, giving their lives for their country.

On my run this morning I ran past a memorial to the soldiers who died defending my neighborhood in 1967.

I always have to let that sink in a little bit. These soldiers didn’t die in some foreign country such as Korea, Vietnam, Afghanistan, or Iraq. They didn’t die defending my country’s “strategic interests,” such as oil or stopping the spread of Communism. They died defending my neighborhood from an invading army that would have killed and/or driven out the people living here. The battle for Armon Hanatziv (East Talpiot) was a crucial turning point in the war, and the Jordanians were driven out from their outposts around the southern side of Jerusalem.

Most Americans don’t live in a place where there ever was a battle for their neighborhood. For those living in the east, where the Revolutionary War was found, the battles for the neighborhood took place well over 200 years ago. Ancient history. The battle for my neighborhood, on the other hand, took place in my lifetime.

Many of the soldiers killed were 19 years old. About 8 years older than I was at the time. I was thinking about those lives cut short as I continued my run after paying my respects at the monument. Everything I’ve done over the last 49 years – loves gained and lost, careers, children, grandchildren, learning, traveling, enjoying life, food, friends, so much that we take for granted – they never had the chance to experience.

The Talmud teaches that someone who kills a person destroys a world, and that’s so true. We’re all at the center of our own little world. Very few people live alone their entire lives. If you’re married you’ve created a small two-person world, and that world is destroyed if one person is killed. All the children and grandchildren those men killed that day would have had have never come into being…more worlds destroyed.

And we’re still having skirmishes in the battle for my neighborhood. Yesterday a terrorist from the adjoining Arab neighborhood of Jabel Mukaber stabbed two elderly women not 200 yards from the monument to those soldiers killed 49 years ago. Thank God they weren’t killed. But what kind of coward would stab elderly women out for some exercise? I often run in that area. There’s an old age home filled with Russian émigré pensioners nearby. Most mornings I see small groups of elderly Russian women out taking some morning exercise on that path. I’ve probably run past the women who were stabbed.

The path, ironically, goes right by the UN Headquarters for the region. The UN, which is supposed to be a symbol of peace, of international cooperation, brotherhood and good will.

So today we remember the fallen. But tonight the day will turn from Yom HaZikaron to Yom HaAtzmaut, from Memorial Day to Independence Day, and we’ll put aside our sadness and fire up the barbecues and celebrate the 68th year of the sovereign state of Israel, the reason those young soldiers gave their lives, to protect the citizens of this amazing little country. My home.