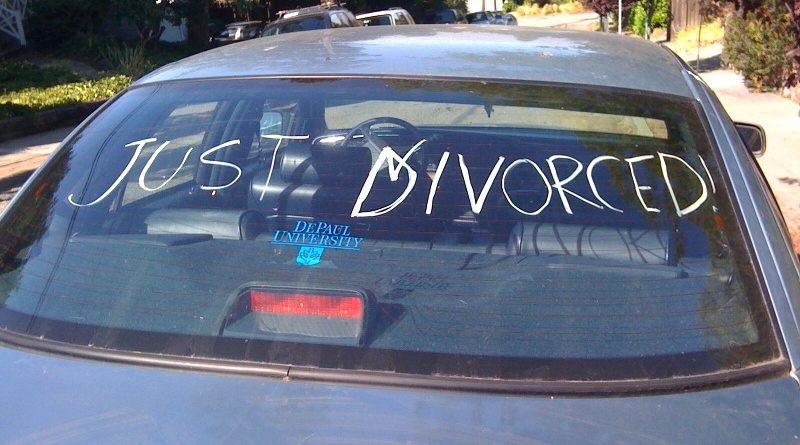 I assume pretty much everyone here this morning knows I was in Israel last week.

Some of you, but not all of you, know why.

I was in Israel last week to fulfill a mitzvah found in this week’s Torah portion, Ki Tetze:

A man takes a wife and possesses her. She fails to please him because he finds something obnoxious about her, and he writes her a bill of divorcement, hands it to her, and sends her away from his house (Deutoronomy 24:1).

Rashi’s comment on this verse: “Divorce is a mitzvah.”

Now this doesn’t mean, God forbid, that everyone has to get divorced at some point to fulfill this mitzvah. Divorce is what we call an “optional mitzvah,” similar to wearing a tallis. You don’t NEED to put on a garment with four corners, but if you do it has to have tzitzit, fringes, on those corners. We put on a tallis to show that we’ll go out of our way to fulfill this commandment.

However, no one goes out of the way to fulfill the mitzvah of divorce.

But what Rashi’s comment tells us is that if the marriage is over, if it fails to bring joy, if it fails to be a positive force in the couple’s lives, you don’t have to stay married. It’s a mitzvah to divorce in such a circumstance.

Now the commandment in the Torah is worded that divorce should follow if “she fails to please him because he finds something obnoxious about her.” You shouldn’t think there was something obnoxious in my ex-wife, the mother of three of my five children, Lauri. She’s an amazing person, a good mother, and remains my business partner, co-parent, and close friend.

It used to be that under civil law in America you had to have “grounds” to get divorced. Now, all states offer some form of “no fault” divorce.

The law in America was only about 1,900 years behind Jewish law.

There’s a whole tractate of the Talmud, Gittin, that’s devoted to the rules of divorce. The rabbis in the Talmud have an argument over what constitutes proper grounds for divorce:

The rabbis also discuss grounds for a woman to divorce her husband — for example, if he works in a profession that renders him obnoxious, such as being a tanner and coming home smelling horrible.

Either party is entitled to a divorce if the other party fails fulfill his or her obligations for conjugal relations, which ranged from once every six months for a sailor or camel caravan driver to daily for someone who’s unemployed.

But the bottom line is Judaism has had “no fault divorce” for almost 2,000 years. We don’t force a couple to stay married if either one of them wants out.

Nearly half of all marriages end in divorce. Practically everyone’s life is touched by divorce in some way – if you haven’t been divorced yourself, it’s very likely that a close friend or close relative such as a parent, sibling, or child has been through divorce. It’s hard to imagine there’s much of anyone in America whose life hasn’t been touched by divorce.

Yet we rarely talk about the subject. This is the first time I’ve ever given a talk on the subject, and in over 20 years of being a very regular shul goer I’ve never heard a sermon on the topic before. I suspect most of you have never heard the subject discussed from the bima before.

I’ve read literally thousands of Jewish books, and only two on the topic of divorce: the Talmud tractate Gittin that I mentioned earlier, and Rabbi Perry Netter’s excellent book “Divorce is a Mitzvah.”

It’s no wonder that so many people feel lost and alone when they find themselves getting divorced. We avoid talking about it, as if there’s something shameful about getting divorced. As if it’s announcing to the world that somehow the person who got divorced is a failure, a statistic, lacking in the capacity to make a relationship work for the long term, or a poor judge of character for choosing the wrong person in the first place. But divorce is not necessarily a failure of any sort; sometimes a marriage has just run its course and it’s time for the parties to move on to a new chapter.

For Jews, that process of “moving on” has both a civil and religious dimension. Here in America, many Jews who’ve been through a secular divorce never had a Jewish divorce. In the US it’s not required by secular law.

Israel, however, is different.

In Israel there’s no such thing as civil divorce for Jews, just as there’s no such thing as civil marriage. Anyone who gets married or divorced in Israel has to go through the official rabbinical court, called the “rabanut,” which is run by and according to the rules of ultra-Orthodox Judaism. The get, the religious divorce document, is also the document that makes you divorced in the eyes of the state.

In Israel, many men are banned from leaving the country and even put in jail because they refuse to give their wives a get. It’s a sad, immoral, and all too common occurrence that some men will refuse to grant a get unless they get financial or other divorce terms that they dictate.

In the Conservative world (at least outside of Israel), we’ve solved the problem of the recalcitrant husband in a different way.

If a man refuses to give his wife a get, and there has been a civil divorce, the beit din will issue a get that effects a religious divorce between the couple. This is based on an opinion cited in the Talmud regarding the ability of a beit din to annul a marriage. In the Talmud tractate Gittin, it says:

When a man betroths a woman, he does so under the conditions laid down by the Rabbis, and in this case the Rabbis annul his betrothal.

If you’re Jewish and were previously married to someone who’s Jewish and had a civil divorce but never had a religious divorce, let me know, I’d be happy to assist you in arranging for a get.

It’s a fairly simple procedure, and many people find it helps them get a sense of closure by having a ritual that goes with the end of a marriage, just as we have rituals at the start of the marriage.

I’ve also discovered that when people hear that I’ve recently been divorced, they often don’t know what to say.

It’s tricky. Every situation is different. If someone was in a bad marriage – one where there was abuse, for example, or endless fighting and bickering – the person will feel a real sense of relief at having gotten out of a bad situation. If the divorce itself was ugly, with bitterness, fighting for the loyalty of children, and racking up large legal bills, having the divorce process finished will be a great relief.

On the other hand, many marriages that weren’t terrible marriages end in divorce. For all sorts of reasons, a couple may grow apart over time. There’s probably no place on the planet lonelier than a marital bed from which intimacy has fled. In such circumstances divorce may be the right answer, and it may even be a mitzvah, but it’s still a sad situation. In the Talmud Rabbi Eleazar says “If a man divorces his first wife, even the altar sheds tears.” God shares our pain.

Last week as I was standing in the rabbinical court in Jerusalem my mind kept going back to the day 23 years earlier when my wife and I were married. That beautiful summer day in San Francisco so long ago, standing under a chuppah, we never imagined that it would end in front of a court of three ultra-Orthodox rabbis with my wife raising a hand-written divorce document over her head, tucking it under her arm, and walking across the room, becoming my ex-wife in the process.

A friend of mine told me that when she got divorced, when the procedure was completed one of the judges said, “Divorce is a mitzvah, mazal tov!”

If someone had said that to me, my response would have been, “Burying the dead is also a mitzvah, but no one says mazal tov at a funeral.”

But unlike death, it’s also a new beginning. One door closes, and another door opens.

Shabbat Zachor 5771: Can we forget Amalek?