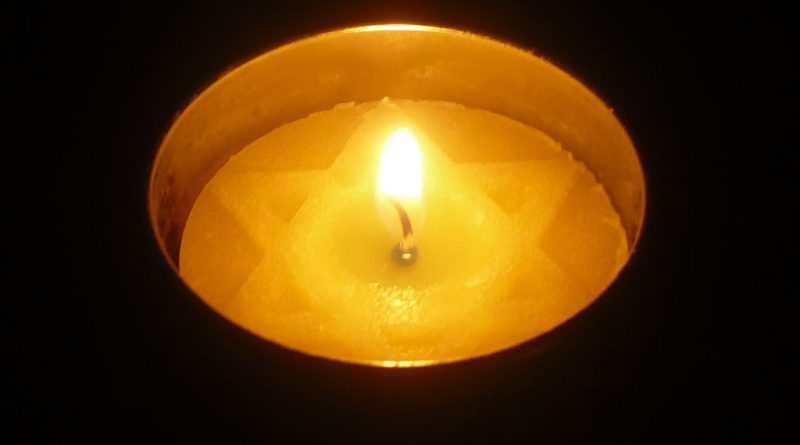 When confronted with unspeakable tragedy, words fail us.  Yesterday in the synagogue we read of how Aaron lost two sons in one day—a day that otherwise would have been a day of great triumph and joy.   The Torah tells us his reaction: vayidom Aharon, and Aaron was silent.

In the immediate aftermath of the Holocaust (Shoah, or “utter destruction” in Hebrew), there was a kind of silence.  Our people were too numb, too in shock, to try to make sense of the experience.  Six years after the shattered remnant was liberated from the death camps, the government of Israel passed a law establishing Yom HaShoah as a day of remembrance.  However, when I was in Hebrew school in the mid-1960s, we spent very little time talking about the Shoah.  Perhaps the reality of what happened was still so raw that people instinctively felt that young people should be protected from hearing of the depths to which humans could sink.

Now, sixty years later, that has changed.  Most major cities with a substantial Jewish population have a Holocaust museum. Despite a population of only 6,300 Jews, Birmingham has a Holocaust Education Center. Our children learn about the Shoah in Hebrew school, in Jewish day schools, and in secular schools.  About 15 years ago a group of scholars, rabbis, and survivors in Israel published Megillat HaShoah, the Shoah Scroll, a telling of the story of the Holocaust in a traditional Jewish form.

Megillat HaShoah opens with a description of how through centuries of exile “the monster of Jew hatred” would arise again and again.  The description continues: “What befell the people Israel in Nazi Europe, however, is beyond classification, and what confronted its sons and daughters defies description.  Untold numbers were forced out of their homes, torn from their families, trampled in the dust, worked to death.  Six million created in the divine image were strangled, cremated, shot, buried alive; they died of starvation, of thirst, and of the cold.  This time the monster stretched open its mouth beyond bounds, with a blood-curdling shriek and with stinking breath, and sought to eradicate everything.”

With the passage of time, when we gain the ability to speak of the unspeakable, the questions come.  “Where was God in the Holocaust?”  No answer satisfies.  The traditional responses to the question of suffering—that it is either punishment for sins, or an “affliction of love” that spares one suffering in the world to come—fail when confronting horror on the scale of the Holocaust.

Another response is to say that God was right there in Hell with us.  The prophet Isaiah proclaimed “m’lo kol ha’aretz k’vodo,” the whole world is full of His Glory.  Rebbe Nachman of Bretslav, a great Chasidic rebbe of the early 19th century said that God is found everywhere, even in the depths of the pit.  Survivors tell me they have trouble with this as a response to the question of where was God in the Shoah.  The problem many survivors have is they felt abandoned during those dark hours.

The philosopher Emil Fackenheim answers the question differently.  For Fackenheim, the State of Israel is collectively what every survivor is individually: “a No to the demons of Auschwitz, a Yes to Jewish survival and security.”  Fackenheim formulated the famous “614th commandment.”   “Jews are forbidden to give Hitler posthumous victories”  — we are forbidden to despair of the God of Israel, lest Judaism perish.  For Fackenheim, regardless of where God may have been, we are not allowed to give up on God.

The Israeli government itself has connected the Shoah and the founding of the State.  In the decision of the Knesset to establish the 27th of Nisan as The Day of the Shoah and Ghetto Revolt Remembrance Day, Mordecai Norouk, in the name of the House Committee of the Knesset said “perhaps by the merit of their blood spilled like water, we achieved a state and the beginning of redemption.”

But somehow tying together the Holocaust and the State of Israel—with the implication of suffering and reward—is also unsatisfying on many levels.  Who asked the six million—who asked us?—if it was worth the price?

Ultimately, we cannot ever answer the question of where was God in the Holocaust.  All we can do is to continue to struggle with the question—to wrestle with God.

Yom HaShoah needs to be more than just a time for remembering and honoring our dead and grappling with theological questions. It also needs to be a time to remind ourselves and the world of the need to have a conscience.  Hitler succeeded because millions of Germans accepted his demands for blind obedience.  Goerring said “I have no personal conscience; Adolf Hitler is my only conscience.”  If fewer Germans had relied on Hitler to be their conscience, there would have been no Shoah.  One of my teachers from rabbinical school, Dr. Zev Garber, says “The message of the Shoah for the generation after and for future generations is not survival alone.  There is something more important than survival, and that is preventing moral bankruptcy.”  As long as children anywhere in the world are being taught to be morally bankrupt, to blindly follow demagogues into the cesspool of hate, our children’s and grandchildren’s future is not secure.

We must teach our children to make the right decisions even when in difficult circumstances.  In his book Man’s Search for Meaning, Victor Frankl said “In the concentration camps, for example, in this living laboratory and on this testing ground, we watched and witnessed some of our comrades behave like swine while others behaved like saints.  Man has both potentialities within himself; which one is actualized depends on decisions but not on conditions.”  We must teach the children of the world that there are no excuses for evil.  You can’t blame it on the leaders or society – or claim that our enemies force us to make evil choices.  Each individual decides where he or she stands in the struggle between good and evil.  And the stakes are frighteningly high.  As Frankl put it, “Since Auschwitz we know what man is capable of.  And since Hiroshima we know what is at stake.”

Today we remember those who perished.  Megillat HaShoah says “For these do I weep, for infants who never learned to say “Mommy,” for boys and girls whose youth was stolen from them, who withered before coming to blossom; for young men and women who never were blessed beneath the wedding canopy, for the elderly denied the privilege of a gracious old age; for the orchestras and the music, and for all the world’s beauty whose rainbow of colors was lost, replaced by only brown and gray and black.  For all these do I weep.”

The Shoah was a time of great darkness. The Jewish response to darkness is not to sit in the dark and curse the darkness. It’s to cast light to dispel the darkness. We continue with our candlelighting ceremony.