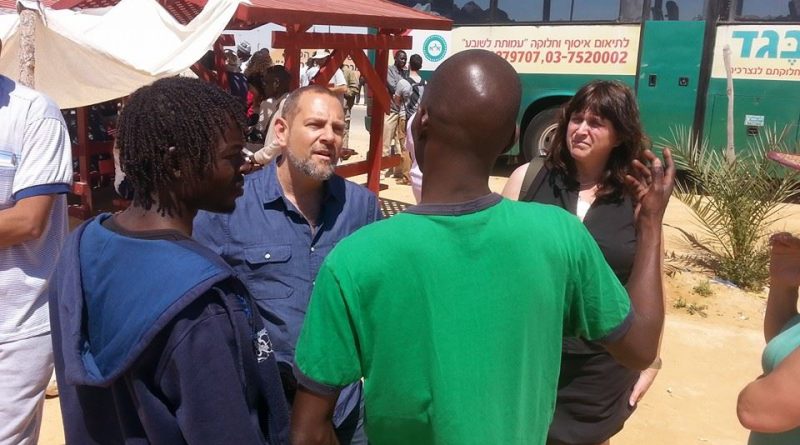 We have spent the last week celebrating the story of our escape from Egypt. How we were oppressed and abused, our infant sons living under a death decree. We managed to escape with our lives, leaving in such a hurry our bread didn’t have time to rise. All week we’ve been eating matzah and depriving ourselves of leavened pleasures (that beer and pizza is going to taste really good tonight!) to make sure we remember that miraculous escape from the violence and abuse of Egypt.

Times have certainly changed. Instead of being a people fleeing oppression, the Israelites are now the destination of choice for some people fleeing oppression themselves. There are about 38,000 African asylum seekers currently in Israel – 80% come from Eritrea, 20% from Sudan. Eritreans fled a harsh dictator and compulsory service in a military used for repression, service that can last 40 years. The Sudanese fled genocide in Darfur (remember Darfur?) and war between Sudan and South Sudan.

I’ve been to Holot, a detention center in the Negev desert for these refugees, and heard some of their stories first hand. They’re not in Israel simply because they dream of a minimum wage job in a country where they don’t speak the language and don’t fit in. They’re fleeing for their lives.

Israel has since built a fence on the Egyptian border in the Sinai which has been very effective in keeping more refugees out – but it doesn’t solve the issue of what to do with the ones that are here already.

The Israeli government has been struggling to figure out what to do with these refugees. It’s a hot political topic: residents of South Tel Aviv claim the Africans are responsible for a lot of crime in the area; the rhetoric on the right is to call them “infiltrators,” not “illegal immigrants,” or “asylum seekers.” Government ministers have said they can’t stay because they would “threaten the Jewish character of the state.”

The refugees have been living in a kind of limbo for years. The temporary visas they are given don’t allow them to work. The Israeli government, on the other hand, hasn’t been enforcing this, so they mostly can find work in places that don’t care about the fact that these people are in a kind of “limbo” – mostly menial jobs in restaurants, on construction sites, or in cleaning.

The government put forth a plan to give all these immigrants a choice: detention while awaiting a ruling on their refugee applications or accept “voluntary resettlement” in a third African country with a cash payment of a few thousand dollars. The voluntary resettlement has been going for a few years with a few takers – they were mostly sent to Rwanda, where they struggled, were unable to find work, and sent word back to their countrymen in Israel, “don’t come, you’re better off in an Israeli jail than here.”

In the course of 36 hours earlier this week, Israeli Prime Minister Benjamin Netanyahu went through an unbelievable 360 degree turn on the refugee issue. That’s right, not a 180 – a 360.

As an editorial in the right-leaning Jerusalem Post put it,

In his nearly 12 years in office, Prime Minister Benjamin Netanyahu has had his share of policy blunders and reversals. It comes with the turf. But few moves he has made have seemed more incomprehensible than his 360-degree turn on the African migrant issue.

Netanyahu’s policy had been as described above – they were on track to put in place a detention or deportation program.

There were large protests against this proposal. A few months ago, for parshat Mishpatim, I mentioned how my friend, Rabbi Susan Silverman, organized a network of people who were willing to house refugees and basically hide them. Holocaust survivors, El Al pilots, and many others protested the proposed detention or deportation plan.

On Tuesday, Netanyahu announced reaching a deal with the UNHC Refugees that other Western countries would take 16,000 refugees, and Israel would absorb 16,000 refugees.

Many of us were very pleased. Seems like a fair solution – Israel shouldn’t be expected to solve the problem all alone, just because we’re on the front line; but we should do something.

There was furious pushback from the right – they don’t want any “infiltrators” staying in Israel.

Tuesday night the plan was put “on hold.”

On Wednesday we had the second 180: Netanyahu flat out cancelled the deal. With no idea what will happen to the asylum seekers: Rwanda and Uganda have both denied any deal to accept refugees from Israel.

There are 11 million illegal immigrants in the US, 3.3% of the population. The vast majority are “economic migrants,” here for a better economic life, not because they are scared for their lives.

What about the other 55,000 illegal immigrants, the ones who are here for economic reasons, not seeking asylum reasons? They’re not Jewish – Jews can immigrate to Israel officially any time they want to. Why isn’t the government up in arms about them? Why do refugees from Africa threaten the Jewish character of the state, while non-Jewish illegal immigrants from the former Soviet Union don’t? The only possible explanation is racism. The immigrants from Russia are more like the majority. They’re white.

Israel does not have a big problem with illegal immigration. Israel does a stellar job of absorbing immigrants; absorbing an additional 16,000 would not be a problem at all. This year Israel is already absorbing 28,000 legal immigrants, Jews, from other countries. We have the infrastructure to handle absorbing a few more.

Not only that, absorbing them would help the Israeli economy – since things have gotten tense with the Palestinians, Israel has been importing labor from Thailand and the Philippines for the jobs Israelis don’t want. We wouldn’t need so many of these “guest workers” if we allowed the refugees to stay and work.

Every country has a right to have borders. Wealthier countries, such as America and Israel, can’t effectively absorb every “economic migrant” who wants to come here for a better life financially.

Jerusalem has been a walled city for thousands of years.  Security is certainly a valid concern.  The government is not only entitled, it is obligated to check the credentials of people who want to enter to attempt to ascertain that they are not a security threat.

But we also have an obligation not to turn a blind eye to people who are suffering.

One of the most fundamental messages of the Passover story is to be kind to strangers.  Over and over again in the Torah we are commanded “do not oppress the stranger, for you know what it is like to be a stranger.”  The Torah clearly forbids us from having blind prejudice against people who come from different places to dwell among us.

Jews, of all people, should be sympathetic to people coming to Israel fleeing oppression.

Last week’s Torah reading included God’s 13 attributes of mercy: El rachum v’chanun, “And the Lord passed by before him, and proclaimed, The Lord, The Lord God, merciful and gracious, long suffering, and abundant in goodness and truth, keeping mercy for thousands, forgiving iniquity and transgression and sin, and that will by no means clear the guilty.”

We sit and eat our matzah in the most comfortable exile the Jewish people have ever known.  Jews are now the wealthiest religious denomination in America.  This makes it more important than ever that we remember one of the fundamental lessons from the Passover story – we know what it is like to be a stranger.  We know what it is like to be oppressed.  Next week we mark Yom Hashoah, Holocaust Remembrance Day – only a generation ago was a dark period in history when many countries, including America, shut their doors to our brethren fleeing for their lives. Jews, of all people, should be sympathetic to those fleeing for their lives, regardless of the color of their skin – we are all created in God’s image, black, white, brown, Jew, Christian, Muslim, pagan, it doesn’t matter.

Israel does care what Jews in other parts of the world think – that’s one reason why Israel agreed to the deal in the first place. If you google “email Israel prime minister” you’ll be brought to a link that will let you send a message to Prime Minister Netanyahu. I encourage you to use that link to encourage him to honor the deal he previously made with the UN.

May God help us to walk in His ways of compassion, and may He strengthen the efforts of those who work to create a more compassionate and loving community, country, and world,

Is Snitching a Jewish Value??