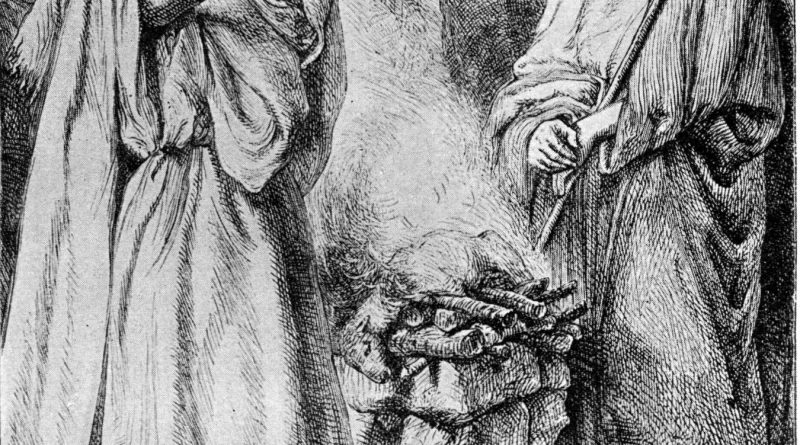 This week’s Torah portion, Tazria-Metzora, opens with a discussion of the ritual impurity connected with child-bearing.

After giving birth a woman is in a state of ritual impurity similar to what happens when she has her period. The Torah tells us,

On the completion of her period of purification, for either son or daughter, she shall bring to the priest, at the entrance of the Tent of Meeting, a lamb in its first year for a burnt offering, and a pigeon or a turtledove for a sin offering.

This seems to be a strange commandment. Why would a woman have to bring a sin offering after giving birth? What’s the sin?

Our rabbis wondered the same thing. They said the reason a woman has to bring a sin offering is because during the intense pain of childbirth a woman will vow not to ever again have sex with her husband, so she doesn’t have to go through giving birth again. But not long after that ordeal she loves her baby and still loves her husband, and doesn’t keep that vow, and that’s a sin, so she has to bring a sin offering.

There are a couple of messages we can draw from this.

When a person is confronted with having said or done something they later regret, the automatic response for many people is “I didn’t mean it.”

If someone had a little too much to drink, and then said something very hurtful to a spouse or a friend, when he or she sobers up they may try and blow it off by saying, “oh, I was just a little drunk, I didn’t mean it.”

But why would a person say something if they didn’t mean it? Our mouths don’t open by themselves. Anytime we say something there is some intention, some meaning behind those words. Instead of saying “I didn’t mean it,” it would be more accurate to say “I wish I hadn’t said those things. They don’t reflect how I feel now.” But they do reflect how you felt then. And that’s why the woman who gave birth has to bring that sin offering – she did mean those words she said just at the moment she said them. She later changed her mind, which is fine, but she meant it at the moment she said it.

This week’s Torah portion is often used as a starting point for a sermon on gossip, lashon hara, because the rabbis taught that the skin diseases cataloged in the latter part of our parsha were punishment for gossiping, as we saw Miriam was punished with this kind of affliction for gossiping about Moses. But the truth is there are many other forms of hurtful speech that can damage relationships or harm other people, and in many cases, people are completely clueless about the power of their words.

Taunting and verbal bullying are not gossip, but they’re definitely harmful speech, sinful speech. Sometimes a comment that is kind of “by the way,” casual, off-hand, not said with any forethought, can have a profound negative impact. Telling a sensitive young woman, “gee, you’re looking a little pudgy,” at the wrong time can lead to anorexia, a potentially life-threatening eating disorder. This isn’t theoretical: it really happens. We have to be careful with what we say.

There’s a midrash that highlights the power of words:

The king of Persia took ill and was advised by his doctors that he needed to drink the milk of a lioness in order to be cured. Someone volunteered to bring the king fresh lion’s milk; he asked for ten goats. He took the goats and traveled to where the lions hang out. On the first day, when he was sure that a lioness saw him clearly, he threw her a goat from far away. The next day he came closer… by the tenth day he had won her trust and managed to obtain a full jug of lion’s milk.

On his way back, the parts of his body had a major argument, each wanting to take credit for the great accomplishment. The legs said, “None of the other limbs can compare to us. If we hadn’t gotten the body to the lioness, nothing would have happened.” The hands argued that they were without parallel. If they hadn’t performed the various actions necessary, it would have been impossible to obtain the milk. The tongue argued that it was the most powerful, for if it hadn’t spoken up, they never would have gotten out on the mission in the first place.

All the other limbs were enraged at the tongue, “How do you even dare to make any claim? You’re hidden away in a dark, wet place, you can’t do anything at all on your own!” The tongue told them, “We’ll see who’s the master.”

When the man arrived back at the king, he opened his mouth, and said, “Your majesty, here’s the dog milk.” The king was enraged and ordered the man executed. As he was being led out the limbs were crying; the tongue said, “Didn’t I tell you that y’all are helpless? If I save you, will you acknowledge my superiority?” They all agreed.

The man spoke up. “Oh my king, pardon me, I suffer from aphasia, the wrong word came out. This really is the milk of a lioness, just try it, and you’ll be cured.” The king drank some of the milk, was cured, and the man was not only spared, he was rewarded. As it says in the Bible, in Proverbs, “death and life are in the hands of the tongue”!

In his speech, Brandon shared with us the idea that sometimes we can work on something and it’s messed up, and there’s no way to fix it, you just have to start over. Unfortunately, when it comes to our words, sometimes there’s no simply starting over. If you’ve said something hurtful, you can’t just “start over.” The damage has been done. You can apologize, you can try to right any wrongs, but the person who heard something hurtful from you cannot just forget those words and make it as if they were never said. Saying “I didn’t mean it” isn’t really going to mean anything. Words can cause irreparable damage.

But words also have the power to do great good. A kind word, a loving word, a word of support, a word of encouragement, can also mean a great deal, can be a lifeline to someone who’s struggling. It’s not only death that’s in the hands of the tongue; it’s also life.