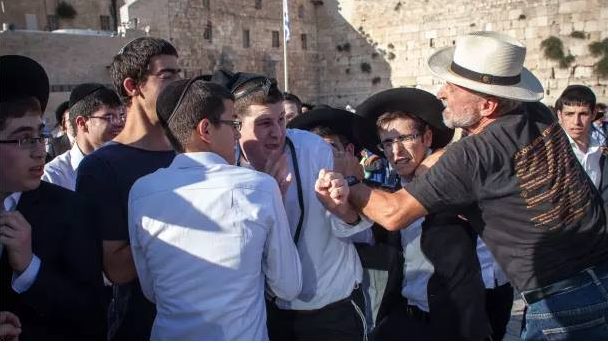 Note: the argument in the photo was at the Western Wall a few years ago, when some ultra-Orthodox men were threatening women trying to peacefully pray with Women of the Wall (including one of my daughters), and I came to their defense. No fisticuffs ensued: they backed off and left the women alone.

The governance crisis at the heart of this week’s parsha is a rebellion led by Korach, who gathered together 250 people, “chieftains of the community,” to challenge the leadership of Moses and Aaron:

The Torah tells us when Moses heard this, “he fell on his face.”

Moses argues that the rebels are greedy – not content with being Levites, they want the priesthood too. Moses frames it as a rebellion against God, not just Aaron – after all, God’s the one who appointed Aaron.

Korach and company complain that Moses brought them to the desert to die, not a land flowing with milk and honey, and he lords it over everyone.

The outcome of the argument is that the earth opens up and swallows up Korach and his merry band of followers.

I’m not sure that this week’s parsha has any valuable lessons on governance – after all, what’s the message here? Don’t rebel against someone who has God on his side?

But the Torah has a lot of useful messages on governance and leadership – I’d like to review a few this morning, and mention how the governance task force applied those teachings.

In the very same parsha that contains the first edition of the Ten Commandments, Yitro, we have history’s first recorded management consultant, Yitro, giving sound management advice to his son-in-law, Moses: a leader can’t do it alone, he or she needs help, and needs to delegate. Yitro sees that Moses is worn out, micromanaging everything. He tells Moses “what you’re doing isn’t good for you, and it’s not good for the people.” He gives some great advice:

You shall also seek out from among all the people capable men who fear God, trustworthy men who spurn ill-gotten gain. Set these over them as chiefs of thousands, hundreds, fifties, and tens,

From this we learn it’s important to select as leaders – your staff and board members – people who are capable and of integrity. And you then need to “right size” the way you are organized, just as our governance committee made recommendations regarding the right size of the board for the synagogue.

Another principle is that there must be complete transparency in financial matters. We learn this from a parsha near the end of the book of Exodus, Pekudei, where there is an accounting of everything that went into the building of the tabernacle and its furnishings. It doesn’t matter that Moses himself was in charge of everything; even Moses was subject to an audit to make sure there were no “financial irregularities.” Similarly, another one of the recommendations of the governance task force was that there be a periodic audit of the synagogue’s books. As President Ronald Reagan said, “trust, but verify.”

No matter how good your leaders are, there are going to be times when people are unhappy. The people need a mechanism to voice their complaints or concerns, and the leaders need to be in the custom of listening. In the Torah the people are able to complain directly to Moses – which they do, frequently, complaining about the food, the water, the harsh conditions. Moses listens – even when he feels incompetent to do anything himself, and he brings the complaints to someone who does have the power to fix things, God. Sometimes the people don’t like the way God addresses their problems and concerns, but that’s a different issue. The governance committee took care that especially when it came to hiring and retaining a senior rabbi, the voice of the congregation would be heard loud and clear.

We also learn from many examples in our tradition the importance of leaders being willing to speak truth to power. Abraham argued with God on behalf of the people of Sodom and Gomorrah; Moses argued with God on behalf of the Israelites. Pretty much all of our prophets were telling uncomfortable truths to people who didn’t necessarily want to listen – whether the common man or the king. The people who are chosen to serve on a board can’t just be a rubber stamp – they have a responsibility to speak up when they see something they think isn’t right.

You may be wondering, if speaking truth to power is a good thing, why were Korach and his followers punished? Weren’t they just bringing some valid complaints to the leadership? After all, what they say is true – everyone stood at Sinai, not just Moses and Aaron.

The rabbis teach us that the issue here is motivation. Korach and his followers weren’t motivated by wanting a more democratic system that would be good for everyone. They were motivated by greed: they coveted the glory that Moses and Aaron received as leaders, and they wanted the financial prerogatives including the “choice cuts” that went to the priests. They violated the tenth commandment, “do not covet.”

The Talmud holds the argument of Korach and his followers against Moses as a bad example, an argument that’s for a selfish purpose, not “l’shem shamayim,” for the sake of heaven. What’s an argument that is “l’shem shamayim?” The arguments between the schools of Hillel and Shammai, 2,000 years ago. They had the strongest of arguments with each other, at times even breaking out into violence, but the Talmud tells us the arguments were all for the sake of heaven. They weren’t motivated by greed or personal ambition. They were both honestly seeking what was best for the community and what was in line with the will of God.

And that was one of the things I learned when I first came to Temple Beth-El two years ago. There had been a rift in the community, some would even call it a rebellion. There was a lot of pain and hurt feelings on both sides.

For this week’s parsha two years ago, I spoke about Korach and his rebellion – and I said then:

I want to share an observation – in my two weeks here, I’ve spoken to a lot of people, on different sides of the various controversies that have rocked Temple Beth-El over the last year.

I do believe that all of the arguments are “l’shem shamayim.” Everyone I’ve spoken to is passionate about Temple Beth-El – including people who seem to be withdrawing from active involvement.

There are different opinions about what’s best for the shul. That’s OK, they are arguments “l’shem shamayim.”

As an outsider, and especially as an outsider here by intent for a limited period of time, I had no axe to grind in this argument. I was able to sit and listen to the different sides and the different perspectives, and what I discovered was that while there was harsh disagreement, in truth this was also an argument “l’shem shamayim.” The people on both sides of the chasm were motivated by a love of the community and a concern for doing what was right by the community.

And over time, I think everyone came to see that, and we’ve been able to heal the rift and bring the community back together.

If there is one thing I’d like to leave as a legacy for Temple Beth-El, it would be that in the future when disagreements come up – and note I said when disagreements come up, not if, because disagreements will surely come up – remember to give each other the benefit of the doubt. Listen to each other, and assume the person on the other side of the argument is motivated by the same thing you are – a desire for what’s best for the community. People of good will can, and often do, disagree on what’s best.

I’ll be here next Shabbat, but Rabbi Slater will be leading services – so this is my last d’var Torah as your rabbi. It’s been an honor and a privilege to serve your community these last two years, and I hope to connect with many of you again, either here, in Israel, on Facebook, or wherever our mutual paths might cross.

Life is not black and white 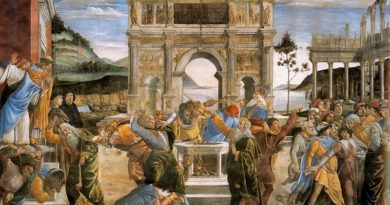