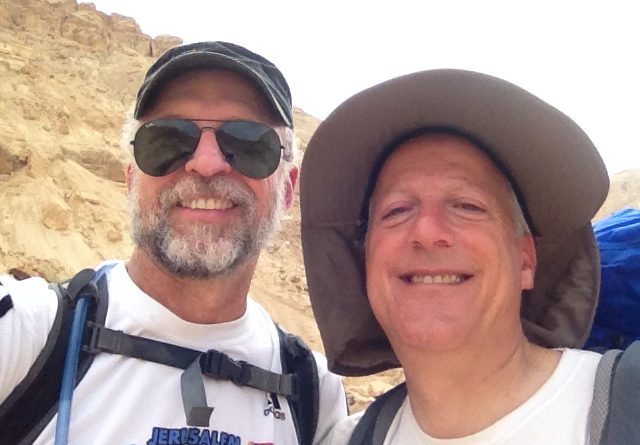 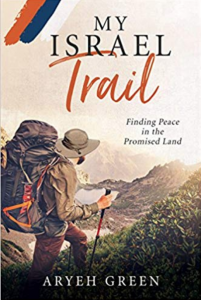 I enjoyed Aryeh Green’s book “My Israel Trail” for a very different reason than most readers of this brief review: I have so many personal connections to the things he wrote about it’s not even funny. I even get a mention in the book, as Aryeh and I met on the trail; given how many mutual friends and interests we have, it’s a surprise we hadn’t met before.

“My Israel Trail” is the latest entry in the genre of memoirs of long distance hiking as therapy. The most famous example, of course, is Cheryl Strayed’s “Wild,” a book that was part of my inspiration to hike the Israel Trail.

Aryeh’s inspiration for hiking the 600 mile + Israel Trail was to seek peace after his wife left him, leaving him both surprised and depressed. He had a need to “move on,” and what better way to move on than by literally moving? During the course of two months on the trail, he does find forgiveness and the start of healing from his pain. The book is part travelogue, part journal/memoir, and part “hasbara.” Hasbara is a Hebrew term for “explaining,” as in trying to explain misunderstood Israel to the rest of the world. For non-Israeli readers, those explanations may help them get a better understanding of some of the complexities of the Holy Land.

Aryeh’s hike was taken during a time of transition – from married to single, career changes, kids growing up, a lot going on. I just recently read his book, and I too am in transition, finished a job in Alabama, figuring out what comes next, where I’m going to live, etc. He has a great passage that describes that in-between space he was in on the trail, and that I’m in at the moment:

It may be obvious, and we don’t spend much time thinking about it (most of us), but each physical step we take has three distinct stages. First, our weight rests on our back foot. Then, we transfer the weight across/ahead and balance in-between. Finally, we rest our weight on our front foot. The first and last stages are well-defined, and stable. But the middle stage is transient, impossible to identify (when exactly does the weight cross over?), unstable. That shift is indefinite, frightening, ephemeral, un-knowable. I was transfixed by that middle, in-movement, undefined element. That was me, exactly: in the middle, unsure, imbalanced, in transition.

I was inspired to hike the Israel Trail just because it seemed such an awesome thing to do – walk the length of the country, from Lebanon to Egypt, through forests, deserts, and cities. And you really do get to know the country in a completely different way when you walk the length of it. Even long-term residents or natives find things that amaze and delight them, and I enjoyed discovering many of the places Aryeh mentions in his book, and a few different ones. Such a tiny country, yet so much scenery, so much history, so much to see. Aryeh’s book gives a great glimpse at many of the highlights.

Aryeh and I did the trail in very different ways. He spent two months on the trail with a full backpack. I did it over the course of two years, mostly as day hikes, half jogging half hiking with nothing but a daypack. I only had two sections where I had a full backpack and camped out on the trail overnight, both in the desert because there are sections where there are no roads close enough to be able to finish the segment as a day hike. I know how heavy a full pack is, so I have great respect for him doing the whole thing with a full pack. It’s a lot of work.

One of the things that impressed me on the sections I hiked through the desert with the full pack is how much solitude you can have. On one section I went about 30 hours and only saw one other human being, and that was somewhat from a distance. With five kids, I never had so much alone time before. Aryeh was a little more alone than he had hoped – he writes that he thought he’d get more friends to join him for a day or two. I was pretty lucky; one or more of my daughters joined me on probably ten days, and on my last day I had an “honor guard” of friends and family who escorted me. Joining me for a few days inspired one of my daughters, Katherine, to hike the entire trail. Aryeh did get to break up the solitude some by staying with friends on occasion, and having friends and family meet him for meals, etc., at different places along the trail. That’s one of the fun things about Israel: it’s a small country, so you’re never too terribly far away by car.

Aryeh did the trail in a way that makes sense weather-wise; hike from the far south in Eilat on the border with Egypt when the weather is cool, to the center of the country (Tel Aviv), and then take a bus to the far north and hike back to the center to finish the trail so that you’re in the north when everything is green and flowers are in full bloom. For me though there was something I found compelling about starting at one border and hiking in sequence all the way to the other border, so I started in the north on the border with Lebanon and kept going until reaching the border with Egypt. Aryeh also cut himself some slack and skipped a couple of small sections that were flat, boring, next to a road, or when he was exhausted. Maybe because I was doing it in sections, I felt compelled to make sure I walked every single step of the way. I had one section near Mitzpeh Ramon where the only way I could manage to do that meant I had to do an out and back of about 10km (6 miles) because the road was rough and I couldn’t get a ride back out. An Israeli acquaintance, Ziv, said “What are you crazy? Who cares?”

And that acquaintance was one of the many points of intersection between me and Aryeh. Ziv is the proprietor of the Rujum Winery in Mitzpeh Ramon, a winery mentioned in the book. I helped develop the Conservative Movement’s rules for certifying wine as “kosher,” and Rujum was a winery I worked with, certifying their wine (although for political reasons, since we’re not part of the Orthodox “establishment,” we’re not allowed to say the wine is “kosher,” we can only say it’s under the supervision of the Knesset Rabbanim, the association of Conservative rabbis in Israel). Haaretz did an article about it: “A Tiny Winery Takes on the Rabbinate’s Kosher Monopoly.”

We also have another wine connection – he mentions stopping at Jezreel Valley Winery at Kibbutz Hanaton and staying with the proprietor, Jacob; Jacob is also a friend and running buddy of mine, and as I was reading the section of Aryeh’s book where he talks about that stop I was staying with friends in Portola Valley, in the hills above Menlo Park where Aryeh grew up, and I shared a bottle of Jacob’s wine with my friends for Shabbat dinner.

Another “point of intersection” is Aryeh mentions the rabbi who officiated at his wedding, Mickey Rosen, z”l. Mickey was also one of my teachers; when I learned of his passing, I wrote some recollections of what I learned from him. Aryeh also recently went to work for my friend Yossi Abramowitz, Israel’s leading solar power pioneer. 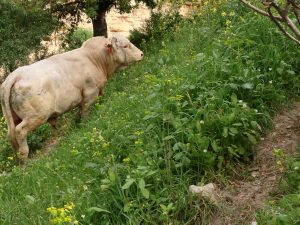 the same exact experience. For example, he mentions cows blocking the path in Nahal Amud in the Galilee. Those must be wild cows that have somehow escaped from their owners – they were blocking my path too!

I wrote a blog with my experiences on the trail, and really would like to write one good long article with the highlights I experienced. You can see the blog here.

Aryeh’s attention to detail sometimes seems a little too much – we get a detailed accounting of the “playlist” of songs he sang along much of the way. And he sometimes talks about humility in a way that doesn’t quite seem so humble (look how humble I am?). But that’s a built-in challenge if you want to talk about the personal importance of humility. I know I could be liable to the same criticism from some things I’ve written, so perhaps that’s why I noticed it. Still I enjoyed reading the book, I enjoyed meeting Aryeh on the trail, and now that I know from reading his book that he’s also a whisky drinker, look forward to sharing some “l’chaim’s” with him.

The five-part path he shares for growth and healing – humility, acceptance, gratitude, forgiveness, having a goal – makes great sense, and is good advice for anyone. 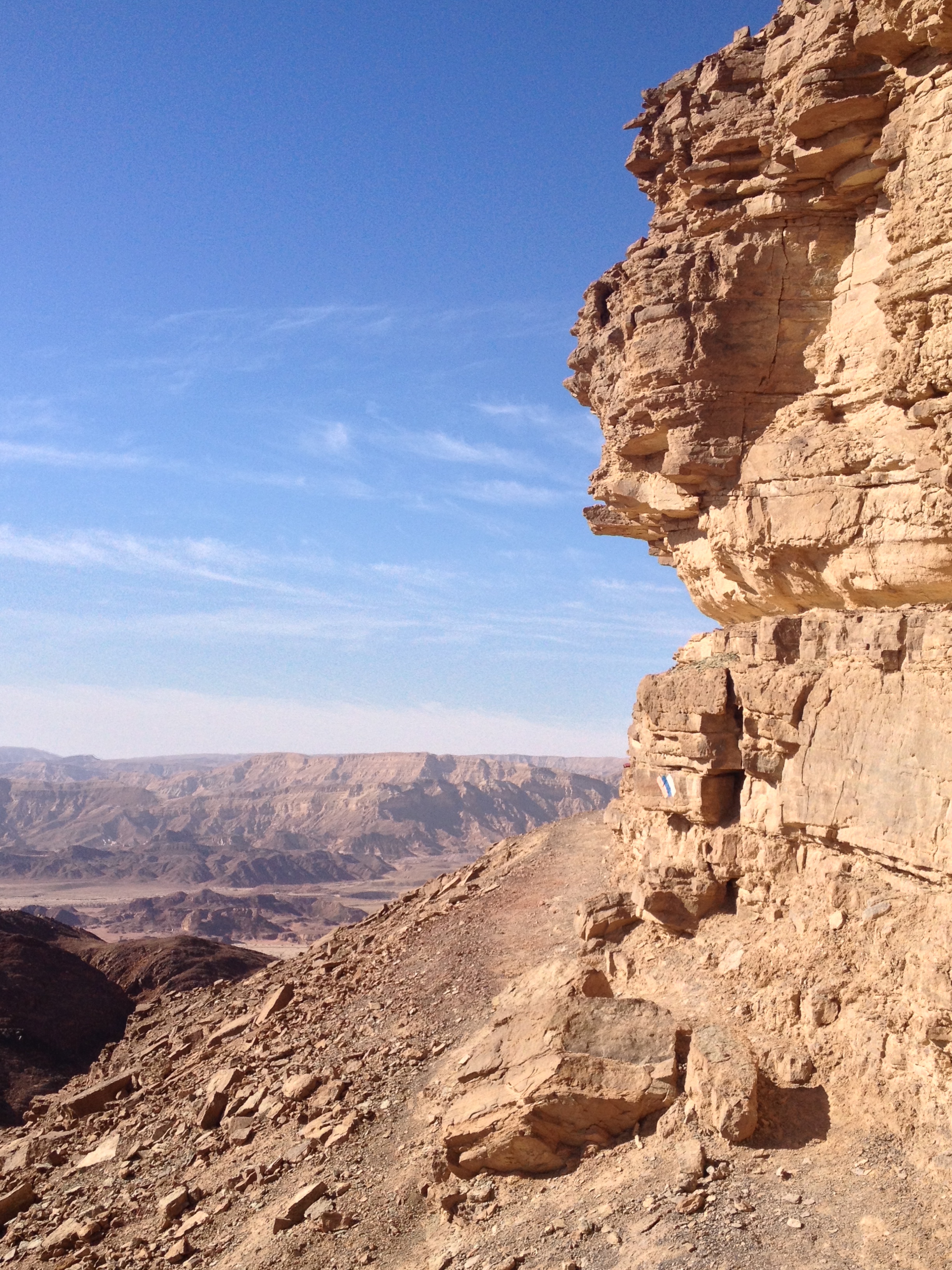