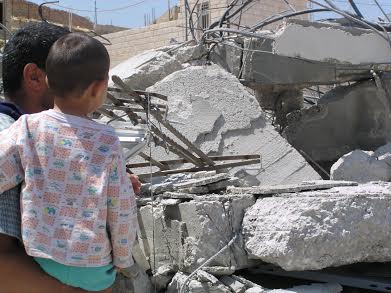 The Israeli government has a controversial policy of destroying the family homes of terrorists, which the government claims serves as a deterrent to more people becoming terrorists. Needless to say, this law is only applied against Palestinian terrorists, not against Jewish terrorists (such as the three young men who murdered and burned an Arab for terrorist reasons). According to Israeli NGO B’tselem, in 2018 nine Palestinian houses were demolished as a form of punishment, rendering 30 people homeless. This is a big reduction from the past; in 2003, at the height of the Second Intifada, 225 homes were destroyed and over 1,800 people were made homeless.

The policy does not appear to be effective. According to a reporton the Rabbis for Human Rights website (originally appeared in the Israeli newspaper Haaretz, quoting an internal IDF source,

An internal IDF study published at the end of 2003 summed up the first 1,000 days of fighting in the conflict: up until today, there is no proof of the deterrent effect of punitive home demolitions. The number of attacks, the report notes, even increased several months after the IDF began the demolitions. Major General (res.) Yitzhak Eitan, who served as OC Central Command in the first two years of the conflict, said a few months ago that the demolition has the opposite effect of what Israel intends. According to him, punitive demolitions encourage revenge attacks.

Human rights organizations claim the practice is illegal under international law, and is immoral, as a form of collective punishment.

Home demolition as a sort of punishment appears in this week’s Torah portion, Metzora. If a house has been afflicted with tzara’at– a condition often translated as “leprosy”that has nothing to do with Hansen’s Disease, the official name of the condition we know as leprosy – if other measures fail, the house was to be completely destroyed.

Tzara’atcan also afflict a person’s skin or clothes. It is universally understood by the rabbis as a kind of spiritual affliction, not as a physical disease. Tzara’atin the skin is not leprosy, and tzara’atin the house is not black mold. The rabbis specifically say that tzara’atis a punishment for violating one of seven different sins.

The rabbis in the Talmud (Sanhedrin 71a) also say, “There has never been, nor will there ever be, a house smitten with tzara’at.”

Maybe it’s because after putting the possibility in place, God realized it would be unjust. One person in a home sins, and everyone else in the home gets punished? But we’re taught in the Torah that the sins of the fathers are not to be placed on the children, and vice versa. Contrary to what was common practice in the ancient world, the Torah explicitly forbid punishing someone who was innocent for the sin of someone who was guilty.

Even if home demolitions were effective (evidence suggests they’re not) they are still immoral and contrary to Jewish values. Terrorists should be hunted down, arrested, and kept in jail. But rendering their families homeless is not a valid form of punishment.