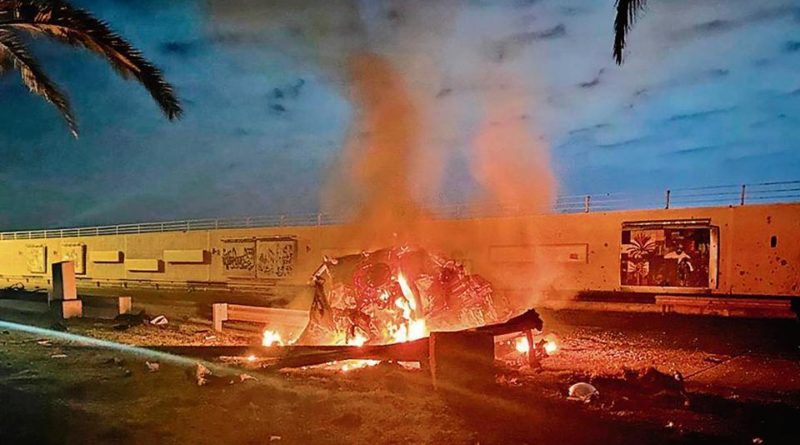 A little over a week ago the United States assassinated General Qassem Soleimani, a terrorist who was the leader of the Quds Force, Iran’s major military and clandestine operations force outside of Iran.

Not surprisingly, in today’s hyper-partisan world American opinions on the attack fall strongly on party lines: Democrats saying it was a bad move and wanting to rein in Trump, Republicans praising the President for his bold action.

Is there a Jewish take on this? What about the view from Israel?

There’s no doubt that Soleimani was a threat to both the US and Israel, especially Israel. Under his watch, Hezbollah was armed with thousands of precision missiles that can attack Israel with far greater power and accuracy than anything Hamas has in its arsenal. He provided crucial support to Syrian President Bassar Ashad that helped keep that dictator in power. As the architect of the support Iran provided Shiite militias in Iraq, he was responsible for the deaths of hundreds of Americans.

I’m not a lawyer, so I can’t speak to the legality of the assassination, but it was certainly justifiable morally. The Torah explicitly condones killing someone in self-defense. Exodus 22:1 tells us, “If a thief is caught tunneling into a home and is struck a fatal blow, there is no bloodguilt.” Based on this verse, the rabbis in the Talmud rule, “if someone comes to kill you, rise early and kill him first.”

Israel is not shy about applying this principle. In June 1967 when Arab forces were building up on Israel’s borders, Israel struck the crucial first blow, knocking out Egypt’s Air Force before they could take to the skies and attack Israel. Israel regularly targets “ticking bombs,” people planning an imminent attack.

But there’s a big difference between morally justified and strategically smart. I’m no expert on Middle East geopolitics. Despite having lived in Iran for a year, and working with their military in the days of the Shah, I make no claim to be an expert in Iranian strategy or where this is likely to lead. That’s a question for security experts. But there is no doubt this has created uncertainty and instability.

Opinions in Israel on the wisdom of the attack are mixed. Many people are worried about the possible fall-out. If there’s a major war with Iran, missiles will land on Tel Aviv and Beersheba, not on San Francisco and New York. An editorial in Haaretz says, “Israel can be satisfied that the man who led the Iranian campaign in the Middle East is gone. But it must remember that its challenge was not Solemaini, whom Israel could have taken out a number of times in the past, and that the ring of threats against it has not loosened with his death.”

The Jerusalem Post is more unabashedly positive about this development. Its editorial on the subject dismisses concerns of the possible risk of war: “What they ignore is the very high and escalating risk of war that existed under Soleimani, which the arch terrorist himself fostered.” The editorial says the decision to take out Soleimani was bold, and correct.

The uncertainty about the long-term impact is still with us. Within hours after Soleimani’s funeral, Iran launched a missile attack on US facilities in Iraq. No one was killed. If that’s the extent of Iran’s response, history would no doubt rule that it was a wise decision to take Soleimani out.

However, Iran also announced that it was no longer going to follow the restrictions from the nuclear agreement – it’s going to accelerate the production of enriched uranium, theoretically bringing the country closer to having the capability to build a nuclear weapon. The time may soon be here when Israel and the US will have to decide whether they can live with a nuclear Iran. If they can’t, there will be no choice but a massive strike against Iranian nuclear facilities, and it’s virtually guaranteed this would result in hundreds or thousands of missiles being targeted on major Israeli cities. Accurate missiles, not like the garage-built missiles coming from Gaza, or Saddam Hussein’s wildly inaccurate SCUD missiles from the Gulf War.

This week’s Torah portion shows us that our tradition counsels strategic caution. Jacob’s death bed blessings to his sons expresses disapproval for the deeds of Shimon and Levi:

Simeon and Levi are a pair; Their weapons are tools of lawlessness.

Let not my person be included in their council, Let not my being be counted in their assembly. For when angry they slay men, And when pleased they maim oxen.

Cursed be their anger so fierce, And their wrath so relentless. I will divide them in Jacob, Scatter them in Israel.

What did Shimon and Levi do that got their father so upset? A few weeks ago, we read the story of the rape of Jacob’s daughter Dinah by Shechem, a Canaanite. Jacob had been negotiating a settlement with the offenders when Shimon and Levi took matters into their own hands, and killed all the men in the town. Jacob was incensed. But why was he mad? Was it because what Shimon and Levi did wasn’t morally justifiable? No. He was mad because of the strategic implications. He told his sons:

You have troubled me, to make me odious unto the inhabitants of the land, even unto the Canaanites and the Perizzites; and, I being few in number, they will gather themselves together against me and smite me; and I shall be destroyed, I and my house.

In other words, even if what you did was morally justifiable, it wasn’t strategically smart. It could lead to our destruction.

It’s unfortunately that this is such a partisan issue. The wisdom of the Torah counsels a different attitude. I wish more Democrats could see that killing Soleimani was 100% justifiable morally, because he was an active terrorist and a threat. A knee-jerk response against anything President Trump does because he’s Trump is not appropriate. And I wish more Republicans could see that we shouldn’t be cheering too loudly, because it’s possible it wasn’t a strategically smart decision. Only time will tell.

May God grant the leaders of the two nations most dear to our hearts, America and Israel, the wisdom and courage to guide us successfully through a difficult and dangerous time,