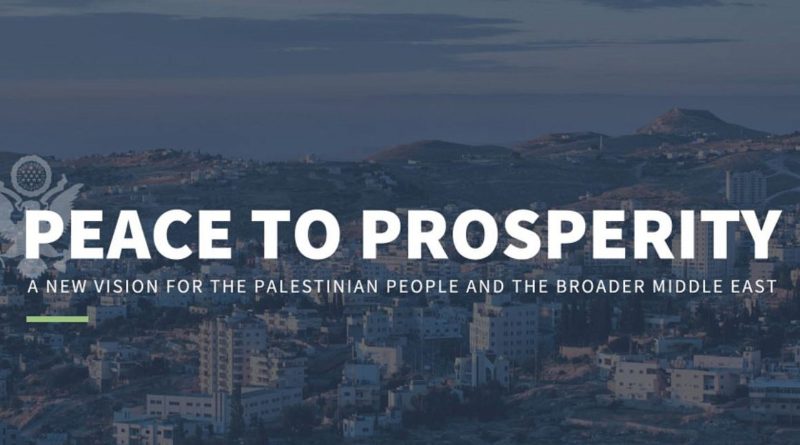 President Trump’s “Deal of the Century” is a plan that would vastly improve the daily lives of Palestinians while meeting the security needs of Israel. So why did Palestinian Authority President Mahmoud Abbas respond with “A thousand times no!”?

My goal this morning is to give you an understanding of what’s in the plan and what the likely impact of its release will be on Israel. Some of what I will share is fact; some is opinion, some mine, some from other people. I hope to share enough different viewpoints that you can form your own opinion. There’s no advocacy here – American Jews don’t have a say in any deals between Israel and Palestine, and even as an Israeli my influence is limited to which party I vote for, and peace plans are only one issue among many. But American or Israeli, as Jews we care deeply about Israel, and this peace plan may have important implications for the future of Israel.

In most respects, what’s in “Peace to Prosperity,” the official name for the Trump plan, is far less generous that what was in previous plans that the Palestinians rejected, including the Bill Clinton – Ehud Barack plan of 2000 and former Israeli Prime Minister Ehud Olmert’s plan of 2008.

There are four major issues to be negotiated in any peace deal between Israel and the Palestinians:

Olmert’s plan was very generous. I have not seen any limits Olmert’s plan would have placed on Palestinian sovereignty, other than a military. He offered to give the Palestinians 93.7% of the land in the West Bank. He would have offset the 6.3% Israel was keeping with 5.8% contiguous to the West Bank and a tunnel between Gaza and the West Bank. He offered to evacuate Israelis from the Jordan Valley, while keeping Israeli military control over the border with Jordan. Olmert offered to withdraw from the Arab neighborhoods in East Jerusalem and give those to Palestine, and he offered to put the Old City of Jerusalem under international control. It’s not clear to me that Olmert would have been able to sell Israelis on the deal. It’s a moot point – soon after that offer was put on the table, Olmert resigned as Prime Minister, after he’d been indicted on corruption charges. Abbas has said he was willing to keep negotiating with Olmert on the basis of that plan, but Netanyahu came to power, and that plan was dead.

Trump’s plan is very much in line with Israel’s security desires, and places many limits on Palestinian autonomy:

It’s clear that under the Trump plan, Palestinian sovereignty is limited, and is subject to ongoing Israeli approval. Palestine would be, as Netanyahu described it, something less than a state.

Unlike previous peace proposals, the Trump plan comes with a map of the territory set aside for Palestine. The map, however, is far less generous than the general concepts in earlier plans. Key features are:

Under the Trump plan, Jerusalem maintains its status as the undivided capital of Israel. Towns east of the security barrier, such as Abu Dis, may be joined together and called “Al Quds” (the Arabic term for Jerusalem) or some other name, and that city can be the capital of Palestine. Israel retains full control of the Old City, and the status of holy sites continues as it is now, except that Israeli Jews are allowed to pray on the Temple Mount.

Under Trump’s plan, no one gets dislocated; there will be some Jewish enclaves in Palestinian territory connected to Israel via special roads, and some Palestinian enclaves in Israeli territory connected to Palestine via special roads.  There are also a variety of economic incentives for the Palestinians to sweeten the deal including a free trade zone, investment in infrastructure (without saying who will pay for it), etc.

Reactions to the proposal (and I don’t think we should call it a deal – a deal implies something that’s been negotiated with the relevant parties) have been all over the map.

Some analysts think the plan has zero chance of success, and it’s strictly for domestic political consumption in the US and Israel. Others see the plan as a needed dose of reality into the negotiations – since the plan never would have been submitted without Netanyahu’s prior approval, we now have a guide as to what the current government of Israel would accept. Some think by putting such a one-sided plan on the table, the Palestinians will realize future deals might be even worse, and it will bring them to the table.

I’ll now share my views, but with humility. I’m not an Israeli diplomat or politician. I’m an American-Israel rabbi who has followed the peace process closely for 20 years now, since the time I lived in Israel during the start of the Second Intifada. I have a daughter who’ll be serving in the IDF next year, and I worry about what’s going to happen. But my crystal ball isn’t any clearer than anyone else’s. So take what I have to say with a grain of salt, and if your opinion is different, that’s 100% OK.

Reading the “Peace to Prosperity” document itself, the tone shows it was really written with American and Israeli audiences in mind. If it was truly intended to be a starting point for negotiations, substance aside, it would have used more diplomatic language. For example, there’s a line that says, “While the Palestinians have never had a state, they have a legitimate desire to rule over themselves…” It’s true, but it’s also a gratuitous dig. Why use that language? There’s also lots of language similar to the following:

There’s nothing in the document that talks about the historic wrongs that Palestinians have endured, such as the massacre at Deir Yassin, or forced expulsions from Israel in the War of Independence, confiscation of their property, or the harshness of the last 50 years of Israeli military rule.

They’re not going to come to the table that doesn’t even have a place set for them. Not without an invitation. Not when it’s clear the administration has no empathy left for their perspective, their people.

I believe President Trump may have started the process of working on this plan with good intentions, but after the Palestinians broke off relations with the United States after the move of the embassy to Jerusalem that changed. The document as is serves several domestic political purposes in Israel and in America but is unlikely to be a basis for negotiations with the Palestinians.

In Israel, I don’t think this plan will result in more seats for Netanyahu’s Likud party in the next election, but I think it’s had the effect of reducing Benny Gantz’s maneuvering room. Gantz has no choice but to come out in favor of this plan, lest he lose his right of center voters to Likud. Right of center voters in Israel love this plan – it gives them everything they want. By endorsing the plan, Gantz totally alienates the Arab parties, whose support would be needed to form a government without Netanyahu. So Gantz now has no alternative to a unity government after the next election, unless he figures out a way to get Liberman and the haredi parties to join together with him and the parties on the left, which seems very unlikely. In the US, the plan will help President Trump’s standing with evangelicals and right-leaning Jews, not that he needs any help there.

Unfortunately, I feel very pessimistic. I believe this plan will be used as an excuse for Israel to take unilateral steps, such as annexing the Jordan Valley and all major settlement blocs. I’m relieved that the US has put the brakes on that happening right away. I believe we will see an entrenching of the status quo – Palestinians living under Israeli military authority. Unilateral steps make a negotiated peace agreement in the future less likely.

Abbas will simply wait Trump out. He’ll hope that there will be a new president in the US after the elections in November, maybe someone more amenable to the Palestinian side – such as Bernie Sanders.

I don’t see much changing anytime in the near future. I fear what we will have is another decade or two of the status quo, and eventually the Palestinians will give up on aspirations to have a state of their own and will simply start campaigning to be made citizens of Israel. If an American administration less friendly to Israel comes to power, Israel could find itself increasingly isolated.

I believe Israel has a right to annex all of the West Bank and Gaza – we won the war in ’67 and the victors set the borders. But if we do that, we have to make the Palestinians full citizens of Israel. The Torah teaches us, “mishpat echad yiyeh l’chem,” you shall have one manner of law for both the citizen and the resident. I’d rather the Palestinians had a state of their own than that they become citizens of Israel. I want Israel to be Jewish and democratic; millions more Muslim voters could threaten the Jewish nature of the state. And to keep the land, but make the Palestinians second class citizens, which in effect is what the Trump plan does, is unjust, and the rest of the world would be unlikely to support it.

The negotiating technique used in the plan feels like the negotiating technique used by God in this week’s Torah portion, Bo. We’re in the middle of the Passover story, the ten plagues. God is clearly the more powerful party. After the final plague, the death of the first born, Pharaoh is broken, he gives God exactly what God wants, because he finally has to acknowledge that he’s powerless. The Trump peace plan feels much the same – the more powerful party dictating the terms to the weaker party. It’s an attempt to force the Palestinians to admit defeat and that they have to accept whatever the victors offer them, just as after World War II, the Allies imposed their terms on Germany and Japan. But it’s a different kind of war the Palestinians lost. You can’t crush their national aspirations with tanks and bombers. F16s don’t stop terrorists.

I hope I’m wrong. I hope Abbas decides to counter with something meaningful – the Saudi peace plan, for example, and say to Netanyahu, let’s work on bridging the differences. He should offer to sit down and negotiate with Netanyahu without preconditions. But I don’t see that happening.

And to be clear, I don’t place most of the blame for the current situation on Israel. I think the Palestinians made a terrible mistake in not accepting the plan that was put on the table by Bill Clinton and Ehud Barak in 2000, and for not immediately jumping on and accepting in principle the plan Ehud Olmert offered in 2008. I don’t think pressuring Israel alone would result in peace. The Palestinians will also need to be pressured for us find our way to peace.

Maybe we should close with a prayer for the messiah, because it feels like the only way we’ll ever have true peace in the Middle East is with the coming of the “anointed one.”

May God give the leaders of Israel and Palestine the vision, wisdom, courage, and good will to negotiate a just peace that allows the Palestinians to live in dignity and the Israelis to live in security,