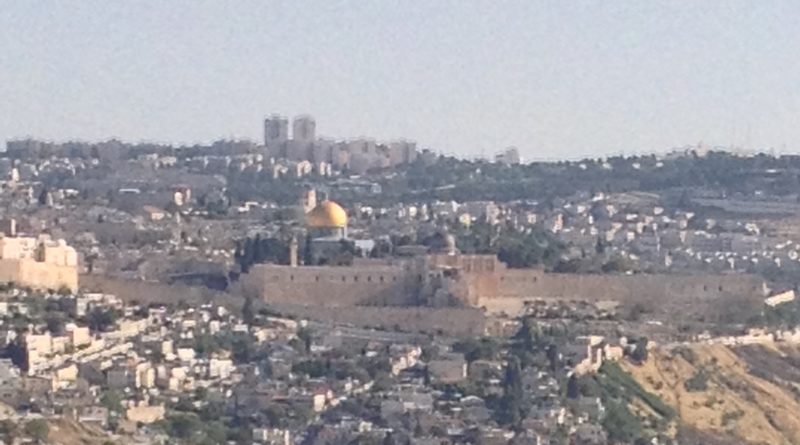 53 years ago yesterday on the Jewish calendar, on the 28th day of Iyar 5727, Jerusalem was liberated. That was June 7, 1967 on the secular calendar.

For the first time in 1,887 years, the Temple Mount and the Old City of Jerusalem, the holiest place in the world in the Jewish tradition, was under sovereign Jewish control.

It’s hard to overstate the importance of Jerusalem in the Jewish tradition. We break a glass at weddings as a reminder of the destruction of the Temple and Jerusalem. When someone has died, we comfort the mourners with the phrase, “May God comfort you among the other mourners for Zion and Jerusalem.” In the weekday Amidah, which the observant Jew says three times a day, we pray for God to return to Jerusalem. We have a prayer for Jerusalem in the birkat hamazon, the grace after meals. The betrothal contract of R. Levi of Berdichev (18th c.) stated,

It was an amazing day and an amazing victory. No longer would residents of the Mamilla neighborhood of Jerusalem live in fear of Jordanian snipers on the walls of the Old City. After 19 years during which Jews could not go to the Western Wall to pray and all Jews were expelled from the Old City by the Jordanians, we could return to the ancient city of our dreams.

Naturally, you’d think that this day should be a joyous holiday. I took an informal survey of my friends on Facebook, a simple question: How do you feel about Yom Yerushalayim? My American friends mostly responded enthusiastically: “I’m into it!” “Listened to Azi Schwartz sing Yerushalayim Shel Zahav” “Love it!”

Typical of the responses from my Israeli friends (and American rabbi friends who have lived in Israel for months or more) is this: “I have problems with the way right-wing Orthodoxy has taken it over (or we handed it over).” Or as someone put it somewhat more bluntly: “You mean the aggressive parade of hawkish right-wing thugs through Arab neighborhoods? Sort of like what happened in Charlottesville, except on an annual basis.”

What happened? And why should you care?

Jerusalem Day was proclaimed a new holiday in time for its first anniversary. In 1998, during Netanyahu’s first tenure as Prime Minister, it was declared a national holiday, meaning everyone in the country has the right to take the day off.

The biggest, most public, and most controversial celebration of Jerusalem Day has become the March of Flags. Tens of thousands of Jews, at least hundreds if not thousands of them “ultranationalists,” the Israeli equivalent of white supremacists, march through the Muslim quarter of the Old City on their way to the Western Wall. The young hotheads in the group chant slogans such as, “Death to Arabs,” and “Kahane was right.” What does “Kahane was right?” mean?

Meir Kahane was the founder of the Jewish Defense League and the overtly racist Kach political party in Israel. He wrote a book titled, “They Must Go,” and argued that all non-Jews should be expelled from the state of Israel. In 1985 the Knesset passed a law, that was upheld by the Supreme Court, banning racists and inciters from running for the Knesset, which resulted in the ouster of the Kach party.

It’s not enough that they chant their racist slogans. Youth in “religious” dress, with big kippahs and tzitzit hanging out, set trash cans on fire, attack Arab shops and shopkeepers, and otherwise attempt to terrorize the local non-Jewish population.

Many of us see the normal route of the March of Flags as intentionally and unnecessarily provocative, even if the marchers were all peaceful and well-behaved, which they never are.

The march’s route normally goes through Damascus Gate, in Arab East Jerusalem. If you visit the area around Damascus Gate, you might think you were in Jordan – the signs on shops are in Arabic and English, with only occasional Hebrew. Jews pretty much never go to Sheikh Jarrah, the neighborhood right outside the gate. I’m an exception, I’ve been there a number of times taking my kids to meetings of Kids for Peace, and occasionally to go shopping because you can get some great deals on appliances imported from Turkey. The residents of the Muslim Quarter and the area around Damascus Gate are mostly not Israeli citizens. They, or their ancestors, were living there in 1967, when it was part of Jordan that was conquered by Israel during the Six Day War. They are official residents of Jerusalem, they have freedom of movement throughout Israel, they can, but mostly don’t, vote in municipal elections although they can’t vote in national elections. Many of them still hope that East Jerusalem will become the capital of a Palestinian state.

The route of the march serves a political purpose: the leaders want to convey the message that “Jerusalem is the eternal undivided capital of the Jewish state.”

The local residents, and many Jews, disagree with that perspective. To be clear, when the right-wing governments say Jerusalem must not be divided again, they’re not only talking about the Old City: they’re talking about all the Arab neighborhoods in East Jerusalem outside the city walls as well, including many that never were part of historic Jerusalem. They want more land and hope to displace the Arab residents with Jewish ones. Many Israelis believe Jerusalem SHOULD be divided. I think Israel should keep the Old City but divide the rest.

One reason I feel that way is demographic. This week’s Torah portion, Bamidbar, calls for a census of the people – the implicit message being that “numbers are important.” I still believe in the two-state solution, because the alternative is a one-state solution and I don’t think that one state would be Jewish forever. Therefore, to me it makes more sense to have those 300,000 Muslim voters be part of a Palestinian state, not the Jewish state.

In 2015 Ir Amim and Tag Meir, two liberal Israeli groups, filed a petition with Israel’s Supreme Court claiming that marches in the past had been so violent and provocative that the route should be changed. They claimed there was enough violence to justify the high standard for limiting the rights of people to march in a particular area.

The court rejected the petition, and permitted the march on the original route, with the proviso that police should immediately arrest anyone who shouts, “death to Arabs.”

Since then every year it’s the same story. There’s more or less violence. The police do a better or worse job at keeping the violence at bay. Last year there was violence when Jews went up on the Temple Mount on Jerusalem Day, which coincided with the closing days of Ramadan, when there are a lot of Muslims worshipping there. Last year it was the Palestinians who rioted, throwing rocks and chairs at Israeli security forces. This year it was quiet because there was no parade through the Muslim Quarter due to the coronavirus.

The association of Yom Yerushalayim with ultranationalists – and the fear that such sentiments will eventually lead to a single state – explains this comment from Lev:

I have a unique and very special relationship with Jerusalem… I cry each time I enter the city, I recall the exuberant sensation of completing the masa kumta (final forced march, a test) for the paratroopers at the Kotel. Yet, the result of the six day war and the capture of the city and the territories has brought with it a virus that lacks a vaccine and may bring about the death of my vision of the modern state of Israel.

What the march has devolved to is the antithesis of the vision of the Israeli Declaration of Independence, a state that is Jewish AND democratic, that respects the rights of all of its citizens.

Because of that, many of us feel as my friend Geoff does –

So what are we liberal Zionists to do? Ignore the day because of what it’s come to symbolize? Or somehow try to reclaim it? My friend Charlie wrote,

While I don’t like the right’s takeover of the day as stated above, there are three reasons I love this day: (1) I celebrate that we have access to all of Jerusalem, especially the old city, (2) I have the right and privilege to live in Jerusalem, to own a business founded in Jerusalem, to have three children born in Jerusalem, And (3) in response to some of the comments above, the left can moderate what Yom Yerushalayim means, but not if we concede and let the right take it over as theirs with only their narrative.

I agree with Charlie. Those of us who are aligned with a more liberal vision of Zionism should not concede and just give up on the holiday. We need to make sure our vision of Yom Yerushalayim is heard.

Why should you care? Why did I feel it’s important for American Jews to understand what Jerusalem Day is like in Israel? Why not let you celebrate it here in blissful ignorance?

It’s because American Jews do have a stake in Israel. Jews are all part of one great big, often dysfunctional, spiritual family. It’s important for American Jews to understand what Israel is really like, both the beauty and the warts, and it’s important for Israeli Jews to understand Jews and Judaism in the diaspora. As the Talmudic saying goes, “col Yisrael aravin zeh b’zeh,” all Israel is responsible for each other.

Jerusalem may be physically united, but it’s divided politically and spiritually. I’d like to close with a prayer for Jerusalem that I wrote back in 2013, when my heart was aching from hate and violence sown on what should be a beautiful holiday.

Ribono shel olam, Master of the Universe
God of Abraham, God of Isaac, God of Jacob
God of Jesus
God of Mohamed
Help us find the teachings of love in your Torah, your Bible, your Koran
Give us compassion and understanding
Show us how to live in peace, each according to his or her custom
Grant us the wisdom to know how to share our holy places – we all want to honor and praise you
Bring our leaders to the path of righteousness, caring for all, responsible for all the holy city’s residents
Bring us peace
True peace
May Jerusalem truly be Ir Shalem, a city whole, not divided by hatred, the true City of Peace

A Prayer for Yom Yerushalayim