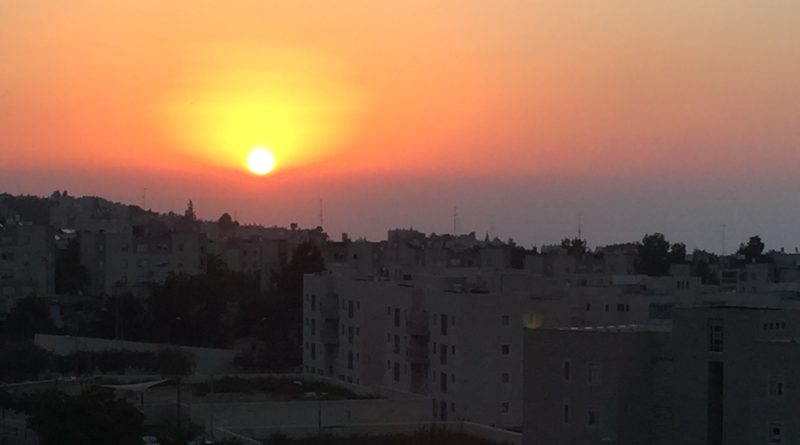 Speak to Aaron and say to him, “When you mount the lamps, let the seven lamps give light at the front of the lampstand.”

The rabbis ask, “why does this verse, the commandment to light the menorah, come right after all of the offerings that the 12 tribes brought for the inauguration of the tabernacle?” (at the end of last week’s parsha)

According to the midrash, Aaron saw that all of the tribes other than his tribe, Levi brought sacrifices; yet the tribe of Levi didn’t bring any. Aaron said to himself, “Oy, it was because of me the tribe of Levi wasn’t accepted by God (because of that episode with the Golden Calf).” God overheard, and told Moses, “You go to tell Aaron, don’t worry, you’re destined for greater things than this, for the sacrifices are only for the time when the Temple is standing, but these lights eternally provide light for the menorah.”

The rabbis object – but wait a minute, if the Temple isn’t functioning, there’s no menorah either! Midrash Tanchuma explains that when the Temple was destroyed, the menorah was hidden away, and its light is eternal.

But how can that be?

God saw that in the future there would be wicked people who are not suitable for this holy supernal light, so God hid it away for the righteous. This is known as haohr haganuz, the hidden light.

We need that light, but God also wants the light. Another midrash says when the Jews were given the commandment to kindle the Menorah in the Temple (Bamidbar 8:2), they asked God why He told them to light up for Him Who is the Light of the whole world. God said to them, “You’re right. I don’t need your light. But I want to give you an opportunity to light for Me like I have lit for you.”

Doing a mitzvah is like lighting a candle before God — it is preparing a place where God’s glorious presence can dwell. By means of this you enliven your soul, the candle… The more light a person brings about in the physical darkness, through doing the mitzvot, the more that one will enlighten one’s soul from the light above.

One of the most important commandments is to love your neighbor as yourself. When we act compassionately and justly, we are bringing some of that light hidden for the righteous out into the world, to benefit both ourselves and God.

Last week I spoke about some of the terrible things that have been happening in our country around race relations. But something remarkable is also happening. People’s hearts are opening up. Light is being revealed. There have been many other unarmed black men who have been killed by police, but something seems different this time. George Floyd is having more of an impact than previous travesties of justice have had.

Some concrete changes are already happening.

In Minneapolis, where Floyd was murdered, the city has agreed to a restraining order from the state forcing immediate policing reforms, including banning the use of chokeholds and requiring any officers who witness the use of excessive force to intervene and report it.

New York state repealed a law that kept police disciplinary records hidden from the public. Under that law if a police officer was involved in a violent incident, the public had no way to find out whether that officer had previously had any problems with excessive use of force.

The sponsor of the bill, New York state senator Jamaal Bailey from the Bronx said,

The silver lining on this incredibly dark cloud is that the sun is finally starting to shine on injustice. Maybe it’s the unmistakable, and in my opinion indisputable, video evidence that we saw a live murder on TV, but it’s done something to the consciousness of America. I don’t know if there could be a more meaningful piece of legislation for me and this body because it’s way more than just policy.

There are calls to “defund the police.” Those calls need to be rebranded. I have to admit, when I first heard those calls, I thought “what a horrible idea.” Different people mean different things by defund police – many cities across the country, including Los Angeles and New York, are looking at moving some money from police budgets to social services budgets – to try and reduce the number of people who turn to crime. An ounce of prevention is worth a pound of cure. That might not be such a horrible idea.

Police are being held accountable for violence against citizens, regardless of race (yes, white people can also be victims of police violence). Two cops in Buffalo have been charged with felony assault for pushing a 75-year-old demonstrator. An NYPD cop was charged with assault, menacing, and harassment for shoving a woman to the ground during a demonstration. Four police officers in Atlanta have been fired for dragging two students from their car and shooting them with stun guns when they were stuck in traffic from a demonstration.

Congress is hearing testimony and considering legislation on police reform.

Facial identification software does not do as good a job with faces of minorities as it does with white faces. Microsoft, IBM, and Amazon have put a moratorium on the use of their facial identification software by police departments. It’s interesting to note that this is happening at a time when because of the coronavirus many people are wearing masks, effectively disabling the facial recognition software. I’m sure anyone with a phone that relies on facial recognition to open has noticed, as I have, that it doesn’t work when you’re wearing a mask.

Many police officers across the country who were policing demonstrations have taken a knee to show their support for George Floyd. There’s a beautiful video of a demonstrator asking Portland police decked out in riot gear if they would take a knee to show their support for black lives. They all did – a row of cops in riot gear, taking a knee, and demonstrators coming over and shaking their hands and thanking them. Now we shouldn’t be shaking hands during a pandemic, but this is really what we need – handshakes instead of chokeholds. Police letting citizens know they are there to protect them, not intimidate them.

Israel also has had problems with police violence against minorities, and in Israel too there have been points of light. An autistic Palestinian man was killed by an Israeli border police cop, despite having been told the man was mentally disabled and not a terrorist. Prime Minister Netanyahu has said the killing was a tragedy and unjustified – that acknowledgement alone, instead of a cover-up, is a point of light. A former chief rabbi of Israel paid a condolence call to the grieving family – which is another point of light.

For me personally, it’s sparked conversations that probably should have happened long ago. Our Jewish Black Clergy group that Rabbi Rosenbaum organized that has been meeting for the past year, has been hearing the testimony of some of our black colleagues, and what we are hearing is shocking. It’s one thing to read about race problems, or to see something in a video. But having someone you know give testimony, “this happened to me” is far more powerful. But as Jews we know that – that’s why we’ve made such an effort to have Holocaust survivors speak to us and our children. There’s nothing more powerful than first person testimony, and many white people, such as myself, are hearing that testimony for the time, which I pray brings more than just awareness for the white listener, but may it bring healing for the black talker.

Yesterday I went to the Black Lives Matter Silent March together with other rabbis and black pastors. It was the quietest, most peaceful, most orderly demonstration I’ve ever been to. Everyone was wearing masks. People followed directions. Given Seattle’s demographics, it’s not surprising there were more white people than black people there, but that too is a powerful statement – and it’s a source of light. We recognize that racism doesn’t only harm black people, it harms all of us.

Light is ephemeral but very powerful. One small candle in a dark room can make it possible to see. Even though there is a lot of darkness in the world, with what it feels like is one disaster after another, there is also a lot of light being strewn in the way we are responding to these crises.

I truly believe we could be living through something akin to what the rabbis call “the birthpangs of the Messiah.” A difficult time, similar to the pains of labor, leading to a much better time. George Floyd’s unnecessary death will not have been in vain if it serves as a stimulus to creating a better, fairer, and more just society for all of our citizens.

May God help us to open our eyes to see what’s going on, our ears to hear the cries and stories of our black brothers and sisters, and our hearts so that we will be resolved to continue the holy work of bringing light into the world,