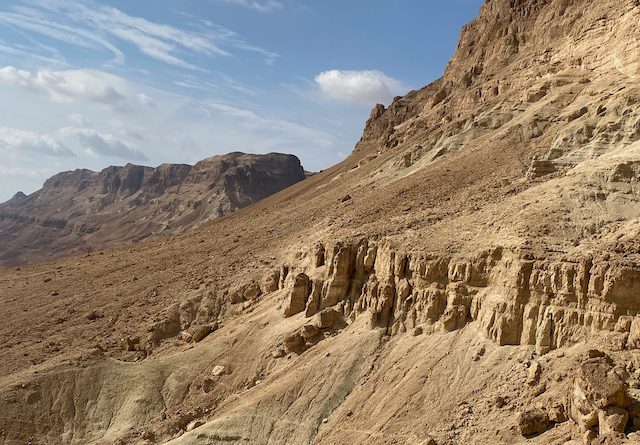 “The further you go into the desert, the closer you get to God.”

If you’re seeking time alone – or time alone with God if you’re religiously inclined – there’s no place like the desert.

I recently found myself feeling a little down. Don’t really know why. Life is generally pretty good for me. I have love, family, friends, interesting and at least some of it meaningful work that most of the time manages to cover my bills, health, not just one place to live, but two (both near deserts, one in Israel, one in New Mexico). I don’t know whether it was just some of the minor frustrations we all have that got me down, or just some kind of random hormonal fluctuation, but I was feeling blah.

I decided I needed a “mental health day,” and for me there’s almost nothing better for my mental health than a little time alone doing a strenuous hike in the desert, a place where long range vistas can give you a view in the opposite direction, inwards, into your soul.

I woke up early, had a quick cup of coffee, wolfed down a quick bowl of muesli, packed up some supplies and was on the road to the Dead Sea before 7am.

I got to Ein Gedi National Park a little after 8. When I got to the entrance station, I chatted with the ranger about hiking options. I have done most of the closer in “easy” hikes already, I wanted something longer and harder. He seemed a little skeptical, maybe because of all the gray hair. I said I run marathons, I’m up for a challenge (well, it’s been a while since I’ve run a full marathon, but I do still run half marathons, close enough). I picked a route, and he asked me, “how much water do you have?” “4 liters.” “Not enough, I don’t care if you run marathons, water is water, you need to have 5 liters on this loop.” I had another bottle of water in the car, so I went back to the car and collected it, and was on my way. As I passed the entrance station the second time, he told me I have to check out with the entrance station on the other end when I leave, for the longer treks they keep track of hikers. I found that reassuring since I was hiking alone.

Equipped with 5 liters of water, snacks, a paper map, and a smartphone with GPS I felt reasonably well prepared for the 10km hike. There was a section labeled “very difficult,” but how difficult could it be? I asked myself. I found out how difficult.

The lower part of Ein Gedi is very popular. You can see lots of wildlife, especially ibex and hyrax. The trail is pretty easy, paved part of the way, and when it climbs there are stairs carved into the rock and handrails to hold on to. You’re near water, you walk through a tunnel made through dense reeds growing in the oasis created by the Ein Gedi spring, and walk past a pool and waterfall that’s a very popular destination for families.

This isn’t the desert. This is Disneyland. It’s outdoors, it’s tame, it’s pretty, and there are lots of people around. Don’t get me wrong, it’s a nice spot, but it’s not yet the desert.

After about half an hour of easy hiking you leave most of the tourists behind at Nahal David and the waterfall. Another half hour of hiking and you pass Ein Gedi spring, and THEN you finally start to get into the real desert, away from people, barren, desolate, pretty much nothing but rocks and sky.

This was one my favorite parts of the day. A steady climb up a moderate incline through the desert. Not really alone with my thoughts, because keeping track of the trail and paying attention to where you’re putting your feet really occupies a pretty high percentage of the brain, not leaving a lot leftover for thinking of anything but where you’re going.

But there’s something highly meditative in that experience. So highly focused it shuts down most of the verbal babbling that goes on in our heads, just paying attention to the trail, the trail markers, feeling alive and aware of the effort my body is making and feeling the growing heat as the day warms up.

I think one of the reasons I was feeling a little down is I was feeling a little old. I’m about to mark my 66th birthday, and while I’m in great shape, there’s no denying that my physical self is not the same as it was 20 or 30 years ago. There’s a great line from a country and western song by Toby Keith I like that came to mind, “I ain’t as good as I once was, but I’m as good once as I ever was.”

But I didn’t feel at all old as I was pushing myself up that mountain. I’m sure if you got out a stopwatch and timed my ascent it would have been slower than if I’d done the same ascent 20 years ago, but I wasn’t timing it, and it didn’t feel any different. I felt as strong, and just kept putting one foot in front of the other.

The climb was challenging, but not crazily so. Every so often I’d remember to pause, look up, appreciate the view of the Dead Sea receding as I climbed higher and higher, looking up at the peaks toward my goal, the top of the ridge. When I came to a spring and poured water over my head and washed my face it felt refreshing in a way that only water in the desert can feel.

After two miles – and a couple of hours – of hiking I came to the top of the 1,700’ climb at the Ein Gedi Lookout. My actual altitude, however, was only 500’ above sea level – my starting point, at 1200 feet below sea level, was near the lowest point on earth.

I took a break, taking in the quiet, enjoying the solitude, sucking down a gel pack, eating a date, and taking deep draughts of my water. I really had started feeling better as soon I started the ascent away from the crowds. Now I felt I had accomplished my goal, my mental health was much improved, I felt at peace, as peaceful as the amazing view of the visitor center below, the Dead Sea, and the mountains of Jordan across the water.

The next part of the hike took me along the ridge, a bit inland so that for much of it I couldn’t even see the Dead Sea. It was fairly flat, mostly along a dirt road, so I alternated jogging and walking until I got to the top of the Bnei Hamoshavim ascent.

The trail guide listed the Bnei Hamoshavim ascent as “very difficult,” but I find those rankings are often somewhat overrated. I haven’t been on that many trails in Israel that I would rate as “very difficult.”

Turns out Bnei Hamoshovim actually was a very difficult trail, one of the tougher trails I’ve done in Israel. Or anywhere. It was VERY steep, very rocky, a lot of loose gravel. Much of the way down I was in “four-wheel drive” mode, using my hands as well as my feet to avoid plunging to my death or damage down the steep incline. Going slowly, step by step, it didn’t feel too dangerous, but it was certainly strenuous, and as the time was getting past noon the temperatures were warming up, I was sweating and getting pretty tired.

Even though I was hot and tired and hungry, it looked only a short detour to the “Hidden Waterfall.” I decided to take the detour to check it out, and assumed I’d at least be able to cool off.

The waterfall is in Wadi Arugot, which I discovered is a popular place for school outings – there were several large groups of kids on field trips walking through the stream. I didn’t care for the crowds and the noise, but the water felt amazingly refreshing, and after a few minutes the school group departed and I had the beautiful place mostly to myself. After getting refreshed from splashing around in the shallow stream with cool water, and continued my journey down Wadi Arugot and back towards my car.

This whole section is easy – gentle incline, a few rocky spots, but nothing really difficult. And yet it’s the place where I took a tumble trying to get around a bunch of school kids. I sat and caught my breath. Didn’t seem to have any major damage, a few bruises and scrapes. I continued the 2km to my car, my ankle feeling a little sore, but not terrible. Took a peek around an ancient synagogue I passed.

When I got up to walk back to the car, the pain in my ankle was intense. I could barely manage to walk to the car. I limped my way to the car, and drove back to Jerusalem, heading directly to an urgent care facility.

They took an x-ray and the doctor thought it was broken. He put my leg in a half cast and told me to see an orthopedist.

It turns out it was just a sprain, and not even a really bad one – I was comfortably walking on it again a few days later.

But the experience did leave me wondering whether hiking difficult trails in the desert alone is such a good idea. If that fall had happened earlier – on the very difficult section – it could have been a disaster, especially if my ankle hurt immediately. If I didn’t have cell phone coverage it could have been an even worse disaster, I would have probably spent a night on the mountain, and I was not dressed or equipped with enough food and water for that.

But maybe the danger is part of what makes the desert such a spiritual place. As Belden Lane puts it in “The Solace of Fierce Landscapes,”

The threat of desert landscape—from its grudging stinginess with water to its poisonous lizards and waiting vultures—has a way of eliciting the sharp, lean qualities of attentiveness and indifference. Both are desert virtues, honed by exposure to the elements. The one is necessary for survival. No one lasts in the desert without constant attentiveness to exterior and interior landscapes alike. One must keep an eye out for landmarks, the position of the sun in the sky, tracks in the sand, threatening clouds. But equally important is staying attuned to one’s inner condition—the progress of fatigue, the irritation of blisters, the forgetfulness to which the mind is prone, the slow rise of panic at the fear of being lost. The desert fathers and mothers spoke of this attentiveness as agrupnia, the spiritual discipline of “wakefulness.”

I’m not going to give up hiking in the desert. I’ve done a lot of it, especially when I hiked the Israel Trail and covered most the Negev and Arava deserts alone. But my recent experience was a teacher of several things:

As Edward Abbey, author of Desert Solitaire said, “The desert doesn’t give a shit.” It’s a harsh place. A beautiful place, a place where your soul can expand, but it’s not there to take care of you.

One thought on “A Hike in the Desert”