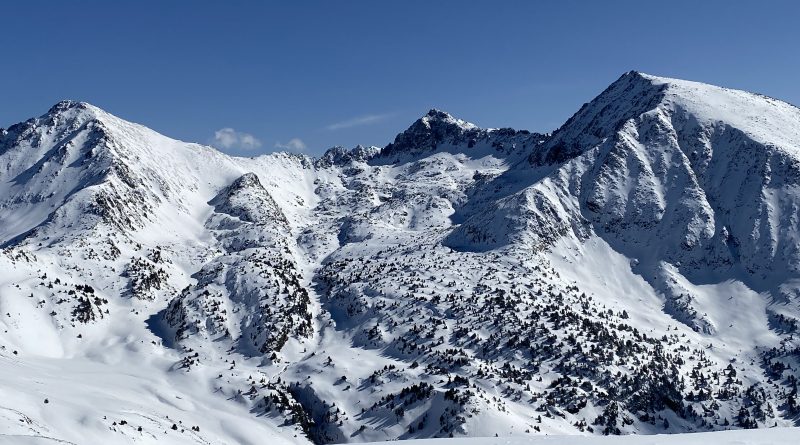 Last week I had the opportunity to participate in a “Mindfulness on the Mountain” skiing and meditation retreat in Andorra (a tiny country in the Pyrenees between Spain and France, about a three-hour drive from Barcelona). The retreat was led by monastics, both monks and nuns, from Plum Village, a network of centers and monasteries that was started by the late Thich Nhat Hanh (“Thay”).

It was an amazing five days. We started each day at 0630 with a half hour of sitting silent meditation, followed by a half hour dharma talk (one of the monks sharing Buddhist teachings). We’d then walk to breakfast in silence, practicing “mindful walking” or walking meditation. We’d at least start our meal in silence; sometimes the whole meal was in silence.

After breakfast we headed for the ski slopes, divided into groups of 8-10 people based on skiing ability (there were about 50 people in total at the retreat). My friend Charlie, who invited me on this epic adventure, was in a group that skied with the nuns. I was in the most advanced group, and got to ski with Ramon, one of the key organizers of the retreat, and former head of the Spanish Ski Federation as well as of the Buddhist Association of Spain.

Skiing with Ramon was amazing. In addition to sharing great tips about mindful skiing, he shared great tips about skiing. Even though I’ve been skiing for almost 60 years, there’s always more to learn.

We had lunch on the mountain, and after lunch we had free time, which most people used to do more skiing.

There was typically a program around 4:30 or 4:45, although I mostly skipped the program and spent the time in the outdoor hot tub and sauna.

Dinner at 6, with “mindful walking” to the restaurant which was a few hundred meters away. After dinner we had another half hour of sitting meditation and on three evenings had sessions of “dharma sharing,” where people shared how the experience was going for them; one night instead of dharma sharing there was a Q&A session with all the monastics.

It was great hearing people’s stories. We also heard about the journey to monk/nun from a few of the monastics. Really fascinating group of people. Everyone has a struggle. Everyone has had suffering. Compassion is so important.

Mindfulness is the antithesis of multi-tasking. Whatever you are doing, do it fully. Sometimes that’s just sitting and getting in touch with your breathing and your body. Walking. “Mindful discussions” where you really pay attention to what people are saying, as opposed to thinking about what you want to say next.

We also had teachings and worked on dealing with emotions. For some people, that meant coping with strong emotions. For others, like me, it was more about paying attention to emotions that I often ignore.

I had one incredibly powerful experience on a chairlift:

I was riding up a chairlift with three women from our group, and one of them started talking about how much she appreciated that her mother took her to the mountains when they were young, even though they lived in the Netherlands and not so close to mountains, and she started crying. Then I started thinking about how I get my love of the mountains from my Austrian mother (who died over ten years ago), and I started crying, and the other two women were being supportive of us, and they started crying too. We got off the chairlift with four of us having tears streaming down our faces. That’s never happened to me before!

Mindfulness is a state of mind I think all faith traditions aspire to. I found the retreat gave me tools – and refreshed my approach – so that my prayers are more mindful.

One challenge I had is there wasn’t really time in the schedule for me to practice my usual Jewish spiritual practice of prayer. I squeezed in some here and there, but it was tricky. Saturday morning I decided my way of praying was what I really needed – so instead of joining the silent sitting meditation, I sat in the back, wrapped in my tallis, and spent the time on Jewish prayers. Was slower, more mindful, and more connected than my prayers have been in a long time – a much more spiritual experience.

I was also reminded of how much better food tastes if you really pay attention to what you’re eating. Meals in silence, or at least one course in silence, helps create space for that to happen. All the food was vegetarian, which made life easy for me.

Andorra is beautiful – the Pyrenees are very impressive. Grandvalira is a very nice ski area, quite large. The hostel we stayed in, Mountain Hostel Tarter, was clean and comfortable.

My only complaint about the retreat was the total lack of COVID protocols. There were only four of us who wore masks at all. I wore mine whenever the total group was meeting, but it’s not practical to wear them when you’re sleeping (I was in a room with four other guys) or eating. I tested positive for COVID on my arrival back in Israel. Fortunately, I had my second booster about a month ago – seems like I only had minor symptoms for less than 24 hours (started feeling something on the flight). But I’ll be in quarantine for at least five days.

I am truly grateful to the brothers and sisters for their teachings, to Ramon for the skiing and organization, and to everyone who participated for their open and compassionate presence.

I read Thay’s book “You are Here,” and was reminded again of how many similar teachings can be found between Buddhism and Judaism. Yes, there are a lot of differences too, but I like to focus on the common ground! Here are a few things I’ve observed, some from the retreat, some from the book:

Prayer for Those who Contemplate Suicide