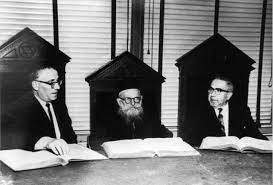 If there is a group debating an important matter, who should speak first? The oldest most experienced people in the group? Or the youngest most junior people?

I think that intuitively most people would say the most experienced people. They are likelier to have the right answer. The junior people can speak up if they have something to add that the senior people may not have thought have.

That’s not necessarily the right answer though.

This week’s Torah reading Shoftim, contains a set of laws that in many ways form a constitution of sorts for the Israelite nation as they are getting prepared to enter the promised land.

There are rules for judges, kings, prophets, requirements for witnesses, rules of war, procedures to be followed in unsolved murders.

This week’s parsha begins a commandment to have a legal system:

You shall appoint magistrates and officials for your tribes, in all the settlements that your God is giving you, and they shall govern the people with due justice.

We have a famous verse in this week’s parsha that reiterates the importance of having a sound system for administering justice:

Justice, justice shall you pursue, that you may thrive and occupy the land that your God is giving you.

The Torah only gives us the barest outline of what’s needed. There is an entire large volume of the Talmud, Sanhedrin, that provides all the details about how the Jewish justice system is supposed to function including details such as number of judges required to judge different types of cases, interrogation of witnesses, procedures that are to be followed.

Referring to our original question about who should speak first there is a passage in the Mishnah that says,

In the discussion about this Mishnah, the Talmud says,

Rabbi Adin Steinsaltz explains why in his commentary. He says it is because Rabbi Yehuda HaNasi was so respected that no one would ever dare contradict him, so therefore they started with the junior people so that Rabbi would go last and not influence the expression of the others.

This is a lesson that’s relevant not only in court cases, but in many others spheres of our life as well.

The kabbahlists, the Jewish mystics, speak of the importance of tzimtzum, contraction.

In Lurianic kabbalah the first step in the creation of the world was tzimtzum, God contracting to create space where the universe could be created. If God filled all the space there was no place for anything else, so the first thing that had to be done was to create space for creation. They make an analogy to rays of light from the sun. Inside the sun rays of light would be invisible, they would not exist, they would simply be part of the sun. It’s only when the rays of light have the sun that they can be perceived as something separate from and independent of the sun.

In a situation such as a board meeting if the people who have been on the board the longest dominate the conversation all the time, the newer members of the board may be afraid to speak out, lest they seem ignorant. Yet fresh ideas which can have a lot of value may come from the new people who are not excessively steeped in the ways that things have always been done.

I co-founded a high-tech telecom equipment company in the 1980s. When I sat in meetings with the engineers I was definitely like one of the judges sitting on the side. I wasn’t even an engineer. Compared to the technical team I was pretty ignorant on the technology. But it turned out that ignorance was a blessing in disguise. As we were wrestling with how to solve a thorny technical problem, I tossed out a suggestion that turned out to be the answer to the problem. It didn’t occur to the engineers because they all “knew” the answer but the normal answer didn’t work. My suggestion was out of the box, and it saved the day, and it came from the person “sitting on the side” who wasn’t already trained in the conventional way to do things. If you want the techie details, ask me at lunch.

Similarly if teachers do tzimtzum their students may in the long run learn more deeply and effectively. If a teacher jumps in and tells someone what the answer is, all too often the learning may go in one ear and out the other. But if a teacher gives the student the space to figure it on their own, perhaps providing data or sources, but not just spoon feeding the answer, the learning will be deeper.

I see this as a flight instructor when I’m teaching people how to land an airplane. I have to do tzimtzumand sit back and let student pilots make an occasional bad landing so they learn what works and what doesn’t. If I take over the controls every time it looks like the student might make a hard landing they will have a much harder time figuring out what works and what doesn’t work. My job as a flight instructor is to use my judgement and take over when a landing would be dangerously bad, but not every time a landing would be a little firmer than desired.

The same principle applies with being a parent, and it can be one of the most nerve-wracking parts of the parenting experience. We all, of course, want to protect our children from hurt, whether physical or the pain of a broken heart. But of course it is impossible for us to protect them from every tumble and from every bad relationship. There are some things our children will simply have to learn on their own, and all we can do as parents is to try and give them the background and information they need and then step out of the way and let them figure things out for themselves.

It can be very difficult for knowledgeable, competent people to do that tzimtzum, to step aside and let the junior people speak first. I don’t know if those engineers in my company would have paid the same level of attention to me, or even would have invited me to the meeting if I wasn’t the CEO. But it’s not always the smartest most experienced person in the room who will have the best answer. That was true in the days of the Talmud 2,000 years ago, and it’s still true today.

Shoftim 5765 — A bribe blinds the eyes of the wise