The Muslims call us Jews “people of the Book.” It’s not a bad description. Look at the elaborate ritual we went through this morning with our book—quoting verses and saying prayers before taking the book out of the cabinet, carrying the beautifully dressed book reverently around the synagogue, people kissing it as it passes by. When we read from our book, the Torah, we have one person reading, one person blessing, and two people
following along—all to show respect and honor to our Holy Book. We say our most heartfelt prayers – prayers for healing, prayers for peace, prayers for our well-being – while we have the Torah out. Why? No doubt because we feel we are in the presence of something holy, and therefore feel God’s presence more manifest.

We show the Torah all that respect because it has been the heart of Judaism for over 2000 years. Much more than an instruction manual for how to live, it tells our story. The mystics believe that this book is the bridge between God and Man—that God put some of God’s self into the Torah, and we access God through the Torah.

A visitor to the synagogue who didn’t know much about Judaism who happened to show up today and follow along with the translation of our Torah reading might wonder why the heck we make such a big deal over this book. The vast majority of this week’s parsha is taken up with two issues: the shmittah year, the commandment to let the land rest one in every seven years; and regulations regarding how we are to treat slaves. The dispassionate and
uninformed modern observer would look at these two issues, and say one is irrelevant and one is offensive. The laws of shmittah seem irrelevant to modern people who are not farmers who are not living in Israel. The stuff about slavery is even more challenging. African-Americans continue to struggle with the legacy of slavery. We are appalled that slavery
continues to exist in the world today.

Even though slavery is technically illegal everywhere in the world, it is estimated that there are more people living as slaves than ever before in history – 27 million, by one estimate.

One of the forms of slavery described in this week’s Torah reading—when a person mortgages himself to a loan and defaults on the loan, in essence selling himself into slavery—is the commonest form of slavery in the world today. It happens all the time in rural areas of India and Africa.

We even have novel forms of slavery not described in the Torah–women enslaved to work in the sex trade. And this happens not just in places like Africa or Southeast Asia. There are women who have been enslaved overseas and imported to places like Tel Aviv and Los Angeles. It is estimated there are 20,000 people living as slaves in the United States—where slavery was legally abolished nearly 150 years ago.

To understand this question, we need a fuller understanding of what not just the Torah says, but what the Jewish tradition has to say about slavery. When we Jews read Torah, we read a layered text. We don’t just read the Torah itself—rather we read the Torah, and the last 2,000 years of commentary on the Torah, and we add our own commentary as well. When we read the Torah, we read it at multiple levels. We go for a walk in the orchard, the Pardes, of Torah. Pardes is a Persian word which means orchard—it’s also the source of the word Paradise. Pardes is an acronym for the multiple levels of Torah—Pshat, or the plain meaning of the text; Remez, or allusion; Drash, the interpretation of the Torah; and Sod, the
secret inner meaning of the Torah.

When we read the pshat, the plain, literal meaning of this week’s Torah portion, it’s very troubling. The Canaanite slave was a slave forever—the Torah tells us his descendants work for us, and the Torah also says we can treat him harshly. Yes, he was treated better than slaves in other places—but he was still a slave. Read at the level of pshat, this week’s
parsha seems to contradict what we believe about how human beings should be treated.

When we read the Torah, we have to go beyond the pshat. The remez, the question of what might the Torah be alluding to, could be to ways in which we allow ourselves to become slaves to other things in our lives—whether it’s money, jobs, or other things that we allow to control us. The drash, the interpretation could be to explore ways in which these laws are an improvement over the ways slaves were treated in other countries. To find the sod, the secret inner meaning, requires more digging.

To find the sod of troubling verses, like those describing slavery, we need to understand the message in its context, and look for how we might apply principles from elsewhere in the Torah, and look at ways the rabbis have dealt with some of these issues.

When we read what later rabbis have said about slavery, we get different sense of the concept. The Torah was written in a time and place when slavery was a basic social institution; as such, the Torah does reflect things that were happening in its time. Those kinds of teachings represent the “outer garment” of the Torah. The essence of the Torah,
however, is not simply the outer garment, no more than your clothes tell what you are about. The essence of Torah is the principles we learn through study.

Even though slaves were definitely viewed as much less than free men, the Talmud brings a story that when Rabban Gamliel’s slave Tabi died, his students come and offered him condolences, just as if a family member had died. When one of the other students protested that we do not mourn for slaves, Rabban Gamliel said that Tabi was a good man. We see that even a slave can be a good man, can be a friend. Elsewhere in the Talmud it says that Tabi was worthy of being ordained as a rabbi—we learn some of the laws of Sukkah from the slave Tabi.

Fast forward 1,000 years, and the great rabbi, Maimonides takes the rules of slavery further. According to Rambam:

“It is permitted to work an eved K’nani with rigor. Though such is the
law, it is the quality of piety and the way of wisdom that a man be
merciful and pursue justice and not make his yoke heavy upon his slave or
distress him, but give him to eat and to drink of all foods and drinks.
The sages of old let the slave eat of every dish that they themselves ate
and they fed… the slaves before they themselves sat down to eat…. Thus
also the master should not disgrace them by hand or by word, because
Scripture has delivered them only to slavery and not to disgrace. Nor
should he heap upon the slave oral abuse and anger, but should rather
speak to him softly and listen to his claims.”

Rambam acknowledges that according to the law, someone can treat a Canaanite slave harshly. But he applies the principles we learn from the Torah to tell us that even though that may be legal, it’s not proper. We are obligated to treat the slave kindly. We are to remember that even the slave is created b’tzelem Elohim, in the image of God, and should be
treated with dignity.

In still later generations, attitudes toward slavery continued to evolve. Rabbi Jonathan Sacks, chief rabbi of Great Britain, maintains that in fact God wanted us to learn to abolish slavery on our own. But why? To go back to our earlier question, why didn’t God just ban it in the first place?

Rabbi Jonathan Sacks, chief rabbi of Great Britain, says “These laws do not abolish slavery, but they do create the conditions under which people will eventually learn to abolish it.”

Maimonides, Rambam in his Guide to the Perplexed, explains it as follows. He describes how people go from being very soft, and being totally dependent, and being fed milk, to becoming stronger and more self-sufficient in a gradual process. He then says “Many precepts in our Law are the result of a similar course adopted by the same Supreme Being. It is, namely, impossible to go suddenly from one extreme to the other: it is therefore according to the nature of man impossible for him suddenly to discontinue everything to which he has been accustomed.”

It would have been impossible for people to discontinue animal sacrifices and slavery overnight. But the Torah teaches us values that put us on a course to eventually do away with certain practices.

Nowadays, we go further than Rambam. We don’t say that slaves should be treated nicely, we say there should be no slaves. What’s more, I would say that abolishing the institution of slavery brings us a step closer to redemption.

In Isaiah it says “There will not be in those days any famine, war, jealousy, or quarrel, because the good things will be in plenty and even luxuries will be found everywhere. All people will busy themselves with trying to know the Lord.” Such a vision of the world—a world of peace and harmony and plenty—is not compatible with slavery. The prophet tells us in the future EVERYONE will live in plenty—not just the Jews, and not just those people who are fortunate enough to have been born free.

Studying about slavery can remind us that slavery still exists in the world around us. I encourage you to be attentive to whether products you purchase may have been made with exploited labor, and I encourage you to donate to organizations like Free the Slaves which work to eradicate slavery.

May God help us create a world in which slavery is truly abolished and we can study these verses in the Torah about slavery as strictly applying to history or to the remez, the allusion, of psychological processes within us. 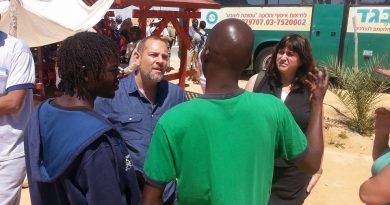